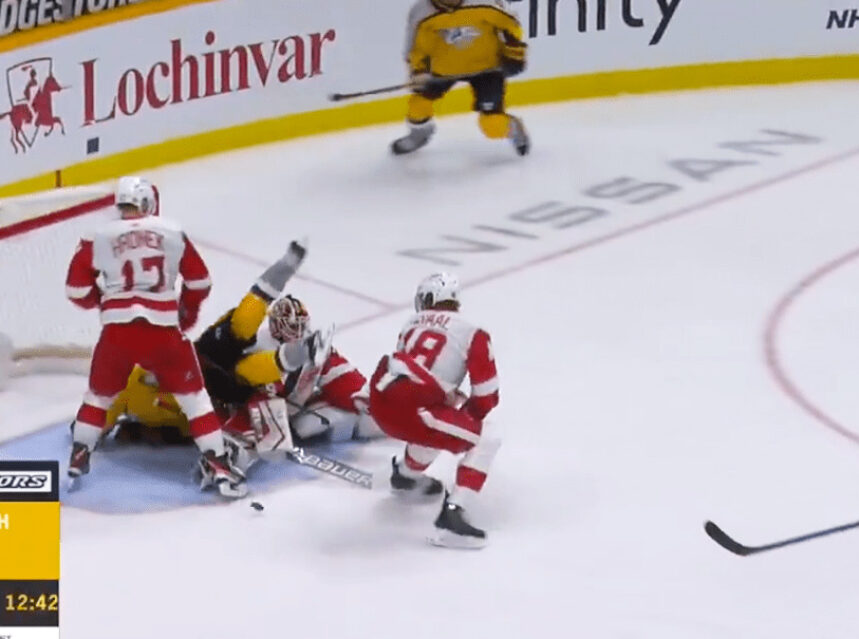 The NHL has fired referee Tim Peel for something he said during Tuesday night’s game between the Red Wings and the Predators. The veteran NHL ref was mic’d during the game and was heard saying that he “wanted to get” a penalty against Nashville, implying that he was advocating for a “make-up call.”

Essentially confirming something pro hockey analysts have said for decades – although not as much over the past few years – during live telecasts when a referee “evens up” a call especially after making a wrong call.

“Nothing is more important than ensuring the integrity of our game,” said NHL Senior Executive Vice President, Colin Campbell in a press statement.

Early in the second period of Tuesday’s game, with the Predators up 1-0 thanks to a first period power play against the Wings, Peel called Preds forward Viktor Arvidsson for tripping Jon Merrill. Arvidsson was noticeably angry afterwards because it appeared the Merrill had taken a dive, and this was made evident in the video replay.

Peel then could be heard through his live mic saying: “I wanted to get a f—ng penalty against Nashville early…”

The strangest thing about the “even-up” call statement, Preds forward Matt Duchene points out that when Peel was caught on mic, he was actually talking to Predators’ Filip Forsberg at the Nashville bench.

“Tim’s conduct is in direct contradiction to the adherence to that cornerstone principle that we demand from our officials and that of our fans, players, coaches and all those associated with our game expect and deserve,” said Campbell.

Referee Tim Peel, 54 has officiated more than 1,300 regular-season games and 90 playoff games and was expected to retire at the end of this season.

What did NHL ref say to get fired, why was NHL ref fired