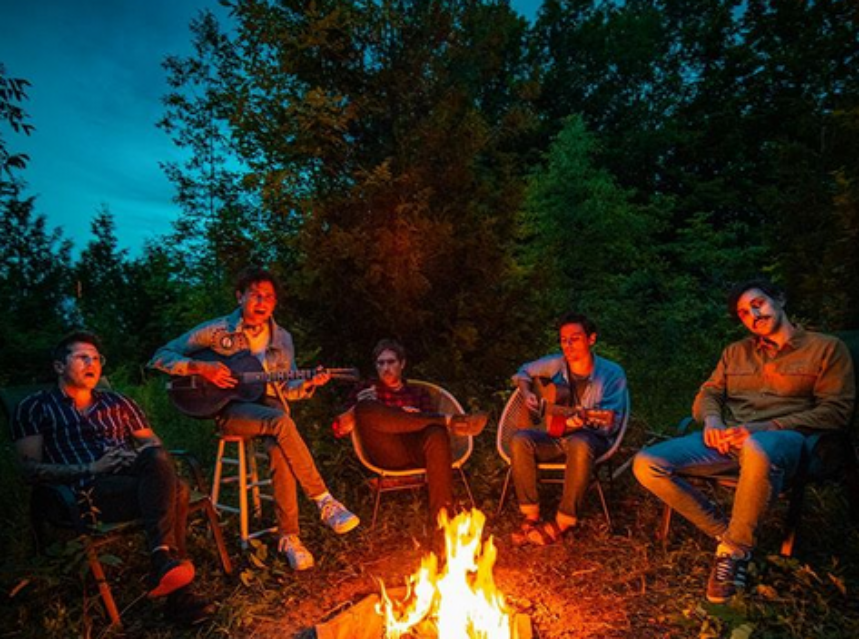 It’s incredible to think that fresh off the heals of a pandemic one of Canada’s hardest working bands, Arkells have released a new album today. It’s called “Campfire Chords” and it was inspired by the ‘Flatten The Curve’ music classes that Max Kerman and the lads hosted, to swap chords, lyrics and stories with fans and other Canadian notables.

During their COVID downtime the rocking Hamilton hearthrobs, Arkells have been anything but down and they have took it upon themselves to lift the spirits of fans during the lengthy time of worldwide crisis and the suspension of live concerts. Due to social distancing and isolation rules imposed during the pandemic, the band was forced to find new ways to communicate and share with their huge Canadian fan base.

Max, Mike, Tim, Tony and Nick of the Arkells took to Instagram today to shine some light onto how their new 19-song album, (that almost qualifies as a greatest hits) evolved:

“We’re always trying to interact with the world in a way that feels true to us,” said outspoken lead singer, Max Kerman. “When quarantine sent us home, the world got a little more quiet. In 2020, a lot of the music that brought us comfort was a little more tender, a little more sweet.

“We’ve always had to make our luck. If there’s an ethos to our band it’s that if we’re putting in good and honest work, one thing will lead to another and we’ll have something to show for it.  We’re always building on the last thing we did.”

And that they did, with ‘Campfire Chords” you have record that you can’t stop listening to and singing along with, whether it’s in the car or looking out the window doing the dishes. The reimagined fan favourites come across catchier than ever, and serve as a final statement to the Flatten The Curve Music Classes demonstrating that this is the way it’s done. Surely it wasn’t the band’s intention to set a new bar for acoustic and orchestrated versions of these popular tunes, it was more of a case where the band was inspired by all the new takes of their catchy numbers.

There are so many gems and favourites on this album in addition to a new surefire hit with a song called “Quitting You” which will tug at the emotional heart strings of anyone who has been in love and needs to let the person go despite still being completely in love with them. It has a country flair with slide guitarand fiddle as well as catchy backup vocal parts, but it certainly will be one of those ‘Bobcaygeon-like” songs that Canadians will enjoy singing around the campfire.

In fact, the band loves it so much that they chose it for a social media song challenge. Singer Max Kerman posted a video to say “One of the hardest things to do is write a simple song that you can plar around the campfire” and that “Quitting You” is as simple as it gets.” He shared the lyrics and chords and asks fans to post cover versions with #ArkellsQuittingYou either solo or with friends or band. The top 20 receive a prize consiseing of a signed tab sheet and super retro “Campfire Chords” embroidered badge. The contest ends August 31.

One of the songs that stands out for me is “Don’t Be A Stranger” (from Rally Cry) complete with an organ, and Beatles-like orchestra before kicking into a Pixies “Where is My Mind” – like groove. The song really takes on a new life with this version and who doesn’t love the reference to Oshawa? “Eyes on the Prize” is also a standout with Neil Young-esque harmonica and powerful backing gospel singers. It’s simply beautiful and catchy and would make another great addition to a campfire repertoire at the cottage.

Also check out the new take of “Come to Light” which is pretty much an all out well orchestrated country tune now.

Arkells laid down a timeline on Instagram for how the “Campfire Chords” record came to be.

But they go on to explain that “none of these things happen without the thing before it. And to us, it’s a beautiful thing to know that everything is connected.”

Arkells say they really like the idea of stripping back the songs but with their demanding tour schedules they never had time to revisit and re-imagine them… until the pandemic hit.

“We’ve never had time to make an “acoustic record” because we were too busy playing shows and focusing on new music,” said Kerman. “But we also knew that they felt really good to play in a stripped back way. All of our big rock’n’roll songs start with an acoustic or piano, so heading back to that place isn’t too much of a stretch. Finding the right “rhythm” for the stripped back arrangements is usually the trick, and there were a few songs that proved to be harder to get comfortable with. We scrapped “American Screams” for that reason. We wanted a healthy mix of our bigger songs and deep cuts. Songs that would be fun to listen to around the campfire, or in your back yard, or at a park. We added some lost verses to “I’m Not The Sun” and “Whistleblower” that never made the original version.

“All of this is to say, Campfire Chords was a joy to make,” the band concurs.

“Being a part of your lives is the best part of being in a band, so whether you’re covering one of these songs, or jamming to it around the campfire, let us know!

“It’ll keep us connected with you until we see each other in real life again.”

Arkells “Campfire Chords” is available as of today on all platforms. Give it a spin and expect it to stick with you for hours afterwards, like a marshmallow to a skewer.