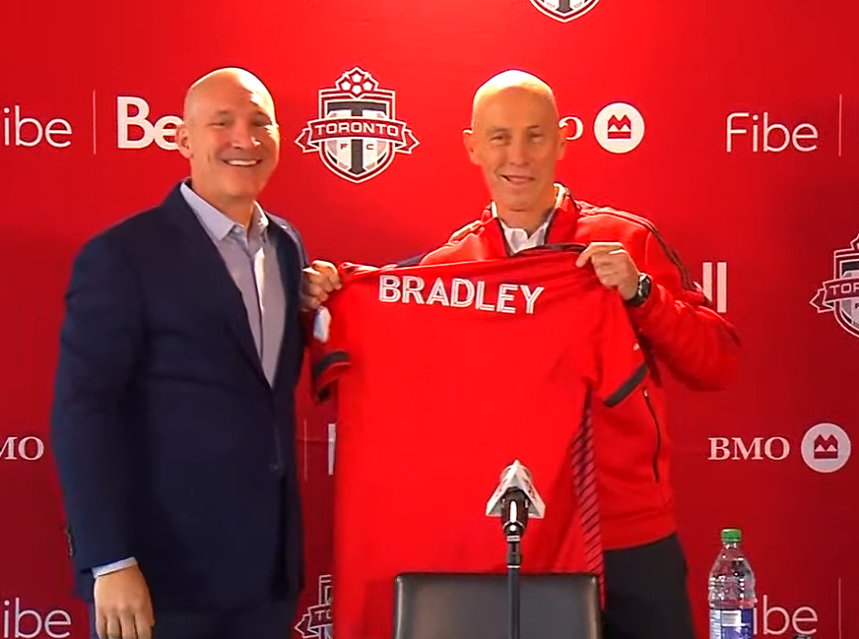 Toronto FC just announced today the hiring of Bob Bradley as the club’s head coach and sporting director. Bradley, 63, is a three-time MLS Coach of the Year, becomes the 12th head coach in TFC history. He is also the father of TFC Captain, Michael Bradley.

Bradley brings over 20 years of head coaching experience and major achievements to Toronto. In addition to his work as a club coach, Bradley has coached both the United States and Egyptian national teams. Canada will mark the sixth country where Bradley has served in a head coaching role.

“We are excited for Bob to get to work,” said Toronto FC President Bill Manning. “We are entering an extremely important offseason and know we have a team that needs a significant makeover. Bob has experience putting teams together and in getting them to perform at a high-level. He understands the expectations and standards of TFC and is ready to take on this challenge.”

Said Bradley, “I want to thank Bill Manning and the board at MLSE for trusting me with this project. I have seen firsthand the passion that Toronto has for football and the way the club has connected with the city. I look forward to putting a team on the field that will make our fans and supporters proud.”

Bradley joins TFC with the third-most regular season wins (182) in league history and has led teams to an MLS Cup (1998 Chicago Fire), an MLS Supporters’ Shield (2019 Los Angeles FC) and two US Open Cup (1998 and 2000 Chicago Fire) titles during his years in the league.

When asked about how he feels about coaching his son again, Coach Bob Bradley said, “Michael’s in the back end of his career. I’m excited and the part of coaching him again, pushing him, challenging and seeing how he responds that part will be great.”

In the international game, Bradley had a 43-25-12 record as the head coach of the U.S. National Team from 2006-2011 and a record of 22-8-6 as the head coach of Egypt from 2011-2013. The New Jersey native led the U.S. to the 2007 CONCACAF Gold Cup title and qualified the US for the 2010 FIFA World Cup, where they won their group ahead of England, Slovenia and Algeria, before bowing out in the Round of 16 to Ghana. Bradley also led the US to the final of the 2009 FIFA Confederations Cup in South Africa, where they were defeated 3-2 by Brazil. It remains the only appearance by the US men’s team in a FIFA sanctioned final. As the coach of Egypt, Bradley’s Pharaohs had a perfect 6-0-0 record in the first stage of African World Cup qualifying for Brazil 2014 but were ultimately eliminated by Ghana in a two-game aggregate.

“One of my strengths is figuring out how to engage people, the ability to challenge people and figuring out how we can grow. In terms of football, Bradley says he is focused on “What style? How will we put it all together? How the team is going to win the ball.”

In the press conference, Bradley says he sees similarities between his tenure at Chicago and coming to Toronto in terms of finding the right setting for new players coming along and getting the most out of more established and experienced players.

In MLS, Bradley was the first head coach in Chicago Fire history and led the expansion team to the 1998 MLS Cup Championship and U.S. Open Cup Double while earning his first MLS Coach of the Year award. The Fire also played in the 2000 MLS Cup final, where they were defeated 1-0 by Kansas City. Bradley served as the head coach for the New York/New Jersey Metrostars (now New York Red Bulls) from 2003-2005 and Chivas USA in 2006, where he was named the MLS Coach of the Year for elevating the second-year team into the playoffs for the first time.

Named as the first coach in LAFC history in July of 2017, Bradley led the club to 57 points in 2018, the most points ever recorded by a first-year club in league history. In 2019, LAFC set what was then a league record with 72 points in the regular season. The 2019 edition of LAFC led MLS with 85 goals while also allowing the fewest goals (37) of any team in the league. The +48-goal differential was 27 goals better than any other team in the league. Bradley earned his third MLS Coach of the Year award following the record-breaking regular season and capturing the MLS Supporters’ Shield in 2019. In 2020, LAFC advanced to the final of the Scotiabank Concacaf Champions League, knocking off three of Mexico’s most famous teams (León, Cruz Azul, and Club América) before losing 2-1 to Tigres UANL in the final.

The new appointment comes one day after the announcement Javier Pérez will not return as head coach, after stepping into the head coaching role when Chris Armas was relieved of his duties on July 4. Toronto FC had one of its worst seasons finishing second last in the Eastern Conference with 28 points (6-18-10). Aside from their inaugural year in 2007, their next worst season was in 2012 when they recorded just five wins and 23 points.