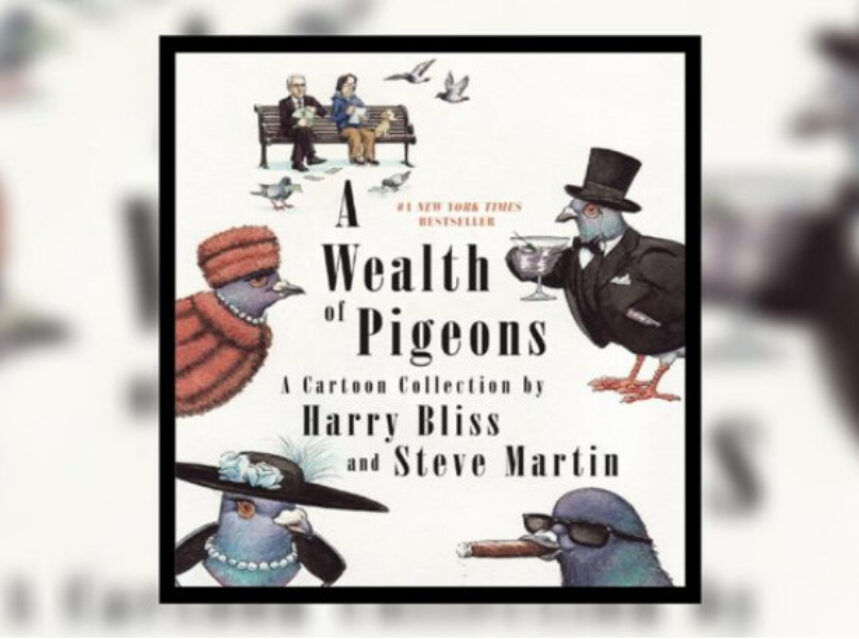 A Wealth of Pigeons – Steve Martin is a comedian of many talents. Once regarded as a “wild and crazy guy” back in the mid and late 1970s, Martin has spent the last 40 years transforming himself into a true renaissance man. Actor. Comedy writer. Stand-up comedian. Musician. Recording artist. Novelist. Best-selling author.

And now you can add the label “cartoonist” to his impressive resume. Well, sort of. It all began when Martin bumped into Francoise Mouly, the art and cover editor for The New Yorker, and told her that he had an idea for a possible cartoon for the magazine. Mouly suggested that he contact staff cartoonist Harry Bliss and have him draw it. After the initial contact between the two, Bliss committed Martin’s idea onto ink and paper. Martin was so impressed with the end result, Bliss asked him if he could do him a favour and think of some humorous captions for several orphan cartoons that he drew. It was the chemistry between Martin’s unique sense of humour and Bliss’ talent for cartooning that established a creative partnership that resulted in a book of amusing, entertaining cartoons called A Wealth of Pigeons.

This book is a selection of the best of the 150 cartoons that they collaborated on, in which the evolution of most of them occurred mainly through social media interaction (and a few face to face encounters). The subject matters vary, whether it be animals, pets, culture, word play, science fiction, or the bizarre with a dash of subtlety.

Some of the cartoons featured in the book make you instantly laugh out loud; others will give you a second or two of pause, reflection (or delayed reaction), before its humourous intention strikes your funny bone.

Some of my favourite cartoons from the book includes Vincent Van Gogh chatting with a young couple at a cocktail party and says to himself “My god, these two will talk my ear off”; a man who talks to a sad-looking dog at bar and tells it “Listen buddy, a lot of dogs accidentally wee-wee at Westminster (dog show)”; and a family of three space aliens are sitting down at dinner, and the father tells his son “Stop making crop circles in your food”.

A Wealth of Pigeons is a delightfully funny cartoon collection, and proves what can happen when two distinct comic minds come together for a common purpose. As well, it reinforces the idea that cartoons in particular (and visual humour in general) is still alive and well as a source of well-intentioned laughter. (Celadon Books, $35)