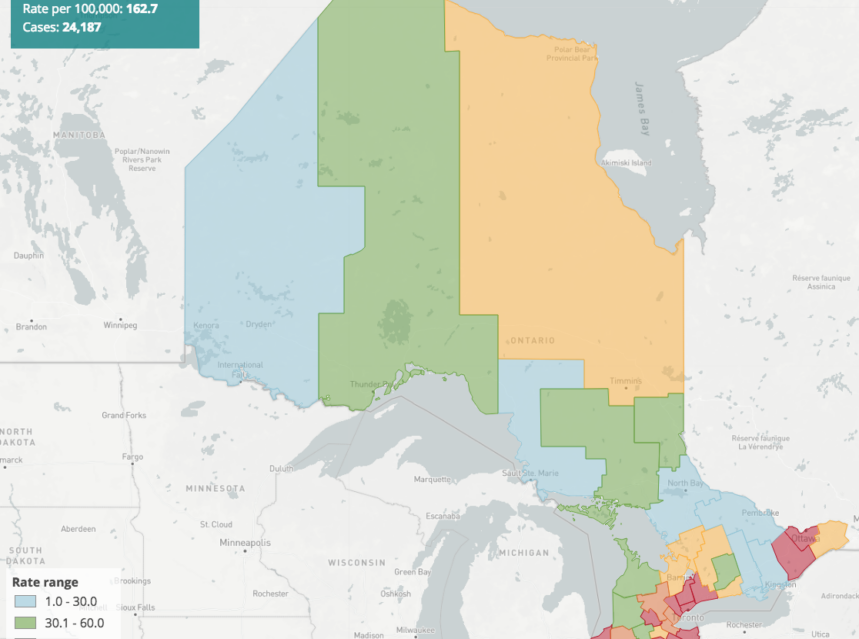 Premier Ford says “I will be like an 800 pound gorilla on your backs,” (if province doesn’t increase testing). “We need more testing!”

TORONTO, ON., May 21, 2020 — Today, Ontario reported 413 new cases of COVID-19, and that number is 23 higher than yesterday’s report, which was 37 fewer than the previous day. Confused yet? You should be. Basically, the province’s numbers continue to go up and down with no consistency. But for certain they are still significantly higher than the weekend numbers of 304 on Sunday and 340 on Saturday. There have now been 24,187 cases of COVID-19 reported in Ontario. Sadly, the province also reported 31 coronavirus-related deaths, which are 12 fewer that the previous day, raising the provincial death toll to 1,993.

If you take a look at the numbers over the past 14 days you will see that the 7-day average that had been dropping is now going back up slightly. The past seven days has seen an average of 321 daily cases while for the previous seven days the average was 339. So the case counts are slightly lower over the past two weeks but they have not dropped substantially.

How many tests did Ontario conduct

The province only conducted 10,506 tests which is an increase from the 7,382 tests performed on Tuesday and almost double the 5,813 that were completed on Monday. which is an enormous drop from the previous week, although they also only completed 10,000 tests on Sunday. Before that, Ontario tested over 17,000 people in Saturday’s report.

Premier Ford was asked about the low numbers and he expressed his frustration, “I am frustrated but I have confidence in the team. I will be like an 800-pound gorilla on their backs every single day if I have to until I see these numbers go up,” said Ford.

Premier Ford also said he wants to expand the testing for higher risk groups. “I want to see truckers tested, I want so see taxi drivers tested, I want to make sure that long term care (gets regularly tested). We can’t just test everyone and walk away. I want to go into the automotive sector and start testing people right across the province. I want to see food processing plans being tested,” he said. “As sure as I am standing here we are going to be ramping it up.”

While Health Minister Christine Elliott weighed in saying, “It is not like it will all of a sudden take a dive and it will be down to 200. It is going to be a slow, incremental path and all things considered Dr. Williams is of the view that is where we are heading and we are taking our cues from him,” she said. “But we will be watching this very closely as we get into next week and we really start to see what the effect is on public health from the changes that have happened as a result of stage one.

And when asked about what happens if the numbers continue to rise, Premier Ford said the province will reintroduce some of the restrictions that have been lifted as part of Phase 1 of Ontario’s Framework for reopening.

“If we see the numbers start spiking, we will roll things back in a heartbeat,” Ford also explained at Queen’s Park the day before. “The health and well-being of people in the province is my number one priority.”

Also two days ago at Queen’s Park, Premier Doug Ford had already begun expressing his concerns about low test numbers, saying emphatically, “We are going to ramp up the testing like this province has never seen,” Ford said at Queen’s Park on Wednesday. “I’m going to be all over this testing,” said Ford.

As long term care homes continue to be the hardest hit, the total number of active cases has dropped to 2,458 along with 1,564 staff members. A total of 287 outbreaks, 3 more than yesterday’s number reported in long-term care homes along with 1,452 resident deaths and 6 staff workers.

Hospitals have also reported 350 staff cases of COVID-19 which is the same number as yesterday. Sadly one more death was reported since yesterday increasing the death toll for hospital staff remains to 53. There now are 56 outbreaks in Ontario hospitals, which is up 4 since yesterday’s report.

According to hospital stats provided by the Ontario Ministry of Health from May 20 as of 4 pm, the number of actively hospitalized patients in Ontario due to the coronavirus is 984, which is down 7 from yesterday, while the total number of patients currently in Intensive Care is 155, down 5 from yesterday. 1170 patients were listed as being on ventilators. Also of note, 4,178 of the total 24,187 cases are healthcare workers.

Yesterday, Dr. Eileen de Villa, Toronto Medical Officer of Health said there was an
increase in the volume of lab tests we received over the past two days and there was an increase in daily COVID-19 case counts in long-term care homes associated with this increased testing.

Further analysis of these data gives us a better picture of our local situation
and shows that our community cases are still continuing to slowly decline,” said de Villa. “Overall, this news is promising because we can isolate those who are ill faster, prevent further spread, and continue to move forward.”

Toronto’s top doctor gave her opinion on whether or not face masks and face coverings protect people against COVID-19. “According to the Public Health Agency of Canada, wearing a face covering or a cloth mask in the community has not been proven to protect the person wearing it and is not a substitute for physical distancing and hand washing,” said Dr. de Villa. It is important to note that while the available scientific evidence on this subject is limited, there appears to be some benefit to wearing a mask in that it protects others from your germs.

“This is why at this time, I echo the recommendations shared earlier today by my provincial and federal health colleagues and I also strongly recommend wearing a mask in settings where you cannot physically distance from others, said Dr. de Villa.