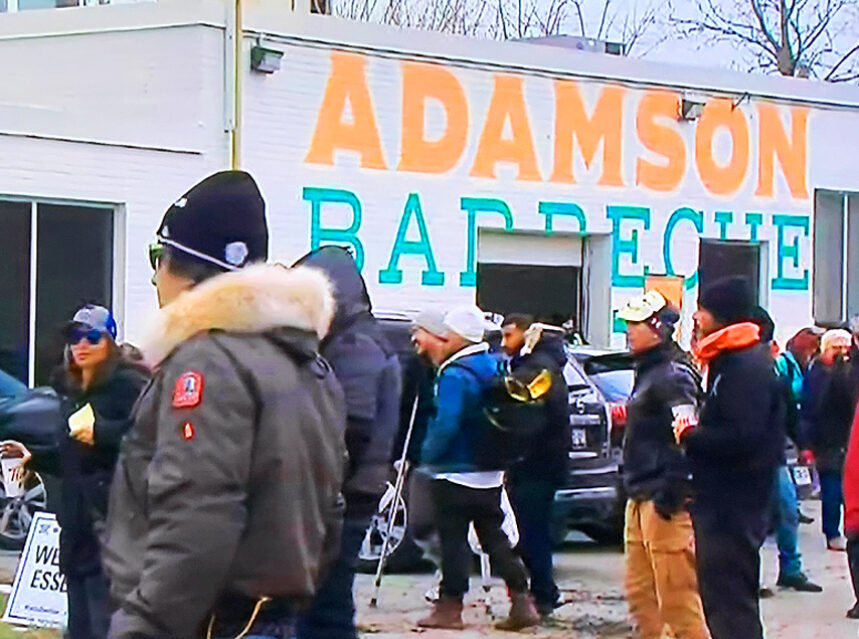 There was quite a commotion today on Queen Elizabeth Boulevard in Etobicoke, as people learned that Adamson Barbecue was going to defy provincial orders by offering indoor dining during the COVID-19 lockdown. The restaurant was eventually told to close indefinitely by order of Toronto’s Medical Officer of Health, Dr. Eillen de Villa, under Section 22 of the Health Protection and Promotions Act.

A large crowd gathered late this morning to either line-up to dine or to convey either their support or concerns about the west end restaurant being open. Uniformed police officers arrived on the scene to help bylaw officers deliver an order to to owner Adam Skelly for the closure of the premises. The officers were also there to manage the crowd and make sure things didn’t spiral out of control.

The crowds that formed earlier in the day were the result of an Instagram post by Skelley on Monday, to let people know he plans to open his restaurant despite provincial restrictions.

”Why we are getting singled out and the big, multinational corporations are all essential,” he said on Instagram. “Come on guys. Enough is enough. We’re opening.”

On a streamed call on CP24, Mayor Tory said, “This is a duly passed regulation put in place by the Government of Ontario to help address a very acute health pandemic, COVID-19, and there has to be respect shown to those laws and regulations by everybody. It’s all hands on deck here in terms of people showing respect for those rules, whether or not they agree with them,” said Mayor Tory.

While from the provincial press conference at Humber River Hospital, Premier Doug Ford said he just wants “the guy to shut down.”

The Premier did offer some sympathy for restaurant and business owners saying, “I can’t get angry at any businessperson. They are hurting right now and they are struggling and they are doing everything they can to stay afloat.”

“I’m not going to get up here and start pounding on a small business owner when the guy is holding on by his fingernails,” Ford said.

Ontario’s Premier also reaffirmed that, “They have to follow the rules. There can’t be rules for one group and not the other and I just wish that they’d just follow the rules. “If we let everyone open, we are going to be in worse shape,” Ford told reporters at the press conference.

Ford also said, “I’m not going to get up here and start pounding on a small business owner when the guy is holding on by his fingernails,” when asked why he is usually quicker to condemn other rule breakers. The Premier was quick to point out that those attending larger gatherings and private parties are “a different ball of wax.”

In terms of the closure of Adamson Barbecue, staff superintendent Mark Barkley told reporters at the scene, “The order was crystal clear. Toronto Public Health has closed this premise, it shall remain closed and the owner has been provided a detailed understanding of what his obligations are.”

“If he opens tomorrow we will be here. We will have a presence and we will ensure compliance with the order,” said Barkley.