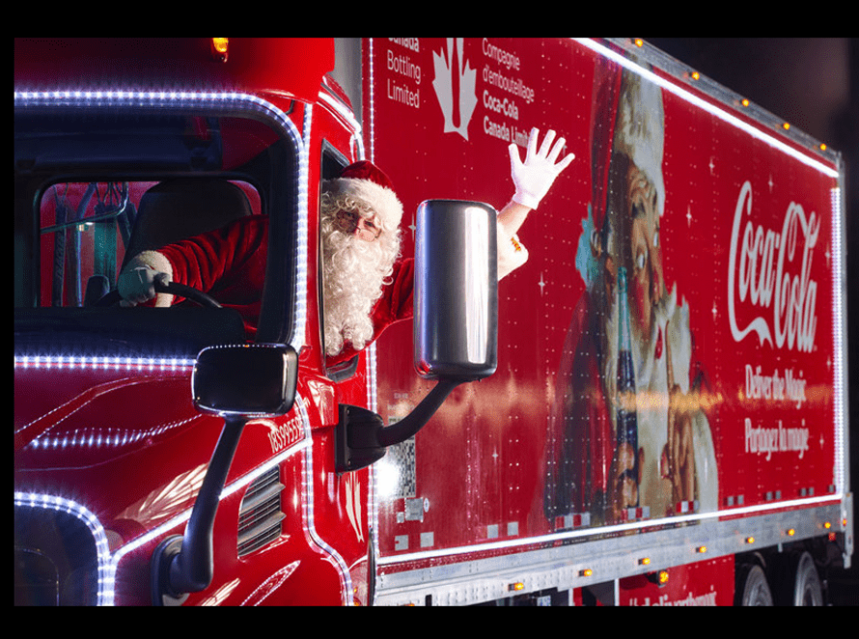 TORONTO, ON, Nov. 2, 2021 – Coca-Cola Canada Bottling announced today that, for the first time in Canada, Santa will be trading in his sleigh for an iconic red Coca-Cola Canada Holiday Truck, travelling from coast-to-coast and delivering seasonal joy and optimism. The Holiday Truck Tour is expected to pass through over 100 communities, safely bringing Canadians together and featuring some holiday magic and the big guy himself. After nearly two years of cancelled holiday gatherings, Coca-Cola Canada Bottling is partnering with The GenWell Project, the Canadian-led Global Human Connection Movement, to reinforce the critical importance of togetherness.

The Tour will kick-off with its first stop in St. John’s, Newfoundland on November 13th and the last stop in Victoria, British Columbia by mid-December.

Heading into the Holiday Season, unfortunately, nearly 10 million Canadians are feeling the loneliest they’ve ever felt in their life, according to a recent study conducted by IMI International.1 In the same poll, out of nearly 500 activities to choose from, attending a Christmas or Holiday event is the number one activity Canadians are looking forward to in 2021.

“There has never been a greater need for human connection and interaction than right now. By partnering with Coca-Cola Canada Bottling, we hope to inspire a Movement of Togetherness we know Canadians are all so desperately craving,” says Pete Bombaci, founder, The GenWell Project. “The issue of social isolation and loneliness was growing before the pandemic, but after nearly two years of various lockdowns and cancelled gatherings, it has magnified the issue for many Canadians. Now, every act of connection, big or small, brings communities together to improve that sense of belonging that makes us all happier and healthier.”

With almost 20 million Canadians having an increased desire to attend a community event, there is a real need for connection now more than ever before.3 In several markets across the country, Coca-Cola Canada Bottling and The GenWell Project will identify especially worthy community members who have been particularly impacted by the COVID-19 pandemic and celebrate them with a special Holiday Truck Tour experience and a legacy workshop designed to help inspire moments of togetherness, even after the Holidays are over.

“As Canada’s local bottler and a family-owned business, our Mission is to deliver optimism and create better futures for our communities,” says Todd Parsons, Coca-Cola Canada Bottling CEO. “After two years of being apart, we want to bring magic to our employees, customers, consumers, and Canadian communities. The Holiday Truck Tour is designed to enable those special moments of togetherness that we’ve all been sorely missing.”

The festively decorated, twinkling lights of the Holiday Truck is an iconic symbol of Holiday magic. The Tour will kick-off with its first stop in St. John’s, Newfoundland on November 13th and the last stop in Victoria, British Columbia by mid-December. At select flagship events, the Holiday Truck will be accompanied by onsite local musical guests and entertainment, snow globe displays, along with photo opportunities with Santa from a safe distance. In addition to these flagship events, Santa and his Holiday Truck will pass through over 100 communities across Canada on his journey from coast-to-coast.

While Santa and his elves prepare the Holiday Truck, Canadians can visit DeliverTheMagic.ca for full information on the tour, safety protocols, and to find out when the Truck will be stopping near them.