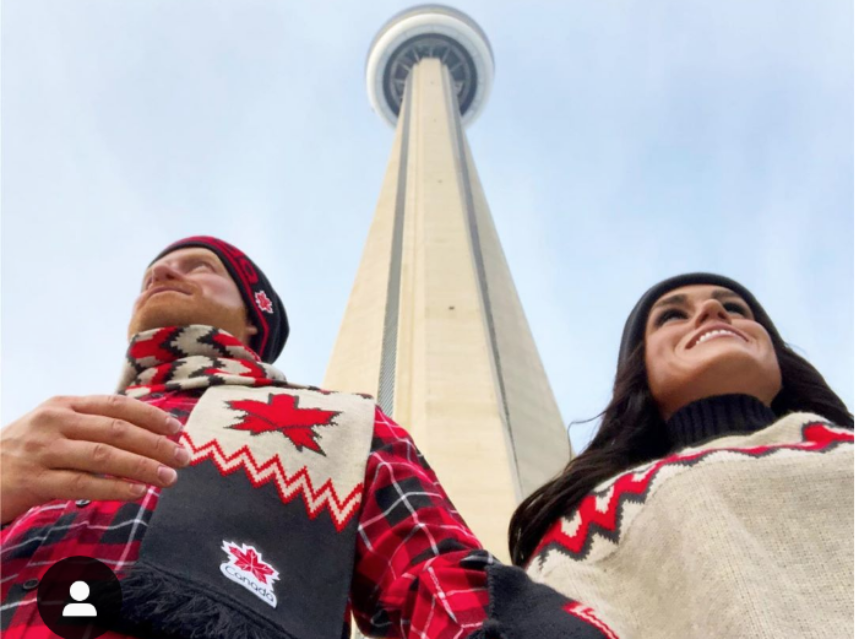 Freshly waxed Harry and Meghan do the six – An account popped up today on Instagram and Twitter featuring Madame Tussaud-like wax figures of Prince Harry and Meghan Markle. The @royalstakethe6 account has posted six images of the Sussex Royals striking tourist-like poses in stereotypical Canadian threads at recognisable Toronto locales.

On both social media platforms the Royals are captured in front of the CN Tower, Ripley’s Aquarium, and City Hall and they are also staged in an elaborate “Get Your Photo With Harry and Meghan” photo shoot at what appears to be Goodman’s LLP law firm. Another recognisable setting shows the Royals enjoying a pint at Steam Whistle Brewing.

At the moment no one knows the identity of who is behind this publicity stunts but it is a super marketing idea for highlighting Toronto’s and what inevitably sounds like Canada’s attractions.

The Canada logo figures prominently all over the distinctly Canadian clothing and accessories, which includes toques and scarves as well as a lumberjack flannel shirt and Canadian livery (red, white and black) sweater poncho.

The description of the account says, “Making a royal debut in #Canada🇨🇦 If you spot us on our travels, share your photos with #RoyalsTakeThe6!” So the implication is that the freshly waxed Royals will be popping up all over Canada.

And if Canada hasn’t already seen or heard enough from the Megxit ‘adventure’ it seems like more Canadian locales will be getting a visit from the Royal waxed figures althought with the “take the 6” moniker perhaps it will only be Torontonians who get to join in the fun.

Surely, it will help Canadians and tourists gain a renewed appreciation for the “second best” country in the world. You can follow their journey right here on Twitter and also here on Instagram.