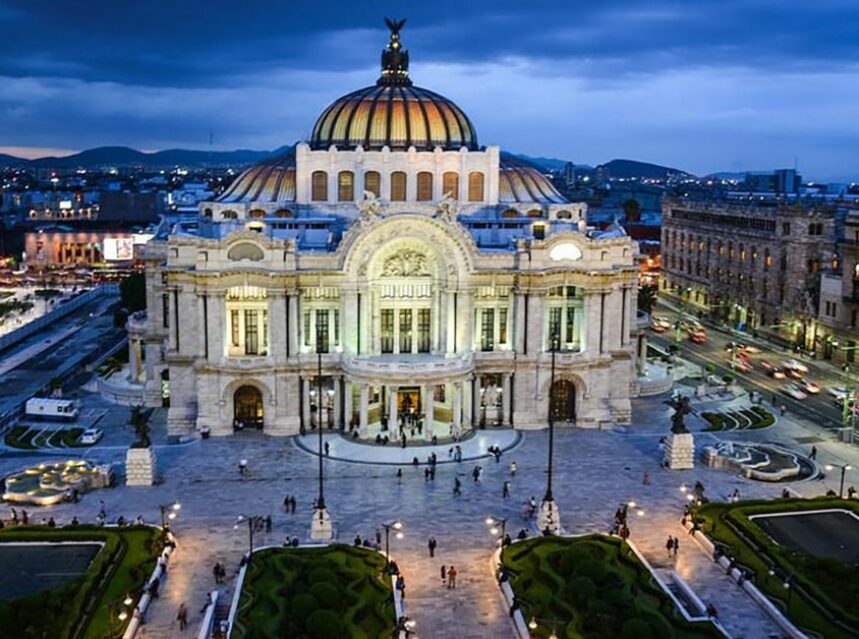 “Almost two and a half million tourists visit Mexico City each year, and for a good reason,” says Alejandra Flores from travelspring.mx.With a population of 20 million, Mexico City is one of the largest cities in the world. Not many know, however, that it is also one of the oldest cities in the Americas. As such, some of Mexico City’s best tourist attractions are located in its historic center, a UNESCO World Heritage Site with around 1,400 historic buildings from the 16th to the 19th century. Couple this with stunning scenery, delectable cuisine and lively nightlife, and you have an intriguing holiday destination. Here are just a few of the main attractions of Mexico’s capital city.

Completed in 1934, after 30 years in the works, the iconic Palacio de Bellas Artes amalgamates multiple architectural styles, including Art Nouveau, Art Deco, and Neoclassical. Some of the main features of the building include sculptures designed by Leonardo Bistolfi and Agustí Querol Subirats, stunning murals by artists such as Diego Rivera and David Siqueiros, and a curtain made from Tiffany New York stained glass. The building’s top floor is home to the Museo de Arquitectura and the Museo de Palacio de Bellas Artes.

Nestled in the neighborhood of Condesa, Parque Mexico seems a world apart from the bustling center of Mexico City. The nine-hectare park, which dates back to 1927, abounds with winding pathways, ponds, and fountains. However, the park’s highlights are its numerous Art Deco buildings and intriguing structures, including an ironwork clock tower and the Foro, a pillared stage decorated with murals. The park is home to a huge variety of flora, such as palms, mimosas and Lebanese cypresses.

The shimmering facade of Museo Soumaya is unmissable and so is its collection. Designed by the renowned Mexican architect Fernando Romero, the $70-million building is tiled with 16,000 aluminum hexagons. The museum is home to an extensive 66,000-piece collection that includes

artworks by European Old Masters from the 15th to the 20th century, as well as more modern maestros such as Diego Rivera and Rufino Tamayo. The building’s first floor showcases the largest collection of pre-Hispanic and Colonial coins in the world.

Mexico is a predominantly Catholic country, so it’s not surprising that cathedrals play a large part in its landscape. The oldest cathedral in Latin America, Catedral Metropolitana was constructed in sections from 1573 to 1813. The imposing structure, which is an important part of the city’s historic center, combines three architectural styles, including Baroque, Neo-Classic, and Neo-Renaissance. It is said that most of the stones used to build the cathedral were taken from the ruins of Templo Mayor, which was built in 1325 and destroyed by the Spanish in 1521.