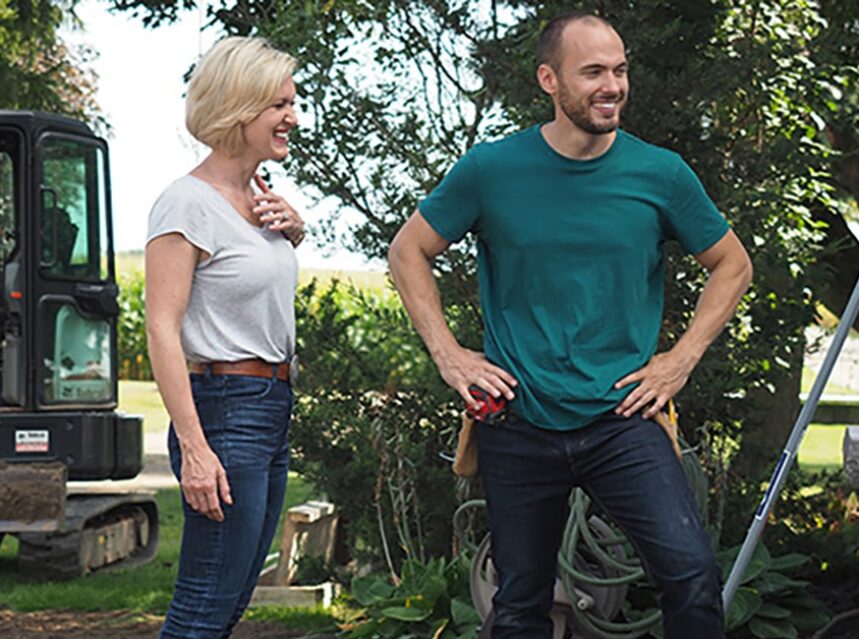 Farmhouse Facelift – There is so much more to a farmhouse than just the home of a farming family in the rural heart of the heartland. It can represent a region or country’s rural heritage, a place to retreat to from the everyday urban hustle and bustle, or the many generations of a single family whose main occupation was to work the land and provide for the people of their province or country.

The brother-and-sister team of Carolyn Wilbrink and Billy Pearson can understand about the lure of the farmer’s life and the farmhouse as a nucleus of that world. They both grew up on their family’s longtime farm in rural Ontario. Although they pursued non-agricultural careers (Carolyn is an interior designer and Billy is an experienced construction contractor), the spirit of their agrarian upbringing – as well as the values they learned about hard work and determination as a result – has never left them.

Using Carolyn’s mastery of interior design and Billy’s custom craftsmanship when it comes to home renovations, they teamed up to professionally renovate and modernize centuries-old farmhouses that are located within or near small towns in rural Ontario. And they have transcended their combined specialties on their 10-episode series “Farmhouse Facelift”, which aired on HGTV (its season finale aired on May 5) and focused on a different farmhouse renovation project each week, whether it be renovating a colonial-style farmhouse that has been the home of four generations of a farming family; making an outdated farmhouse functional once again; overhauling the main floor layout of a century-old farmhouse before a family of four moves in; or adding to a family’s dream farmhouse a main floor bathroom, extra storage space and doing major repairs on an old front porch that was quickly falling apart.

“The genesis of the show happened while we were in the midst of renovating our family’s 175-year-old farmhouse near Paris, Ontario, and regularly posted pictures of our progress with the project on Instagram. “Although we never advertised our renovation venture before – we just went from one job to the next – the farmhouse renovation was like a day on the farm. And I had photos on Instagram of my kids on the farm with my Dad, baling straw and just living life in the country,”said Carolyn during a recent phone interview. “Somehow, an L.A.-based production company called Sonar Entertainment contacted us and admitted that they were sort-of ‘stalking’ us on Instagram because whenever they put in ‘small town’ on the search engine, our photos always came up (also, it helped that our company was called ‘Small Town Style’). They told us they liked what we did and that our renovation projects couldn’t have been more perfect.”

The duo then went through an hour-long interview on Skype with the people from Sonar Productions. Although it went very well, Billy had his reservations about Sonar’s intentions. “I thought it was all a scam, especially when Sonar mentioned they had discovered another couple as well, and so I looked that couple up and found a blog by them, who described the same experience we had had … word for word,” he said. “That’s when I started to put up red flags and told Carolyn that they would probably take $1000 from us and then run off.”

About a year later, while the duo worked on more farmhouse renovations and posted more photos on Instagram (especially of Billy hard at work), they got a call from the person who would be their future executive producer and asked them to put together a “sizzle reel”, which is a 6-7 minute trailer that would explain what the program would be about for HGTV. “Then in March of 2019, we had a meeting at the Toronto headquarters of Corus Entertainment. When we arrived at the boardroom, the executives who were present told us ‘Welcome to the HGTV family’; that summer, we started taping our first episode,” said Billy.

They said that the renovation projects that became part of the “Farmhouse Facelift” series took about an average of 8-10 weeks to complete – some were as little as 7 weeks and another, because of the pandemic lockdown, — lasted 16 weeks, which were done on a very tight timeline. But they believe that doing renovation work on an assortment of old farmhouses was an honour for them, especially on structures that they believed were like a piece of history.

“It’s amazing how a farmhouse that has lasted for about 150 years can stand the test of time. It’s like bringing it back to what it was like, and you don’t want to lose that heritage,” said Billy. “Sometimes, during these renovations, we find ourselves having to fix old renovations hidden behind the walls. Maybe previous homeowners 80-100 years ago did some questionable structural changes that need to be addressed. You never know what you’ll find when you start opening things up.”

And those were not the only unusual objects they unearthed throughout those 10 projects. Carolyn revealed that they found in an old crawlspace the jawbone of a farm animal that belonged either to a horse or a cow. Billy recounted how they found a box of 40 old love letters – which three of them were read aloud on one broadcast – that were hidden deep inside a floor, which traced the evolution of the relationship of the couple in question. “It was a really beautiful story to have found hidden in a floor,” he added.

And while Carolyn and Billy are amazed with the overall positive response of the viewers to the show, who reside in Canada, the U.S. and Australia, they are eagerly awaiting the word from HGTV regarding a possible second season. But they credit the success of the series not only due to their skills and know-how when it comes to design and renovation, but also the personal touch they have with the couples and families whose houses they were renovating for the series.

“We still keep in touch with the homeowners and have created special bonds with them because of the fact that Billy and me were raised on a farm. We also have a special connection with generational farmers because like them, we know that farm life is all about family, history and workmanship. We know that they need to modernize their farms, but they never have the time to keep up the house because of their daily farm duties and obligations,” said Carolyn. “Before each project, we make sure to go and meet the families, and ask them how they live their life, how and what they use their home space for, and find out what their home needs in order to function properly. By doing that, these families can put their trust in us when we begin the task of giving their farmhouses that much needed facelift.”

When and where can I watch Farmhouse Facelift?

Past episodes of Farmhouse Facelift can also been seen on the new Global TV app via www.watch.globaltv.com and STACKTV. For more information about the show, go to www.hgtv.ca.