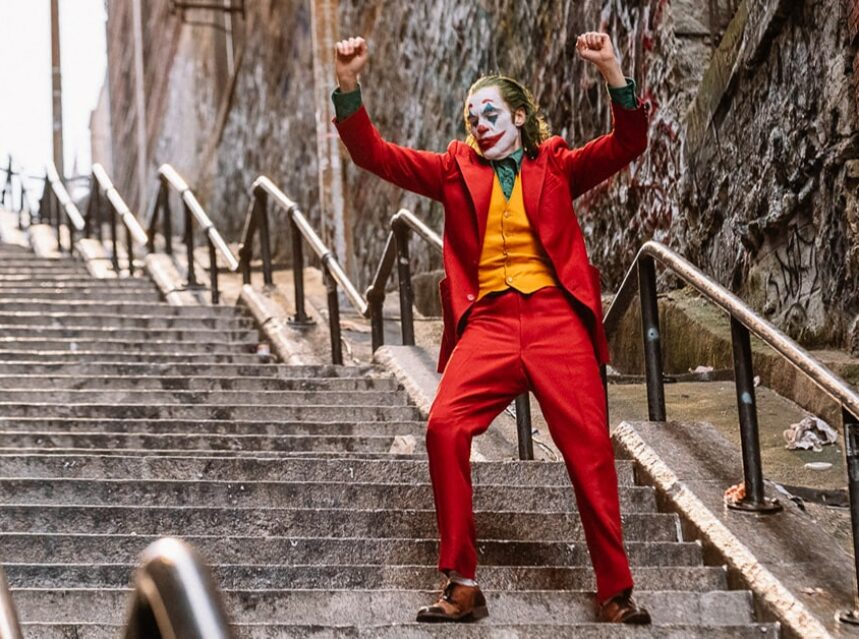 A film about one of Batman’s vilest enemies, at first sight, seems of limited scope: what can you add to what we already know? Well, indeed, plenty. Director Todd Phillips, who also co-wrote the script with Scott Silver, went very deeply and successfully reconstructing a character that had a lot of potential as an archetype of evil. But, a figure that also has a background and a psychological and social context, and in presenting those aspects, the film is simply brilliant.

The setting of the movie is very realistic in taking the audience to the 1970s, in Gotham, the fictional city inspired by Chicago, New Jersey, and New York. Arthur Fleck a.k.a. Joker (Joaquin Phoenix) works for a company that provides clowns to promote sales at stores or to organizations requiring cheap entertainment. Arthur is one of those sad clowns, in fact, we see him at the beginning of the movie involved in an incident that serves to introduce what is his pathetic life. The clown lives alone with his frail mother (Frances Conroy) in a rundown building in Gotham.  Watching a popular late-night show hosted by Murray Franklin (Robert de Niro) is one of Arthur’s few happy moments. He even likes to fantasize about appearing on the show. Indeed he fantasizes about many things, including a romantic encounter with his neighbour Sophie Dumont (Zazie Beetz), whom he follows on one occasion.

Arthur is taking medications, and we slowly learn about some of his conditions. At the same time, we are also introduced into the conflicted world of clowns: joy, sadness, and some mystery. In the case of Arthur, the secret about his own origins. On this, I don’t want to be a spoiler, but I can reveal that the father of Bruce Wayne –who we also see as a young boy– was far from being the nice guy that we were made to believe.  The senior Wayne is instead a cold capitalist with political aspirations to become Gotham mayor.

Eventually Arthur, now using his nickname “Joker,” makes it to Murray’s popular TV show.  However, things don’t go the way the TV producers would have expected. The film captures in a wonderful display of action and emotional shock the events that ensue (the cinematography by Lawrence Sher is one of the great assets of this movie).

“Joker” is a spectacular, well-written re-creation of one of the most iconic villains of popular culture.  Phoenix delivers a solid performance in the leading role, and the oppressing atmosphere of poverty, mental disorder, and social dysfunction are brought to the audience in a very credible manner.

Warning: the film contains many violent scenes, and some people may object to some stereotypical depictions of mental illness.

Nissia – Ready for the Spotlight