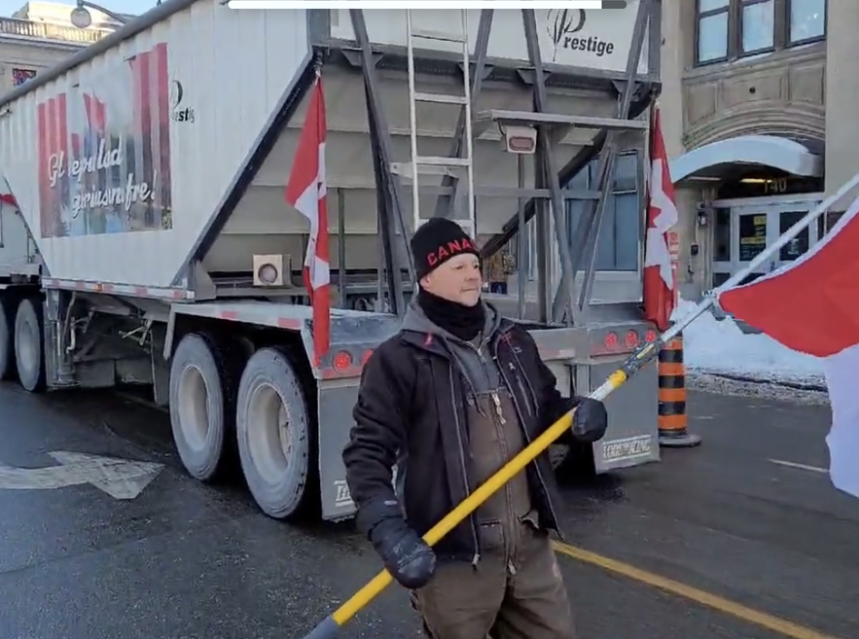 A massive rally took place on Parliament Hill this weekend against vaccine mandates for truck drivers crossing the Canada-US border. What began as a truckers’ convoy 4,500 kilometres away in British Columbia and joined in Ottawa by truckers from Eastern Canada to protest quarantines for unvaccinated truck drivers coming back into Canada from the U.S., morphed into something bigger. Several convoys of trucks, pick-ups and cars from all over Canada descended upon the capital region over the weekend with motorists honking their horns in support of vaccine choice for truck drivers.

“Freedom Convoy 2022”, as the trucker convoy became officially known, was organized by Tamara Lich, a board director of the Maverick Party based in Western Canada. Lich has raised more than $8 million to cover truckers’ costs for the trip although the funds have been temporarily frozen by GoFundMe until documentation can be provided as to how the money is being disbursed.

It is not known how many trucks and private vehicles converged in Ottawa on Saturday, but it was enough to create gridlock in the downtown core. Some businesses opted to close, but police reported no injuries or incidents of violence by the end of the first day of the protest. Thousands of demonstrators jammed the Parliamentary Precinct while adjacent sidewalks were filled with people who came to express their opposition to continuing public health restrictions nearly two years into the pandemic. Despite growing frustrations with lockdowns and mandates decreed by the provinces under emergency measures, the mood was upbeat and some people even danced and partied in the streets. Many were waving Canadian Maple Leaf flags while a number of Quebec Fleur de lys flags were spotted in the crowd.

People’s Party of Canada (PPC) leader Maxime Bernier, long an opponent of vaccine mandates and vaccine passports, joined the rally. When asked about his thoughts on why Prime Minister Justin Trudeau wouldn’t meet with truckers on the Hill he said, “I don’t understand why he’s not here.” The PM says he is isolating at home because one of his kids tested positive for COVID-19. He has also been very critical of so-called anti-vaxers. Recently, he drew flack for accusing anyone opposed to mandatory vaccination as having “fringe” and “unacceptable views.” Bernier’s take on things is quite different: “These people are not dangerous. They just want to regain their freedoms. There’s no logic, there’s no science for these draconian measures. We must end that. Look at what is happening around the world. In the UK they said, “Enough is enough.” There are no mandates, anymore, there. So, the virus is there, yes we understand that, but now we need to learn to live with that virus and not, in fear.”

While there have been concerns about outside agitators using the protest for their own reasons, it won’t serve the goals of the burgeoning freedom movement that is sweeping the country. George Roche, President of Canadian Rights Watch says, “We want to make sure that nobody engages in any violence.” Roche doesn’t want to see a situation unfold where the government would feel justified in bringing in even more restrictions to curb dissent. Canadian Rights Watch wants the federal government to enforce all Canadian and international human rights laws. “We’ve got to stay together and make sure there is no violence,” he says.

Bernier was also at pains to damp down any potential violence. He put a positive spin on things, declining to call the rally a protest. Instead, he chose to emphasize the fact that “peaceful assembly” is a right under the Canadian Charter of Rights and Freedoms. “That’s why we are here today, peacefully, not protesting, but enjoying our freedoms. We want that every single day of the year.”

Some people may go too far in expressing their freedom. A statue of Terry Fox on Parliament Hill was defaced when someone put a Canadian flag in its hand – upside down – and pasted a sign on it saying, “Mandate Freedom.”Both Mayor Brad West from Port Coquitlam, Terry Fox’s home town, and Ottawa Mayor Jim Watson expressed their disappointment in the behaviour of the few. “This is completely unacceptable and I have asked city bylaw to have the placard and upside down Canadian flag taken down,” tweeted Watson. “This kind of stunt by protesters does not help their cause.” While others entered Rideau Centre mall without wearing masks and adhering to provincial COVID restrictions.

Also, a video was widely circulated of at least one person climbing on the memorial Tomb of the Unknown Soldier, and National War Memorial.

This prompted outrage and condemnation from Canadian dignitaries including General Wayne Eyre and Minister of National Defence, Anita Anand.

Regardless of whether the goals of the protesters fall under federal or provincial jurisdiction, bringing the convoy to Parliament Hill has given them national exposure. En route the convoy has been cheered by thousands of people and raised millions of dollars in donations from ordinary folk. Many Canadians can empathize with the plight of unvaccinated truck drivers, especially those with medical conditions, even if they don’t fully agree with them. The online opt-in polls that purportedly show overwhelming support for severe sanctions against the unvaxed are notoriously unreliable and better constructed polls that rely on random sampling show more mixed results. Most people do want to get back to their jobs and lives and are looking for a workable solution to get us all out of the pandemic safely.

The truckers are not without high-profile support, either. Just on the cusp of the convoy rolling into Ottawa, Elon Musk, the Tesla boss tweeted: “Canadian truckers rule.” Well, that’s clever. “Canadian truckers.” It covers all the bases in the Canadian trucking industry without singling out any particular faction or group.

The freedom protest against COVID-19 restrictions is continuing into Sunday, with some vowing to stay in the nation’s capital until their demands are met.