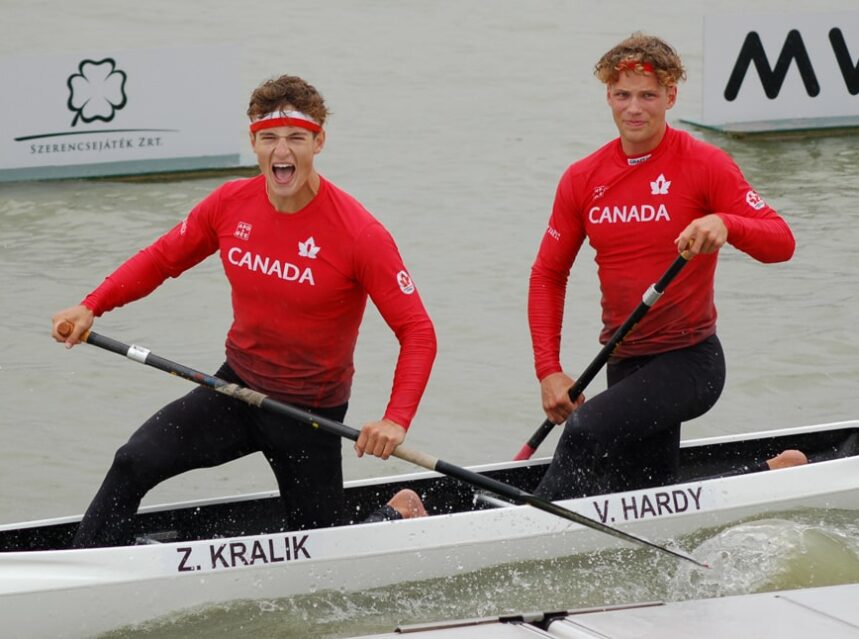 MISSISSAUGA, Sept. 8, 2022 – Mississauga’s Zach Kralik formed one-half of Canada’s men’s C-2 team, which claimed a silver medal in the 500-metre race, last Friday at the ICF Junior & U23 Canoe Sprint World Championships in Szeged, Hungary. He and Quebec’s Viktor Hardy recorded a time of 1:45:43 to finish only behind the host team, after placing fourth in the preliminary round.

“It was a huge shock, for sure. We went into it knowing we would need our absolute best race to get on the podium,” says Kralik, who trains in Port Credit with the Mississauga Canoe Club.

“We knew the Hungarians were really strong. It was super important for us to follow our own plan, (and make sure we had) a little left in the tank.”

Making it even sweeter, this marked the first time Canada had reached the podium in 31 years for men’s C-2 at the World Junior Championships.

“It was pretty surreal,” Kralik adds. “It was so awesome to have my parents (Dave And Francy) there. It was really a special moment.”

Kralik’s coach, Doug Tutty also from Mississauga says the pair were, “a solid second throughout”.

“It was very exciting to watch that race. We knew the guys were capable, and well-prepared,” Tutty comments.

“They’ve got a very smart approach to training.”

The two were also members of Canada’s Men’s C-4 500-m crew which placed an encouraging fourth in the world.

Kralik and Hardy first raced together at last year’s “Olympic Hopes” in Racice, Czech Republic, where they won gold in the C-2 200-metre race. While Hardy is based out of Club de Canoe Kayak de Lac Beauport, they trained together in March in Florida, and then in Quebec for another three weeks.

Kralik is out on the Credit River training diligently twice a day (except Sundays), in the gym, and also does some running.

He feels their finish in Szeged is, “definitely a really big step, especially because C-500 is the Olympic distance.”

“We have really good chemistry inside the boat, and are just really good friends off the water,” he says. “(We’re) pretty ambitious.” .

Coach Tutty agrees their medal was, “a very good sign”.

“It’s a very important step along the way,” he offers. “Young athletes in the Olympics are, typically, in their late 20’s. It takes eight to 10 years to develop. Hopefully, one day they can be on the Olympic team. This bodes well for Zach and Viktor, for sure.”

Meanwhile, Kralik’s older brother Hayden holds a pair of golds from nationals, in the kayaking event. Zach, 17, now heads to Dalhousie University, in Halifax, to study Engineering, before he and Hardy gear up for next year’s U-23 world championships in Italy.