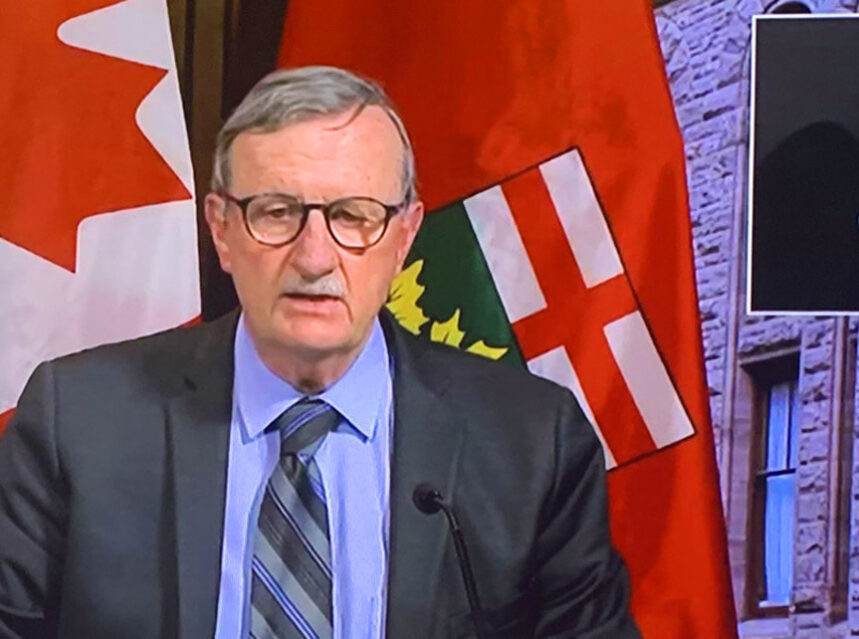 Province thanks Dr. David Williams for his Dedicated Service to Ontarians

TORONTO, ON., May 30, 2021 — On Monday, May 31, 2021, the Ontario government will table a motion in the Legislature to appoint Dr. Kieran Moore as the province’s next Chief Medical Officer of Health to succeed Dr. David Williams upon his retirement on June 25, 2021. Should the motion be passed, Dr. Moore would assume office effective June 26, 2021.

“Should this motion pass, Dr. Moore has agreed to take on this important role at a critical juncture in our fight against COVID-19. As we continue to vaccinate more Ontarians and embark on our Roadmap to Reopen in the coming weeks, Dr. Moore’s years of experience working in public health will be crucial as we begin to gradually lift public health measures,” said Christine Elliott, Deputy Premier and Minister of Health. “I would like to thank Dr. Williams for his dedication to safeguarding the health and safety of Ontarians during his many years of service. We are incredibly grateful for his experienced leadership at the helm of the province’s pandemic response to protect our communities from COVID-19 and its devastating impacts.”

To ensure a seamless transition into his new role, Dr. Moore will work alongside Dr. Williams for a few weeks, starting Monday, June 7, 2021.

Dr. Kieran Moore has served as the Medical Officer of Health for Kingston, Frontenac and Lennox & Addington Public Health since July 1, 2017. Dr. Moore has also had the distinction of serving in a variety of other roles, including as a Program Director for the Public Health and Preventive Medicine Residency Program at Queen’s University, as a Professor of emergency, family medicine and public health sciences, at Queen’s University, as an attending physician at Kingston General Hospital (KGH) and Hotel Dieu Hospital (HDH), and as a principal investigator at the Canadian Institutes of Health Research-funded Canadian Lyme Disease Research Network.

“Being considered for the role of Ontario’s Chief Medical Officer of Health is a great honour and one that I do not take lightly,” said Dr. Kieran Moore. “If appointed as the province’s next Chief Medical Officer of Health, I would remain steadfast in my commitment to fight COVID-19 and I would provide all necessary advice to the government to ensure the health and safety of all Ontarians.”

The Ontario government thanks Dr. Williams for his dedicated service to the province, including the last five years as Chief Medical Officer of Health, a position he has held since February 16, 2016. Dr. Williams has been at the forefront of Ontario’s pandemic response and his tireless work and measured advice have helped the government to keep Ontarians safe and informed. Dr. Williams had previously postponed his retirement to continue guiding the province through the pandemic and on November 23, 2020 was reappointed as Ontario’s Chief Medical Officer of Health from February 16 up until September 1, 2021.

Under Dr. Williams’ leadership, Ontario has achieved significant milestones in its fight against COVID-19 including:

Dr. Williams also played a key role at the Federal Provincial and Territorial level as a member of the Special Advisory Committee on COVID-19 and was a co-chair of the Ministry of Health’s Health Coordination Table.

During his tenure, Dr. Williams was also an ex-officio member on the Board at Public Health Ontario and served as a member of its Strategic Planning Committee. He also introduced Ontario’s Seniors Dental Program, led the provincial public health response through multiple challenges including preparing Ontario’s Zika readiness strategy with steps in place to manage any potential threats and acted as Ontario’s first ever Provincial Overdose Coordinator in 2018-19.

“It has been a pleasure and an honour to serve the people of Ontario as their Chief Medical Officer of Health”, said Dr. David Williams. “I have had the privilege to work with some of the most gifted and talented people over my career, and I want to thank them all for their contributions and dedication not only during this pandemic, but for all they have done for the health and well-being of Ontarians. I also want to thank the people of Ontario for the resilience they have displayed throughout this pandemic and for the support they have shown me in these challenging times.”