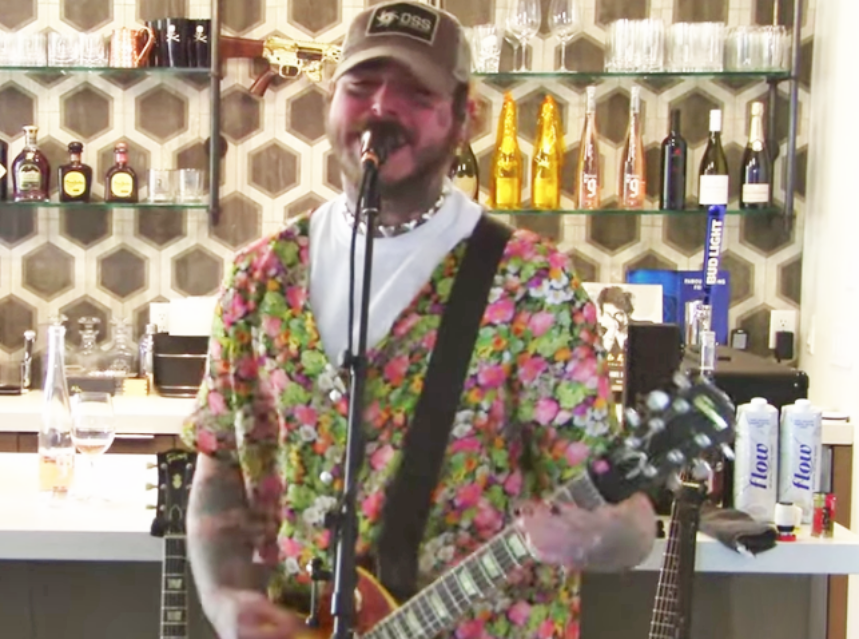 There seems to be no limit to what Post Malone is capable of pulling off. We all know he can sing and rap but now you can add ‘sing in a gravelly voice and play spot-on heavy grunge guitar’ to that his list of unsung talents. On Friday he live- streamed a physically distanced Nirvana tribute concert as lead singer and guitarist along with Blink-182 drummer, Travis Parker, bassist Brian Lee who has written and co-written several hits including Post Malone’s “Goodbyes,” while Post’s guitarist friend Nick Mack rounded out the lineup. The four ‘grunge rockers performed from different rooms in Post’s house in Salt Lake City, Utah.

The event raised money for The United Nations Foundation’s COVID-19 Solidarity Response Fund for The World Health Organization (WHO) in support of COVID-19 relief efforts. Google.org will be matching all donations at a 2:1 rate, up to $5M, with all proceeds going to the UN Foundation.

To date, the video has received over 7.7 million views and the event has raised over $4.3 million.

It takes a lot of chutzpah to tackle the iconic grunge kings’ repertoire but the band quite simply, rocked out and did Nirvana full justice as they performed a 15-song 80-minute set. They played so many fan favourites including “Come as You Are,” “Lithium,” “Heart-Shaped Box” and “About a Girl.” They also played the song, “Stay Away” which Post Malone said is coincidentally tattooed to his face (over his right eyebrow). And it was very Nirvana of them to deny fans of the band’s greatest hit, “Smells Like Teen Spirit.”

Oh yes, the one other notable thing about Post Malone’s performance was that the some of the band wore frumpy flowery frocks as a nod to Kurt Cobain’s (and Novaselic’s for that matter) thrift shop fashion sense that also included wearing pajama tops and shorts over long john’s on stage.

Check out the video here:

Posty starts off the show by saying “Thank you to the gentlemen who wrote these beautiful songs,” and then the band starts rocking out to “Francis Farmer Will Have Her Revenge on Seattle,” from the “In Utero” album.

Post Malone also hinted at a new album in the works as a follow-up to his hit album Hollywood’s Bleeding, released in late 2019.

And what did former Nirvana members think of the performance? Krist Novalesic tweeted out “Hello!!!!! I love you all!!!! I am holding emotions back the whole show. ” Former Nirvana drummer and lead singer of the Foo Fighters, Dave Grohl has yet to comment.

Here is the full setlist from the livestream concert:

Francis Farmer Will Have Her Revenge on Seattle

Come As You Are

Something In The Way