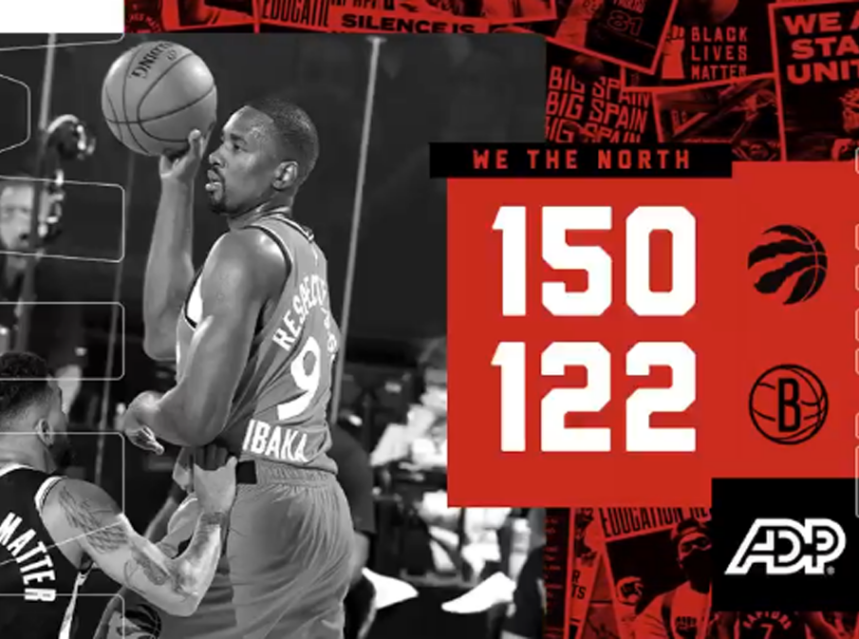 TORONTO, ON., Aug. 24, 2020 — It’s been an incredible few days for the Toronto Raptors as the defending champs bounced the Brooklyn Nets in four games, marking the first-ever playoff sweep in franchise history.

Despite losing Kyle Lowry early in the first to an ankle injury, the Raps powered through, led by Serge Ibaka and Pascal Siakam, to a dominating 150-122 victory.

The Raptors bench scored an NBA-record 100 points. Toronto’s 150 points is also a franchise record for a playoff game.

Now, the Raptors turn their attention to the Boston Celtics with Game 1 of the Eastern Conference Semifinals going down Thursday night in Walt Disney World.

It will mark the first time that Toronto and Boston have ever faced each other in the NBA playoffs. The Celtics had the edge in the season series taking 3 of 4 games from the Raptors.

On Monday, the team announced that Lowry has a left ankle sprain and he’s currently day-to-day, meaning we don’t know if he’ll be in the lineup to start the series against Boston.

Hail to the chief

If all that winning and record smashing wasn’t enough, also on the weekend, Toronto bench boss Nick Nurse was named NBA Coach of the Year.

During the 2019-20 season, he led the Raptors to the second best record in the NBA (53-19), including an incredible hot streak of 15 straight victories which is the longest winning streak for any Canadian team in pro sports history.

Nurse is the third coach in franchise history to win the award, joining Dwane Casey and Sam Mitchell.

It should be noted that last year, Nurse became just the 9th ever rookie coach in NBA history to win a championship.