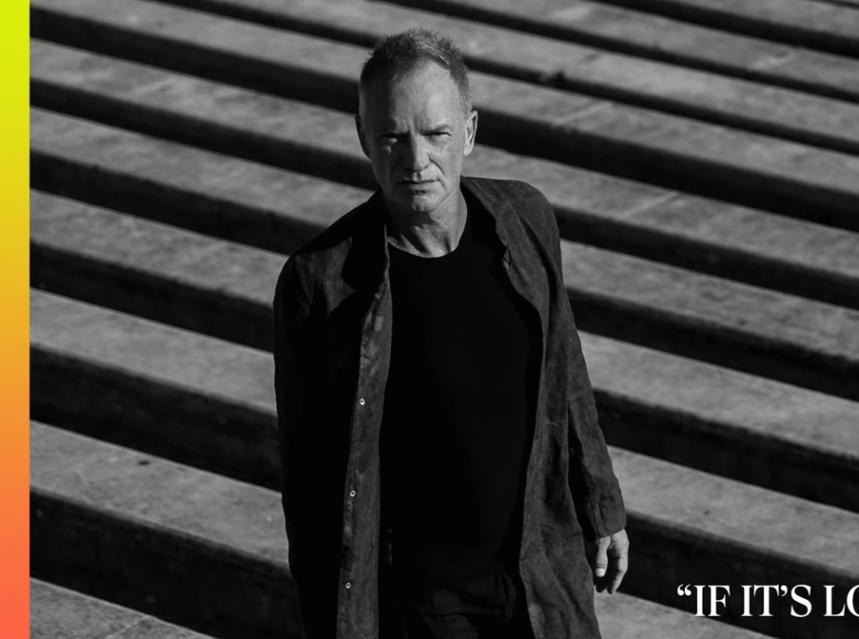 Today, 17-time Grammy Award winning musician Sting has announced The Bridge, a brand-new album will be released on November 19 (Just in time for Christmas) via A&M/Interscope/Cherrytree Records and available for pre-order here (full track listing included below), but along with the announcement he just premiered the first single on BBC Radio 2, “If It’s Love” and it is out now.

Sting’s new single “If It’s Love” is a short super catchy, fun and optimistic pop song reminiscent of his huge hit “All This Time” off Soul Cages, and it will have you smiling from the very first whistle intro.

Sting’s press team describes the song as an upbeat, breezy and infectious pop tune that “exhibits his undeniable gift for melody. In his signature voice, and taking a different approach to a straight-forward love song, Sting likens contemplating his romantic feelings to calling the doctor about his symptoms.”

It’s a fun playful and contagious song treating love as an illness that the doctor will not be able to cure.

The Bridge showcases a new set of songs representing styles and genres explored throughout his unrivalled career.

“I’m certainly not the first songwriter to equate falling in or out of love with an incurable sickness, nor will I be the last,” says Sting. “’If It’s Love’ is my addition to that canon where the tropes of metaphorical symptoms, diagnosis, and downright incapacity are all familiar enough to make each of us smile ruefully.”

The Bridge was written in a year of global pandemic and finds Sting ruminating on personal loss, separation, disruption, lockdown, and extraordinary social and political turmoil.

Exploring a multitude of concepts and themes, Sting’s press release says a “bridge” “represents the enduring and ever-evolving link between ideas, cultures, continents, and even the banks of a river. It’s also a route into the past, and so it was that Sting found himself considering the music and the places that have formed his own foundations, and that indeed are embedded in his very DNA.”

Representing various stages and styles from throughout his career and drawing inspiration from genres including rock n’ roll, jazz, classical music and folk, the eclectic album features Sting’s quintessential sound on pop-rock tracks such as the album’s opening rock salvo “Rushing Water” and new indie-pop sounding “If It’s Love,” to the smouldering electronic ballad “Loving You” and the romantic “For Her Love” which evokes Sting’s trademark “Fields of Gold” period. “The Book of Numbers,” “Harmony Road” and “The Bells of St. Thomas” showcase Sting’s collaboration with his long-time guitarist/“right and left-hand,” Dominic Miller.

According to sting.com The Bridge will be released in multiple formats, including standard and deluxe CD and vinyl, Japanese Exclusive standard and deluxe albums, all digital streaming and download platforms, as well as a music cassette. The deluxe CD and vinyl will include bonus tracks “Waters of Tyne,” “Captain Bateman’s Basement,” and “(Sittin’ on) The Dock of the Bay.” Both Japanese exclusives will be on SHM-CD including the additional bonus track “I Guess the Lord Must Be in New York City,” while the deluxe version will also include a DVD with an interview and track by track discussion with Sting, as well as music videos for “If It’s Love” and “Rushing Water.”

Later this month, Sting is returning to the live arena with a performance in Sicily on September 27  followed by concerts at the historic Odeon of Herodes Atticus in Athens on September 30 and October 1. Soon after, he will launch My Songs: The Las Vegas Residency beginning October 29 at the The Colosseum at Caesars Palace featuring a compendium of his most beloved songs with dynamic, visual references to some of his most iconic videos and inspirations.

by Terence Lankstead with extensive notes from Sting.com