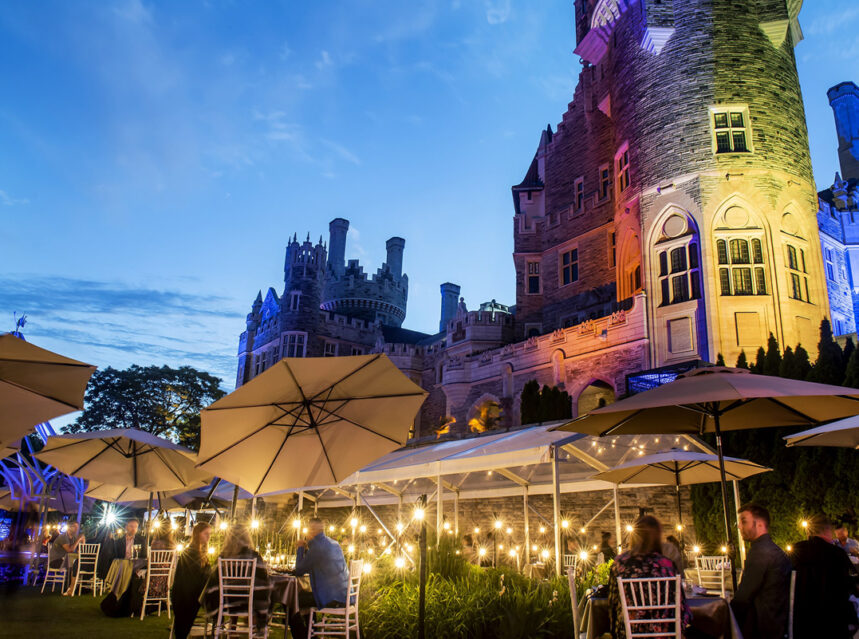 Liberty Entertainment Group announces the official summer season opening of Casa Loma’s award-winning Gardens, with the ceremonial lighting of a beacon to celebrate The Queen’s Platinum Jubilee on June 2nd, 2022

TORONTO, May 16. 2022 – Liberty Entertainment Group will kick off the official opening of the summer season at one of the city’s most treasured and internationally award-winning Gardens. There will be a ceremonial lighting of a beacon to celebrate The Queen’s Platinum Jubilee on June 2nd, 2022. The beacon lighting commemorating Her Majesty’s 70th year as the Monarch and Head of the Commonwealth, is being held in partnership with the Rotary Club of Toronto, The Honorable Company of Freemen of the City of London of North America, and St. John Ambulance.

Featuring dining in the Gardens beginning at 5:00 PM, the ceremony begins at 8:30 PM with an official visit from Her Honour, the Honourable Lieutenant Governor of Ontario, Elizabeth Dowdeswell, official speaking remarks by dignitaries, and live entertainment including a bugler from The Queen’s Own Rifles of Canada, a piper from St John Ambulance, a musical performance by the NYT Hearts of Fire choir, followed by the formal Beacon lighting at 9:15 PM. Reservations are available online at www.casaloma.ca.

“We are honoured to open the season in honour of The Queen’s significant milestone in history and what a fitting opportunity to be able to host our guests to celebrate in a castle, one of our city’s most popular destinations,” said Nick Di Donato, president and CEO, Liberty Group. “We will be one of more than 1,500 beacons lit through the UK and in capital cities of the Commonwealth in recognition of Her Majesty’s service. It will indeed be a milestone event in Casa Loma’s long history in Toronto.”

Opening for outdoor dinner service as of June 2nd, the Gardens’ new menu is globally inspired, offering seasonal fare ranging from starters and salads ($15 – $25) to grilled entrees ($26 – $48), while the Castle’s renowned underground wine cellar boasts the best of both new and old worlds, to perfectly pair. Guests may enjoy unparalleled views of the city with the backdrop of the grand castle and its award-winning landscaping. Gardens’ reservations are now open at 416-523-0450 or visit www.casaloma.ca for more information.

Symphony in the Gardens returns

Following the unprecedented success of the Candlelight Symphony in the Stables program, Casa Loma is pleased to welcome Maestro Paolo Bustano and the beloved Casa Loma Symphony Orchestra and special guest performers to the Glass Pavilion in the Gardens for weekly performances on Mondays, beginning June 6th. Ticketed seating is $30 pp; tickets go on sale May 18th at www.casaloma.ca. The weekly program line-up is as follows: June 6th is Sinatra and Friends, June 13th is Classical, June 20th is ABBA Mania, June 27th is Movie Night, July 4th is Broadway Musicals, July 11th is Psychedelic Monday, July 18th is The Virtuosi, July 25th is Piaf, August 1st is Big Band, August 8th is Nightingales, August 15th is From Disco to Queen, August 22nd is Movie Night, August 29th is The Virtuosi, September 5th is Disney/Dreamworks Night. Full program details and tickets at www.casaloma.ca

Having made its stunning gala premiered in Canada last month at Casa Loma after recently being on tour in LA and Chicago – Princess Diana: Accredited Access tells the story of the world’s most beloved Princess through an intimate lens, taking guests on an experiential walk-through documentary of photography narrated by Diana’s Royal Photographer. Anwar Hussein and his sons Samir and Zak share their original images and the personal, exclusive and never-before-told stories of them. The exhibit continues amidst the royal splendour of the castle until June 12th; limited tickets are still available at www.casaloma.ca

“Our treasured heritage landmark continues to attract visitors to enjoy its unique architecture, celebrated history and connection to the Royal Family, its entertainment events and installations, fine dining destinations, and incomparable outdoor spaces,” continued Mr. Di Donato. “We’re excited to offer the city an unparalleled and rich calendar of hospitality experiences for all ages this summer season, and welcome guests and visitors to celebrate with us.”

For more than three decades, the Liberty Entertainment Group, led by Nick Di Donato, has been redefining Toronto’s restaurant, nightlife, and special event experience. As developers and operators of numerous landmark establishments, they have become recognized as one of the most successful and innovative companies in the industry.