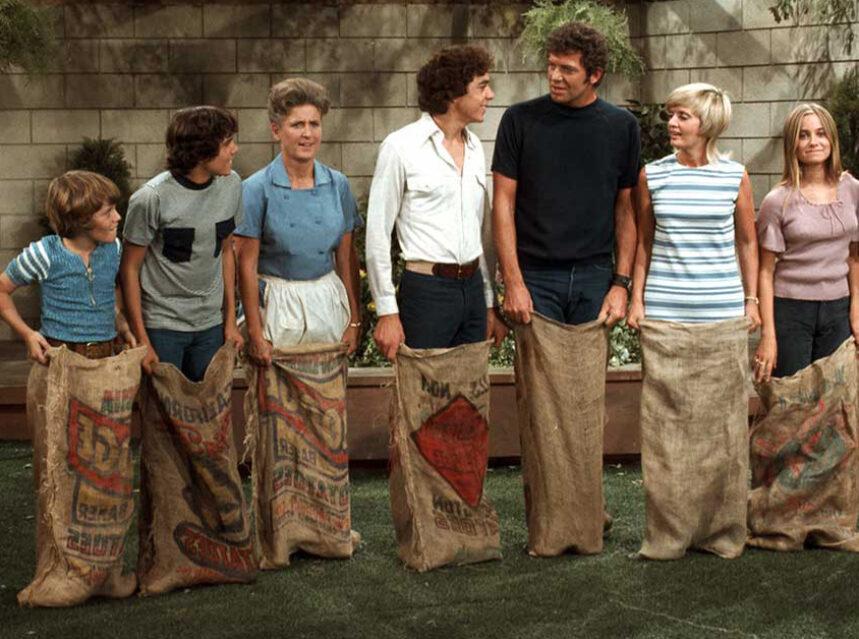 The Brady Bunch – During the early 1970s, my Friday night TV viewing habits were fixed on one network and one network only: ABC. From 8 to 11 p.m., I would sit in front of my family’s Zenith colour TV set to catch this line-up (in order of appearance): The Brady Bunch, The Partridge Family, Room 222, The Odd Couple and Love, American Style. What I liked about that Friday night line-up was that the shows were cool, funny and catered to my age group, especially the first two shows.

It’s been over 50 years since The Brady Bunch first went on the air; and since its last original episode was broadcast back in 1974, the exploits of the lovely lady, the man named Brady, their six kids and a wise-cracking housekeeper named Alice has never left the conscience of the Baby Boomers who made Friday nights at 8 during those five seasons a very Brady viewing experience.

How can you forget “Marcia, Marcia, Marcia!”, Peter breaking mom’s favourite vase with a basketball, Sam the butcher, Marcia’s football nose, “The Silver Platters”, those trips to the Grand Canyon and Hawaii, Cindy’s Kitty Carry-All doll, and Peter’s faux Humphrey Bogart impersonation, as he says “Pork chops and applesauce”? All of these Brady moments are engraved in the collective consciences of the show’s original Baby Boomer viewers, not to mention the countless generations of viewers since then thanks to reruns, spinoffs and spoofs.

Entertainment reporter Kimberly Potts is aware of The Brady Bunch’s lasting contribution to pop culture over the past 50 years, and she pays tribute to the Bradys’ road from Friday night sitcom to pop culture icon in her fascinating book The Way We All Became the Brady Bunch.

Behind the scenes on the Brady Bunch set

Using a great deal of research and interviews, Potts gives the reader quite an absorbing backstage history of the Brady Bunch, from the conception (creator Sherwood Schwartz wanted to give the TV sitcom nuclear family of the 50s and 60s a new twist, as well as have the situations seen from the kids’ point of view), to the casting (Gene Hackman was Schwartz’s first choice to portray Mike Brady, and Jeffrey Hunter – best known for his role of Captain Pike in the first “Star Trek” pilot – was rejected because he looked “too perfect” for the role), to what went on behind the scenes at the Paramount lot (The Brady kids were encouraged to wander around the lot between filming of scenes, which ranged from racing their bikes around the studio to visiting the sets of other TV series that were being shot at Paramount).

As well, you get treated to many interesting Brady facts that are being revealed for the first time, such as the entire cast taking up needlepoint between scenes – which was Ann B. Davis’ favorite hobby – and becoming quite adept at it; and because there was a long-running creative feud between Robert Reed and Sherwood Schwartz over the lack of realism in some of the show’s scripts, Schwartz was ready to fire Reed and replace him with actor – and look-alike – Robert Foxworth in the role if the show would have been renewed for a sixth season. And Potter even landed an interview with actress – and substitute Jan – Geri Reischl on her experiences working on the short-lived “Brady Bunch Variety Hour” in 1976-77 (in which she admitted she enjoyed the entire experience).

However, the story of the Brady Bunch doesn’t end there. Potts chronicles how the show became an enduring pop culture phenomenon that has lasted beyond its original five-year run on ABC. This includes the surprise popularity of the touring off-Broadway show “The Real Live Brady Bunch” (which included future “Glee” star Jane Lynch as part of its original cast); Barry Williams’ 1992 memoir “Growing Up Brady” shooting up the New York Times best seller list; countless mentions and references on other TV shows, movies and commercials such as “Family Guy”, “Bridesmaids” “The Simpsons” and “The Big Bang Theory”; to even a series of x-rated spoof videos called “Not the Bradys XXX”. And when the Los Angeles area home located at 11222 Dilling Street – which served as the exterior of the Brady residence – was up for sale in 2018, it launched a fierce bidding war until HGTV bought the property, which served as the basis of an interesting concept for a reunion/home renovation home, in which all of the original Brady kids cast got together to refurbish the home to resemble the actual interior of the Brady home circa 1972, that aired on HGTV as “A Very Brady Renovation”.

The Way We All Became the Brady Bunch is a complete history of a family TV sitcom with a twist – which was universally panned and garnered middling ratings during its original run – and somehow became a TV icon because the premise of two widowed people and their respective kids who came together by marriage and became the ideal image of the kind of nuclear family that we all hoped to aspire to, and how its popularity with viewers still endures 50 years later.

Me by Elton John