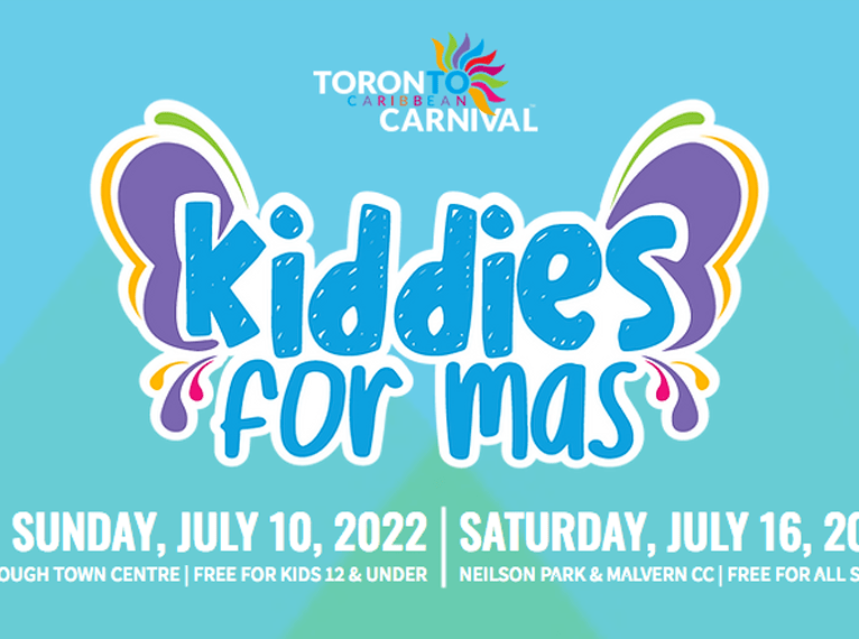 TORONTO, July 5, 2022 – In celebration of the 55th Anniversary of the parade, the Toronto Caribbean Carnival is excited to announce “Kiddies for Mas” carnival. A separate festival with two events taking place in Scarborough:

Celebrating the 55th anniversary of the Grande Parade which was first gifted to Canada by the Caribbean Community during Canada’s centennial celebrations, the Toronto Caribbean Carnival is a spectacular display of costumes, music, and culture.

Jr. King & Queen Showcase is a day of entertainment for the kids and families with live music, food & drink featuring the youths’ showcase of their colourful Caribbean King & Queen costumes. Come support the Future of de Carnival, July 10, 2022, at Scarborough Town Centre.

GET YOUR TICKETS NOW!

Jr. Carnival Parade will be held on Saturday, July 16, 2022. Starting at Malvern Community Centre, Jr. Masqueraders will march in colourful Caribbean costumes along west on McLevin Ave. & north on Neilson Rd. towards the Jr. Carnival Central at Neilson Park. This event is free to all Spectators in support of de Future of de Carnival and its Jr. Masqueraders.

FREE FOR ALL SPECTATORS!

This Caribbean tradition of parading through the street was founded in celebration of freedom and emancipation from slavery and is appropriately celebrated on what has been recognized by the Canadian government as Emancipation Day weekend.