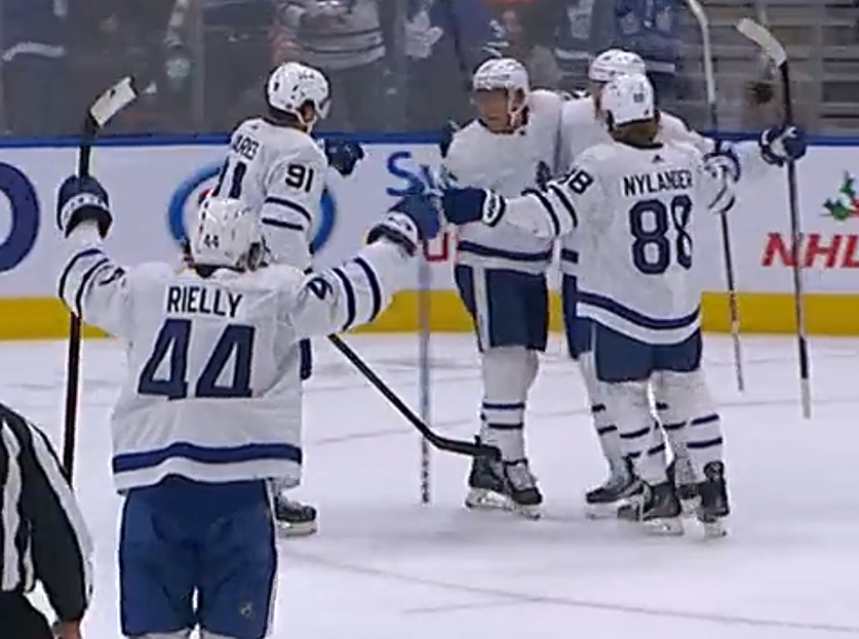 The game between the Toronto Maple Leafs and Vancouver Canucks at Rogers Arena in Vancouver on Saturday has been postponed by the NHL due to COVID-19 concerns.

Toronto’s game at the Seattle Kraken on Sunday and Vancouver’s game against the Arizona Coyotes on Sunday have also been postponed.

The games have yet to be rescheduled.

After Seattle, Toronto is next scheduled to host the St. Louis Blues on Thursday. But there really is a growing feeling that the NHL could suspend all games until after the Christmas break.

Meanwhile as for the Canucks, they have five players in protocol: defensemen Tyler Myers, Luke Schenn, Tucker Poolman and Brad Hunt, and forward Juho Lammikko. Vancouver is next scheduled to play at the San Jose Sharks on Tuesday.

The announcements about the Leafs’ game postponements come just one day after Ontario lowered capacities at sporting venues, which will certainly create certain challenges for the Maple Leafs ticketing team.

The NHL has announced Saturday that the Boston Bruins (with at least 7 players out) now, along with Nashville Predators would be shut down through the NHL holiday break because of COVID-19 concerns. While, the Calgary Flames, Colorado Avalanche and Florida Panthers each had their games postponed through the holiday break Friday.

The Flames, who have 19 players, three coaches and nine support staff in protocol, have had six games postponed, the Avalanche and Bruins four, and the Predators and Panthers three. The Maple Leafs-Flames game scheduled for Thursday was among those previously postponed.

The NHL has now postponed 29 games in total out of COVID-19 concerns.

The NHL had 55 games postponed last season; each was made up as part of a 56-game schedule.

The NHL said that the decision to postpone these games was made by medical groups with the teams, the league and the NHL Players’ Association.

“We can practice if we want,” said Canucks’ GM Jim Rutherford. “I don’t know what (coach) Bruce (Boudreau) will decide there but we can have fairly normal activities except play the games. I would like to see us play a full season and figure out a way to do that, but for me, safety comes first.”

Regarding the games being called off, Rutherford tol NHL.com “I wasn’t totally surprised. I was a little bit disappointed….” “From a team point of view, this was going to be a really good test for us. Every game is a test but the Maple Leafs are one of the top teams in the League and we would have got a good look at how our team responded against them, so we’re disappointed but safety comes first, the safety of the players, the safety of the fans and I think this is the right decision,” said Rutherford.

The NHL and NHLPA also has announced that enhanced meaures are being put into place to help combat the spread of COVID amid the emergence of the Omicron variant. The new protocols include increased use of masks in team facilities and while travelling, daily testing, physical distancing and prohibitions on players dining out while on the road.

In light of these recent announcements, rumours are also swirling that the league might be shut down until after the Christmas break, and with so many games lost it could spell certain doom for NHL players going to the Olympics, but this all remains to be seen.