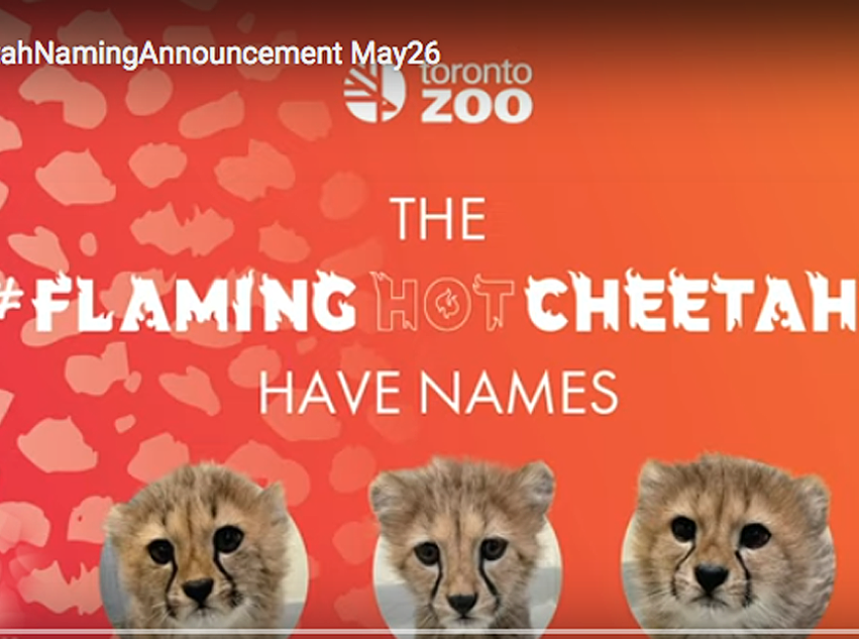 TORONTO, May 27, 2022 – The Toronto Zoo just excitedly revealed the names of their #FlamingHotCheetahs! Zoo officials say that with almost 10,000 votes cast, it was a relatively close race, but the winning group was Toulouse, Berlioz and Marie – named after the kittens in Disney’s Aristocats animated film! Toronto Zoo sends out a big thank you to everyone who participated! “We love including the community in special moments at your Toronto Zoo.”

The cheetah cubs were born January 24, 2022 to first-time mom Emarah, a 4.5 year old cheetah. Now four-months-old, they currently weigh 9.9kg, 8.8kg, and 7.9kg and continue to get stronger and more adventurous each day. They have received their vaccines, and their outdoor habitat has been thoroughly baby-proofed by our Wildlife Care staff to ensure their adventurous nature is safe as they begin to explore their outdoor space. Wondering when you will be able to see these fluffy cubs in person? Should be VERY soon! Follow the zoos on social media for updates about when they will be viewable in their outdoor habitat!

Mother, Emarah, was part of the last cheetah litter born at the Toronto Zoo in April, 2017. Her brothers and sister have moved to other accredited zoos as part of the Species Survival Plan (SSP) Program coordinated by the Association of Zoos and Aquariums (AZA). Emarah and her cubs are important contributors to the Cheetah SSP as their genes are not widespread in cheetah populations in accredited Zoos. The SSP makes recommendations to best manage the cheetahs in human care, and Berlioz, Marie and Toulouse will also now contribute to supporting the preservation and protection of cheetahs for future generations.