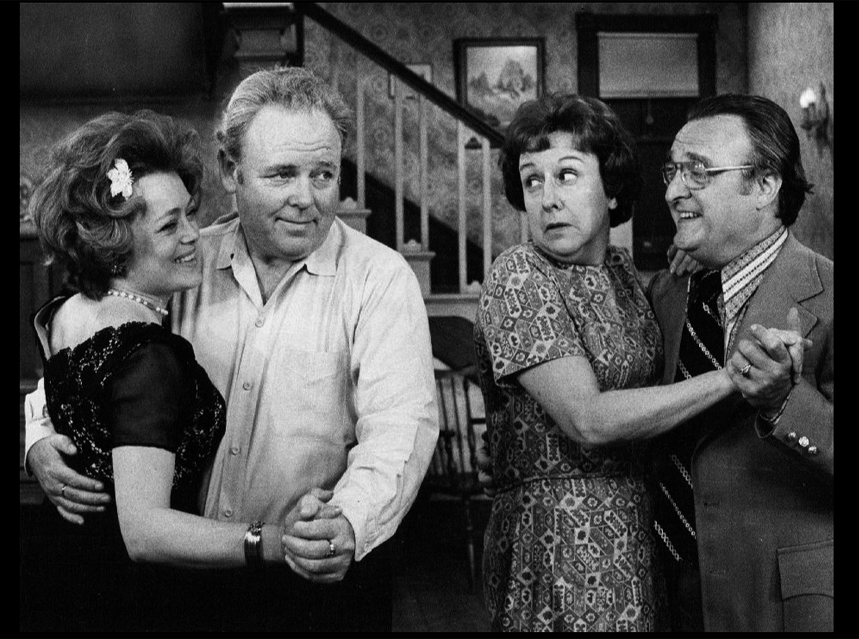 This year marks the 50th anniversary of the debut of “All in the Family” on CBS, the show in which the sitcom genre finally grew up and never looked back.

From 1971-79, “All in the Family”, through the premise of the Bunker family that resided at 704 Hauser Street in the New York borough of Queens, tackled the most controversial topics and issues of the day that would make other TV shows at the time blush bright red, in an unabashed, blunt and pointed way. Some of these controversial subjects included race relations, feminism, religion, homosexuality, war, guns, and social inequity. All of these topics are just as prevalent hot buttons if not more, today.

And for nine seasons, the weekly happenings of Archie, Edith, Gloria and Mike touched a nerve in millions of viewers, and the TV sitcom was changed forever, in which they got the green light to be more realistic without having to sugar coat topics anymore.

The creative force behind All in the Family (as well as its direct and indirect spinoffs such as Maude, Good Times and The Jeffersons) was veteran TV writer and director Norman Lear. In fact, thanks to the immediate success of his reality-based shows, Lear became a virtual one-man TV empire throughout the 70s. However, All in the Family will always remain his cornerstone. And to mark the show’s golden anniversary, Lear takes a fond look back at the show and its overall impact with a wonderful coffee table book called All in the Family: The Show That Changed Television.

The book is like a combination oral history, appreciation, photo album, episode guide and scrapbook. From its humble origins, to the three pilots, to the spinoffs, and the episode reboots, the reader is offered a complete history of the show and what made it so special.

First of all, the episode guide is not like what you would typically find in a book dealing with the history of a certain TV show. Although the book lists every episode with the original airdate, episode title, writer and director (and any Emmy Awards that were won that season), Lear has decided to give a more detailed look to those All in the Family episodes that were quite impactful with the viewers or the subject matter that they targetted. They include introductory remarks from Lear, as well as some behind-the-scenes reflections by certain members of the cast and crew, plus photos and edited and marked-up pages from some of the original scripts. Milestone episodes featured in the book include the third pilot “Meet the Bunkers”, “Edith’s Accident”, “Archie Gets Branded”, “Sammy’s Visit”, “Mike and Gloria’s Wedding”, “Edith’s Crisis of Faith”, “The Stivics Go West” and one of my favourites, the Christmas 1976 episode “The Draft Dodger” (in which the only complaint from CBS regarding that powerful half-hour was that Archie said “god damn”).

The book also pays tribute to some of the show’s aesthetics. You get the inside story on the choice of costumes that were for each of the characters, through commentary by costume designer Rita Riggs (including rare Polaroid costume test shots), in which there are plenty of interesting tidbits. For example, throughout the show’s run, Carroll O’Connor wore seven white shirts, five fedoras and one pair of pants (that were constantly mended and let out) as Archie Bunker; the story behind every set created  (the furniture and wallpaper used for the Bunker residence were all purchased at store bargain bins), and even the process of how an episode script was developed week after week.

So for anyone who made All in the Family a regular viewing habit throughout the 70s, whether you were a dingbat, meathead, liked the atmosphere at Kelsey’s Bar, enjoyed the musings of “Edith the Good”, witnessed another face-to-face confrontation between Archie and Mike over another hot button issue, or sang along with Archie and Edith to “Those Were the Days”, this All in the Family tribute book is a golden salute to the rebel series that could – and did – mature the TV sitcom and changed the way we watched and understood television in North America.

Lead photo Rue McClanahan and Vincent Gardenia as Ruth and Curtis Rempley with Carroll O’Connor and Jean Stapleton as Archie and Edith Bunker. When Edith invites a nice new couple she met to come to the Bunkers for the evening, after switching dancing partners, the talk quickly turns to other types of switching.