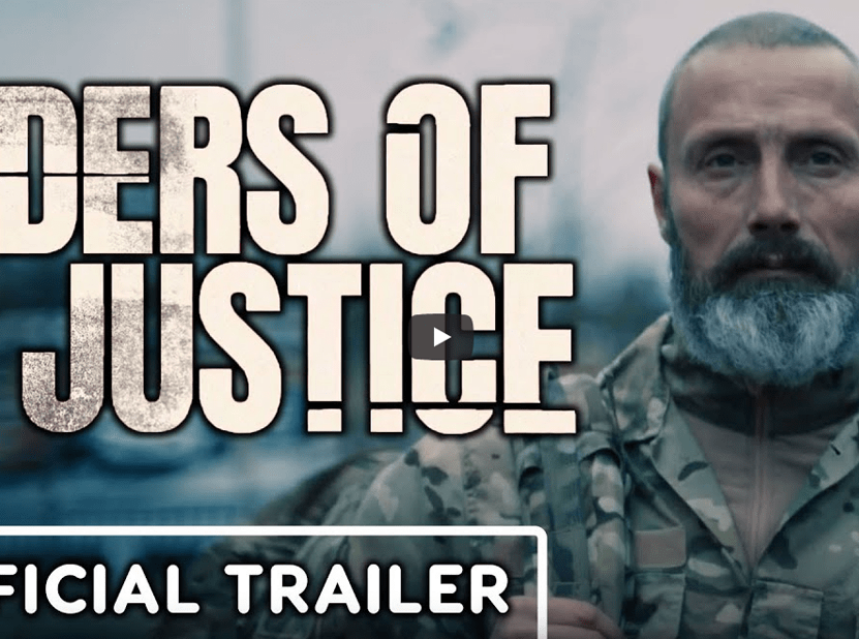 “I strongly recommend it to all those who enjoy good cinema.” -Sergio Martinez

Riders of Justice – Danish director Anders Thomas Jensen, presents this very clever black comedy where he plays with the succession of events interpreted from logarithmic sequences.

“Numbers don’t lie”, says Otto (Nikolaj Lie Kaas), who we see making a presentation to a group of businesspeople. Accompanied by his colleague Lennart (Lars Brygmann), Otto tries to explain to his audience how, through logarithmic functions, we can arrive at what he considers very significant revelations. The problem is that the conclusions that Otto and Lennart bring to their audience are rather obvious—no need for complex statistical analyses to arrive at the results.

At the same time, with Christmas approaching, we see that Mathilde (Andrea Heick Gadeberg) wants a bicycle as a present. She would prefer one blue and not red, a significant event in the development of the story. Her father, Markus (Mads Mikkelsen), a soldier, is coming home for the season. Still, he has had to delay his arrival. This leads Mathilde’s mother to take a day off to go to the city with Mathilde. The two park at the station and take the train. That will be the same train Otto has taken, and the same car too. Seen that the woman is carrying a few things, and as a polite gentleman, Otto cedes his seat to the lady. Moments later, the train is involved in a collision, and as a result, many people die, among them Mathilde’s mother.

Otto, a rigorous thinker, then starts to elaborate on the event and concludes that this was not an accident but a deliberate event. He is now involving his friend and colleague Lennart to get into this matter. There is something suspicious about the train crash, especially when among the victims, is listed a man who was to testify in a trial against a powerful crime boss. Otto and Lennart now get the assistance of their friend and computer ace Emmenthaler (Nicolas Bro). The three of them visit Markus, still mourning the death of his wife and coping with a tense relationship with his daughter Mathilde.

The four would now team up to fight the dangerous gang, each time with a greater conviction that everything has some kind of connection. There are no coincidences, so they think.

“Riders of Justice” is a great movie that oscillates between moments of drama and comedy. It leaves an exquisite sensation in the audience of being part of an engaging story and giving them something to think about. It is a film that captures the spectator’s attention, sharing the sometimes comic and absurd events combined with the drama of loss, as lived by Markus and Mathilde.

I strongly recommend it to all those who enjoy good cinema. Also, to admirers of Danish movies, especially those who may think that life and its mysteries can all be resolved using suitable algorithms.

In Danish with English subtitles. To be released in cinemas on Friday May 21, 2021. Duration: 116 min