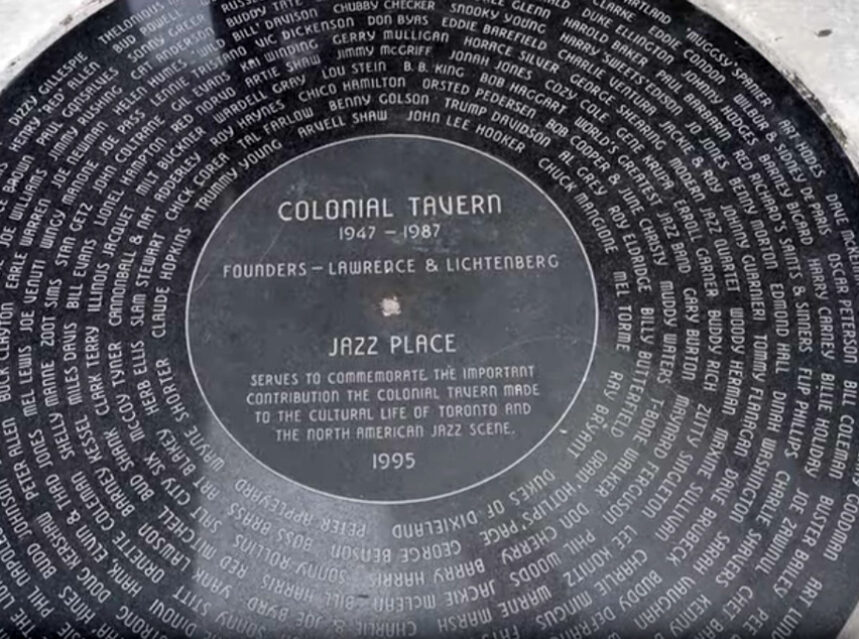 Today, in collaboration with MOD Developments, Downtown Yonge BIA unveiled the Colonial Tavern disc, returned back to its original site at 203 Yonge Street. The sidewalk disc commemorates the incredible number of music greats that performed at one of Canada’s most famous jazz clubs from the 1950s to the late 1970s.

The Colonial Tavern was owned and managed by brothers-in-law Mike (Myer) G. Lawrence, Goodwin (Goody) and Harvey Lichtenberg. It was the advent of the Eaton Centre development and Adult Entertainment establishments that posed financial challenges for the Colonial, with the final straw coming when the club owners were ordered by the City to install a $70,000 sprinkler system to bring it up to code.

There are actually 150 names carved into the disc that used to be located in the parkette where the Colonial once stood. The disc had been removed during redevelopment of the Massey Tower complex and was recently relocated in a works yard out in Scarborough.

Mark Garner, COO and ED of Downtown Yonge BIA says “it’s our role to tell the music legacy of Yonge Street to the community.” I think with the disc now being back in its proud location where the Colonial used to be is an iconic moment and preserving Toronto’s music history,” said Garner.

“I think with the disc now there…I’m expecting to see positive music sector interest and tourism interest around this disc being there,” said Garner.

“The great thing is there is still live music to be found on Yonge Street,” said Nicholas Jennings, local journalist and music historian. “There are clubs like Top O’ The Senator and Jazz Bistro, and then there’s music being featured in the parks around Yonge Street. There’s concerts being put on in Yonge-Dundas Square, so there is still – thank goodness – live music in the downtown area,” added Jennings.

“Hopefully with the support of the City and people’s demands we will get live music back downtown, where it belongs,” said Jennings.

The return of the Colonial disc commences the launch of the new Downtown Yonge BIA initiative ‘Music Legacy on Yonge Street’ in collaboration with MOD Developments. The first video (featured above) in this documentary series features The Colonial Tavern. In the YouTube video, music enthusiasts can “Go back in time and learn about what the Colonial meant to Toronto, as well as hear some little-known facts and memories shared from people who were there during its glory days.”