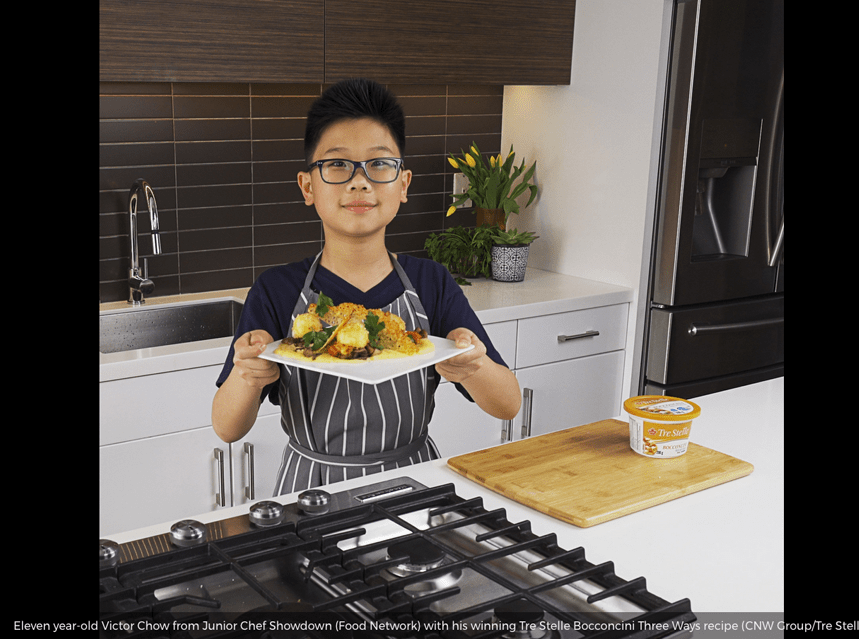 The dish was so refined that the judges told Victor it could have come from a Micheline Star restaurant.

Victor had to create a dish where cheese was the hero.  He had his choice among Tre Stelle’s mozzarella, feta, mascarpone and more, but chose bocconcini because he knew he could use it in more ways than one to give it star appeal.

And he succeeded! Victor showcased the bocconcini in three unique and mouth-watering ways: he melted it into the polenta, deep-fried it to create cheese fritters and shredded it for fried bocconcini crisps as a garnish.

“I knew that using the Tre Stelle Bocconcini in three different ways could make this dish spectacular, and I knew it was something I could do because I’d made each of these components for my family in the past,” said Victor.  “We love cheese and eat it at least twice a week!”

The “Big Cheese” episode was the first challenge Victor won, and it couldn’t have come at a better time, as Tre Stelle offered a $5,000 cash prize to the winner.  Victor plans to donate a portion of his winnings to a food bank, and his elementary school to purchase kitchen equipment for kids to learn how to cook.  He’s also hoping to buy a laptop and save the rest.

“Winning the “Big Cheese” challenge was amazing as all of the other contestants had incredible recipes too,” said Victor, who wants to encourage more kids to cook and try new recipes.  His three tips for cooking with cheese for other kids are:

“We were blown away by Victor and his masterful bocconcini dish,” said Tre Stelle President Eric Elmhirst. “Watching these small but might culinary phenoms demonstrate creative ways to cook with cheese was an absolute pleasure and unbelievably impressive – we’re pleased to be able to share Victor’s recipe with the rest of Canada.”

For the recipe, images, and an instructional video by Victor recreating his Bocconcini Three Ways dish, click here. Watch Victor and other Junior Chef Showdown contestants at www.foodnetwork.ca.