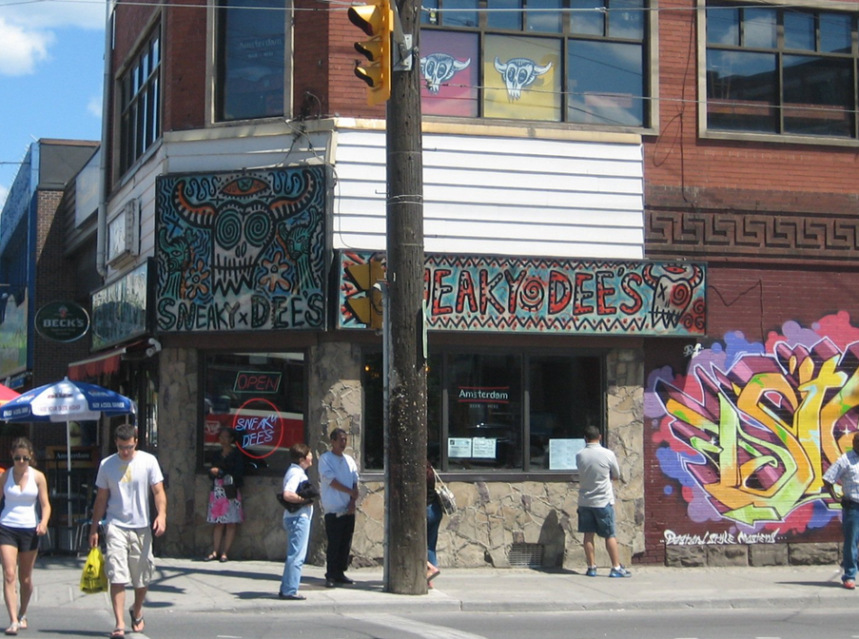 TORONTO, ON., Sept. 8, 2020 — A popular go-to venue for live indie music and late-night nachos since the late eighties, Sneaky Dee’s at College and Bathurst near Kensington Market, may be forced to close for good if condo developers get their way. A huge local outpouring of support including petition to save the character nightclub is gaining momentum already with over 5,700 signatures.

A Development Application was put forward on September 4, 2020 to build new residential and commercial space at 419 College (near Bathurst).

According to the proposal, the developers want to build a “13-storey mixed-use building with retail/commercial at grade. The proposal consists of a total of 169 dwelling units and 13,009.1 square metres of combined residential and non-residential gross floor area.”

“So many people are talking about it, it has begun to trend on Twitter. Many point to how the venue served as a rite of passage for many young people stepping into Toronto’s Music Scene,” reads the petition on chang.org.

“We have already lost other important venues in Toronto: The Hideout, Coalition, Silver Dollar, The Central and Many More. We can’t afford to lose another one,” the petition pleads.

Mayor John Tory also expressed his concerns about losing yet another live performance venue, emphasizing the importance of live venues to the city of Toronto.

“We know the importance of music venues in our city – that’s why we have taken action to help provide property tax relief for these sites to help them remain viable,” Tory told CP24 on Monday.

Tory said that while the application has been filed for the downtown site, planning officials have yet to review it and that he is committed to working with local councillor Mike Layton and listening to the community to make sure whatever happens at the Sneaky Dee’s location is in the best interests of the community. ““Hearing from the community is an important part of the planning process and I want to assure people that both councillor Layton and myself will be listening to their feedback,” Tory told CP24.

Meanwhile, Councillor Layton expressed his views on Twitter. “Late Friday before the long weekend a developer submitted an application that includes the site of iconic Sneaky Dee’s,” tweeted Layton. “I’ve watched friends bands upstairs and eaten kings crown at brunch for as long as I can remember. We can’t lose institutions like these.”

Sneaky Dee’s is one of those venues where up and coming bands can get their first taste of playing in front of live audiences. It has always been recognised as a cool funky place to check out new bands upstairs while enjoying casual tex-mex eats with friends on the main floor.