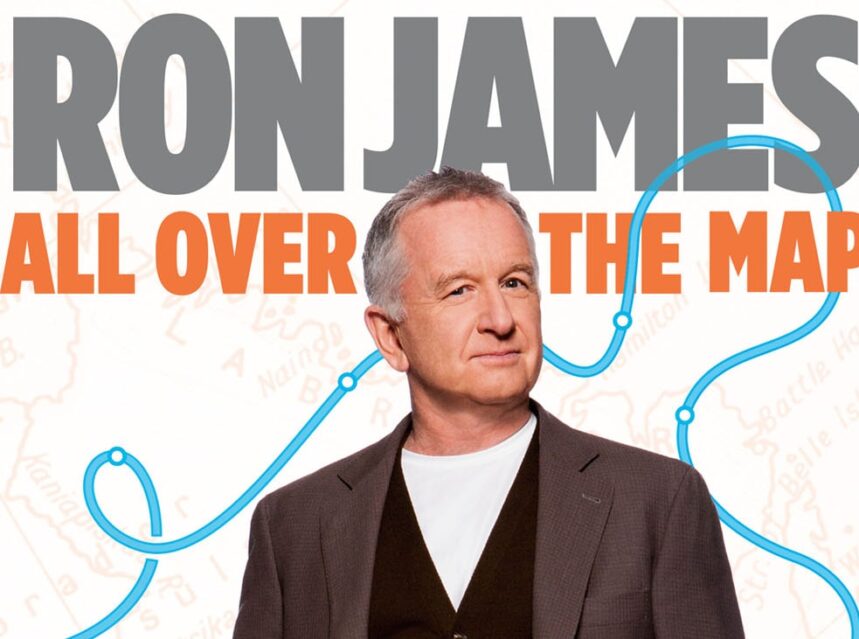 All Over the Map, Rambles and Ruminations from the Canadian Road by Ron James is now available in bookstores, published by Penguin Random House Canada

TORONTO, ON, Oct. 12, 2021 How would you like to hop in the car and take a cross country road trip with Ron James, one of Canada’s most prolific comics? Well that’s what you are doing when you read All Over the Map, Rambles and Ruminations from the Canadian Road by Ron James, published by Penguin Random House. James makes his literary debut in this hilarious book that contains tales of the road—Ron’s stories along with stories of about the folks Ron meets in coffee shops, cafes and such.

Asked what inspired him to write a book, Ron says: “I was approached by Random House several years ago asking me to write the book and they commissioned it and I was diligent about keeping journals while on the road so I could reference them. From the 20 years that I was playing soft seat theatres and five years in the clubs, and being from Nova Scotia, there’s stories about family, stories about growing up, stories about the people and places I’ve had the good fortune to embrace in my travels and what I call the heart line of people and place. It’s their story as much as mine and that was the hidden boon of following my bliss and blazing a trail as a comic in soft seat theatres.”

“There’s stuff about Los Angeles. I spent three years down there chasing the sitcom dream, but there’s all kinds of people who permeate the page—an elderly waitress who found life and a second chance in Alberta in the ‘70’s, there’s oil rig workers who speak to me in Starbucks …there’s stories about my life on the road and my life in show business and experiences that I’ve had working with networks on the two series I created, and the price you pay for that. It’s about the early days of working the clubs and lessons learned. It’s a love letter to the country about good times and bad and adventures had,” says James.

The chapters have intriguing titles that entice you to want to read on to see what happens, such as Two Days in Saskatchewan, The Magnetic North and Car from Away. For his legion of fans, this book captures the wit and humour of Ron James in a cleverly written must-read book.

Asked which stories are his favourites, Ron James replies: “I really don’t have a favourite as they were all challenging and interesting to write. There are however two stories that really resonate for me. One is called Adidas Mexicana and it’s about my uncle who I am named after, who fought his addiction to meth years ago and was homeless on the streets of Toronto for a couple of years and then kind of pivoting, and these things come full circle. He was a politically incorrect salty-tongued Cape Bretoner and he had a hard life but he found salvation. There’s a lot of laughs in there too!”

The other story that resonates with James is called Verne. “It’s where I gave a stranded Indigenous man a ride from a Petro Can in Airdrie, Alberta and how he was trying to get to his nephew’s house in Leduc. It’s two people in a car crossing the great divide. The onion peels away throughout the story and we eventually discover that what I thought might have been a fraudulent claim—him trying to get to his nephew’s house—was indeed true, but the context of it all is Second City. The book was difficult at times to write as you had to stick with a strong narrative and not just jokes all the time. That’s what the publisher wanted and I’m glad they did because it makes for a better read.”

Ron James was born in 1958 in Nova Scotia and raised primarily in Halifax. After graduating from Acadia University with a B.A. in History he moved to Toronto and joined the premiere breeding ground of North American comedy, Second City. In 1990 he and his young family moved to Los Angeles where James was cast in a syndicated series called My Talk Show. The show was cancelled after three years, and Ron James then returned to Toronto in 1993 and wrote the critically acclaimed one-man show Up and Down in Shaky Town: One Man’s Journey Through the California Dream. That experience moved him into the world of stand-up comedy.

After five years of doing standup, James was invited to do a 90-minute special on Shaky Town on CTV’s Comedy Network. He was voted Comedian of the Year several consecutive times at the Canadian Comedy Awards and appeared several times on Just for Laughs, the Halifax Comedy Festival and more. He starred in Blackfly, a TV series he wrote for Global TV. Montreal’s internationally renowned comedy festival Just for Laughs commissioned James for a one-show called The Road Between My Ears which became the first of a record-breaking nine one-hour specials on CBC. The Ron James Show followed and ran for five years on CBC TV.

“Sometimes the live audience wasn’t very alive at all!” he jokes about The Ron James Show. “I don’t think CBC really got me. We were bounced around the dial in seven different time slots, so it was difficult for people to find the show. But I had a great run, I learned a great deal, it made me a better comedian working in a room with other writers, and I thank them for that.”

Today James splits his time between Toronto and Nova Scotia, and he continues to tour and play to sold-out theatres across Canada.

In the book he talks about his early days of struggling as an aspiring comedian to get laughs. Asked how he was able to turn this around, he answers: “Stage time, stage time, stage time. And hard work. You need the content. You can’t rely on the same jokes all the time.”

Ron James offers this advice to young aspiring comedians. “Life is all about the long haul and it’s one gig, one show at a time. Every gig matters. The first hammer a carpenter picks up he doesn’t build a mansion; you have to hit your thumb first. Keep your eyes on the prize and have standards. No one hands it to you. It’s all in the page. When I see lazy comedy, I get livid, because it’s such a luxury to be able to do what we do. If you don’t take it seriously then you don’t belong up there.”

Ron James describes stand-up comedy as “channelling the light force.” He adds; “That’s why I continue to go back to the road. It’s very simple—get laughs and get off. It’s you, and audience and a microphone. You are there for one thing—to laugh. In a world of chaos and one that is becoming increasingly fractured along so many different lines, for the 90 minutes or two hours I’m on stage, everybody’s on the same page, trying to laugh their worries away. It’s a great sense of satisfaction that a comedian’s job is actualized when he lights the life journey of comedy and makes people laugh. That’s what I love. I leave the shows feeling that I’ve done my job. All I have ever wanted is to work and to maintain a standard that I can be proud of.”

There’s a quote in All Over the Map by Joseph Campbell which states “Follow your bliss.” Asked if Ron James is following his bliss, he quickly answers, “Yes, and I have been following my bliss for 42 years!”

All Over the Map, Rambles and Ruminations from the Canadian Road by Ron James, is available now in bookstores, published by Penguin Random House Canada.