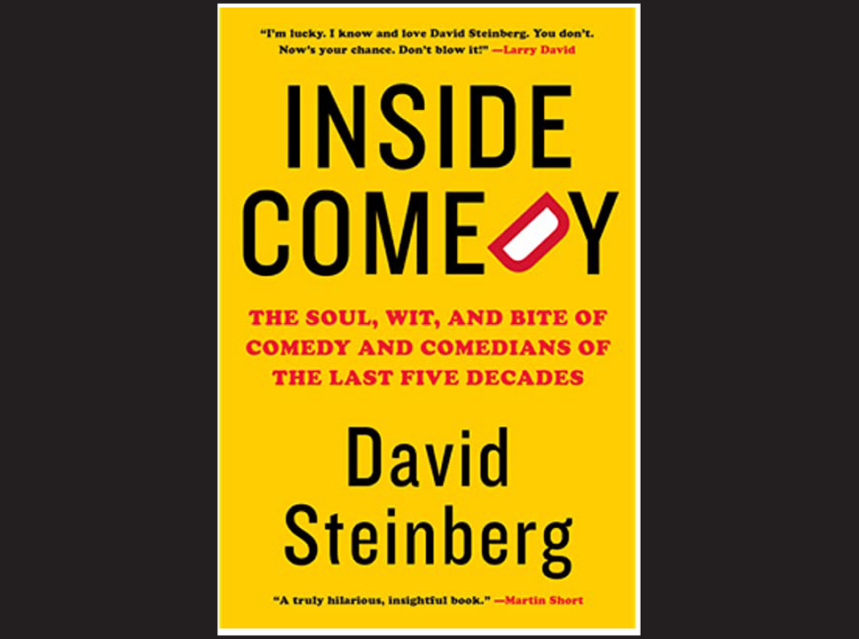 Inside Comedy – There are a great deal of people who deeply appreciate comedy in all forms, plus the men and women who delivered those laughs whether it be in a club, onstage, in the movies, radio, TV and on LP records. As well, there are many people who have watched, listened to and followed the lives, careers and humour of many of these great names in comedy, and can be either armchair or scholarly experts on the subject. But one type of comedy expert carries a greater degree of credibility, and it’s those rare few who are bonafide comedians by trade. Being in the advantageous position of working within the comedy world as a stand-up, actor, writer, producer or director, rubbing elbows with legendary contemporaries on a regular basis, sets them head and shoulders above your everyday comedy enthusiast. In that respect, two people quickly come to mind when it comes to the comedian-cum-comedy expert: Judd Apatow and David Steinberg.

For Apatow, his road to a successful career as a stand-up comedian/writer/director/producer had its roots as a teenage comedy fan who used his position with his high school’s radio station (and a lot of guts and ambition) to line up face-to-face interviews with some of the greatest comedians of all time and of the 1980s, including an up-and-coming stand-up comic named Jerry Seinfeld (and the best of those interviews were later compiled and ended up as a best selling book called Sick in the Head).

The other person in that category is David Steinberg, the native of Winnipeg who, while attending rabbinical school in Chicago during the early 60s, caught a performance by legendary Lenny Bruce, and forever changed his career path from the synagogue to stand-up comedy. And over the next five decades, he carved up a career that saw him as a member of the Second City troupe, do 140 appearances on Johnny Carson’s Tonight Show, recorded Grammy-nominated albums, became a much respected TV director who helmed such classic sitcoms as Seinfeld, The Bob Newhart Show, Designing Women and Curb Your Enthusiasm, and hosted his own comedy interview show called Inside Comedy, and gets the chance to encounter his share of great comedy legends and popular stand-up comedians.

And like Apatow, Steinberg has transcended this impressive comedy career into book form, and is a definite must-read for comedy fans and aficionados everywhere, which is entitled Inside Comedy.

Inside Comedy reads like a combination memoir and “meetings with great comedy minds”. We get Steinberg’s beginnings in the streets of the predominantly Jewish North Winnipeg neighbourhood where he grew up, his years as an aspiring rabbinical student, and his comedy schooling thanks to Second City and as a regular on The Smothers Brothers Comedy Hour, where his sermon monologues made him a rising star, and rose the ire of CBS (where the Smothers’ show aired) and conservative Middle America viewers.

But the meat of this book is Steinberg’s personal, reader-friendly profiles of the numerous comedians he has befriended or worked with, and his uncomplicated analyses of their respective styles of humour and contributions to the world of comedy. And these profiles are amply sweetened with a wealth of anecdotes that makes us share with Steinberg how lucky he was to encounter so many of the greatest comedians ever that has made so many generations of audiences laugh at their respective unique brand of humour.

One of my favourite set of anecdotes deal with Steinberg’s favourite (mine also) comedian Groucho Marx, which evolved into a friendship after he appeared as a guest on an interview show Steinberg hosted in 1969-70 called “Music Scene”. The one thing that Steinberg treasured from that friendship was getting the chance to regularly go to lunch with Groucho at the famous Hillcrest Country Club in L.A., where during the early 70s, he broke bread and absorbed a great deal of comedy stories and know-how from such masters as Milton Berle, Danny Kaye, George Burns, and Danny Thomas. Another favourite Groucho story that he related to Steinberg, which is featured in the book, was the time he had an in-person meeting with poet T.S. Eliot in London, and the only thing he wanted to discuss with Groucho was not literature, but how the Marx Brothers pulled off many of their famous routines in their movies.

What makes Inside Comedy works so well is that it’s not a braggart’s or name dropper’s inside look at the comedy world. Steinberg’s decades of diverse comedy experience gives him the license and credibility to tell these stories, and give his take on why these many generations of comedy talent has contributed so much to the evolution of comedy.

Inside Comedy is the book that comedy fans deserve. It’s an ideal behind-the-scenes look into the thriving close-knit industry by someone who has experienced it working his way up from ground zero. Steinberg manages to bridge so many generations by being so open-minded to the builders and the legends who have presented their legacies to the millions who need the laughs so badly.