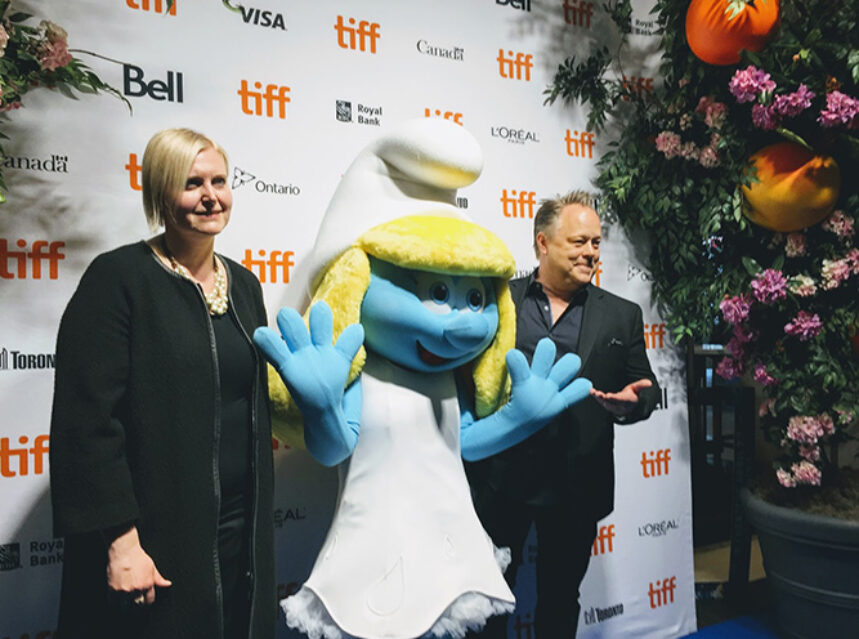 Smurfs: The Lost Village – It was a smurfy night at the opening of the TIFF Kids International Film Festival with the premiere of “Smurfs: The Lost Village”. To celebrate the festival’s 20th-anniversary families were taken on an adventure to a fun smurf village, smurfy face painting, a screening of the movie, and a photo op on the blue carpet with Smurfette herself (squeeeeee)!

This Smurfs film goes back to its fully animated roots in a new adventure with Smurfette, Brainy, Hefty and Clumsy going on a quest to find the legendary and mysterious lost village before the evil (and Smurf-obsessed) wizard Gargamel does. Director Kelly Asbury says, “They make a team that goes together, sort of like ‘Stand By Me’, ‘The Wizard of Oz’ or ‘Goonies’.” In this case it’s Smurfette leading the gang on the adventure,”Smurfette’s story is the central one.” Smurfette has long been a favourite for many of us who grew up with these little blue peeps, and now she’s being re-introduced as the main player to a whole new group of young smurfy fans.

As well as having big films like “Smurfs: The Lost Village” as the opening night film, the festival has long been known for its wide array of domestic and foreign films for kids and youth. This year’s celebration has some fantastic films that not only seek to entertain and amuse audiences but also to engage and enlighten them. The festival’s Director of Youth Learning, Elizabeth Muskala says it best:

“The festival is great because for a lot of young people it’s their first experience not only in a cinema, but also seeing international films, seeing English subtitles on screen, so there are so many opportunities within the context of the festival to learn about cultures from around the world and different perspectives. It’s intelligent cinema for young people”.

Another cool and super fun facet of TIFF Kids is digiPlaySpace, the hands-on, activity based ‘tech-park’ that introduces kids (and plenty of adults as well) to all kinds of new innovations and technologies that are shaping our world today. Get creative with coding, robotics, A.I., and lots of other games and installations from around the world that will inspire and engage the whole family.

TIFF has long been a world leader in film culture, entertainment, and education, with an incredibly strong program for kids and youth. Year-round workshops, camps, and activities are curated to inspire and motivate the next generation of film makers and artists, and the TIFF Kids International Film Festival is a great way for them to explore the diverse and amazing world of film.

The festival is on now until April 23rd, for more info on movie tickets, times and festival activities go to the TIFF website.