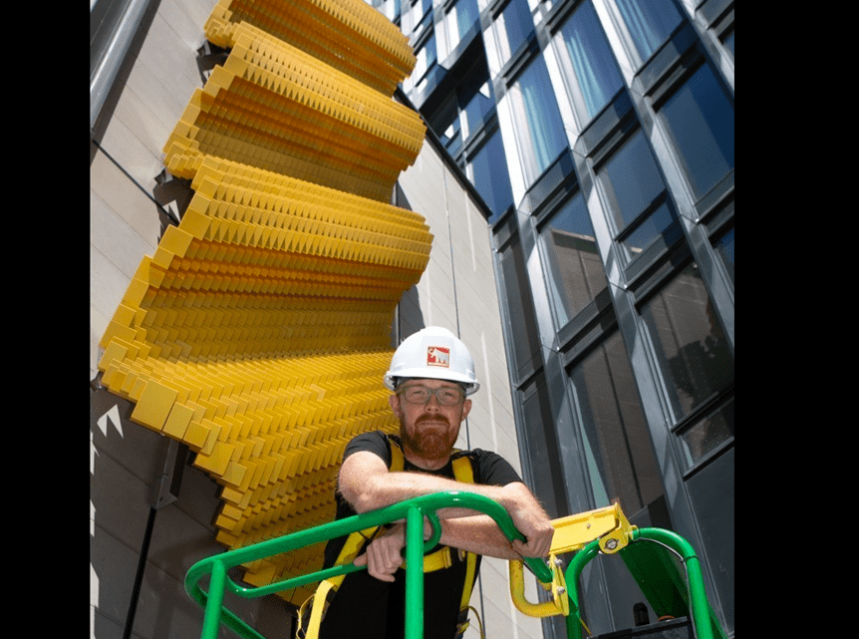 The striking tower at Church and Shuter got an extra boost of golden glam with a unique aluminum installation. The piece which is displayed directly above the Fleur’s front entrance, is 8 feet wide and 25 feet tall, and features a wave pattern which inspired its name Digital Wave. According to Donovan, Minecraft, a popular video game he plays with his son, prompted him to enter a LEGO contest where he could focus on his passion for building geometric shapes, a passion that sparked the idea for the design. Donovan adds that he wanted to make what he does doing virtually in real life, which is what gave birth to the project.

“My approach to art making, is like when I make these LEGO pieces with tens of thousands of parts, there’s this kind of obsessive, compulsive, repeated activity that I do, and even though this is different, it’s very much a translation of that process, said Donovan.

The large installation was assembled off site and carefully mounted on the tower with the use of a crane. Donovan pointed out that while he embraced the challenge, there were several factors to be considered in the design process including creating something that could withstand Toronto’s harsh elements, as well as ensuring it looked substantial enough on the massive tower.

“It is rare to have a public art component that can be mounted on a wall,” said art consultant Fela Grunwald who put forth Donovan as a candidate to Menkes. “They usually call for independent sculptures. I thought of Matt because his indoor series of LEGO works were in relief and this added an interesting sculptural element.”

“What I like about having public art affixed to the exterior of the building is that this outdoor work can be enjoyed by the general public as well as the residents, especially for a building like Fleur which neighbours the lively Dundas Square,” said Jared Menkes, Executive Vice President, High Rise. “What attracted me to Matt’s work is that it was simple concept with a very intricate design. I also felt it added a nice pop to the building without taking over.”

According to Donovan, the choice of gold anodizing was in response to what he felt would look good beside the colour backdrop of the building, adding it reminded him of anodized aluminum architectural details from the 50s and 60s era.

Close to the action on Yonge Street, yet quietly sheltered, Fleur’s tower ascends from a unique three-storey glass and stone podium, designed by the talented local firm architectsAlliance. A subtle garden theme, inspired by the surrounding Garden District welcomes residents as they approach the sleek tower, which much like its community stands as a symbol of fashion and art.