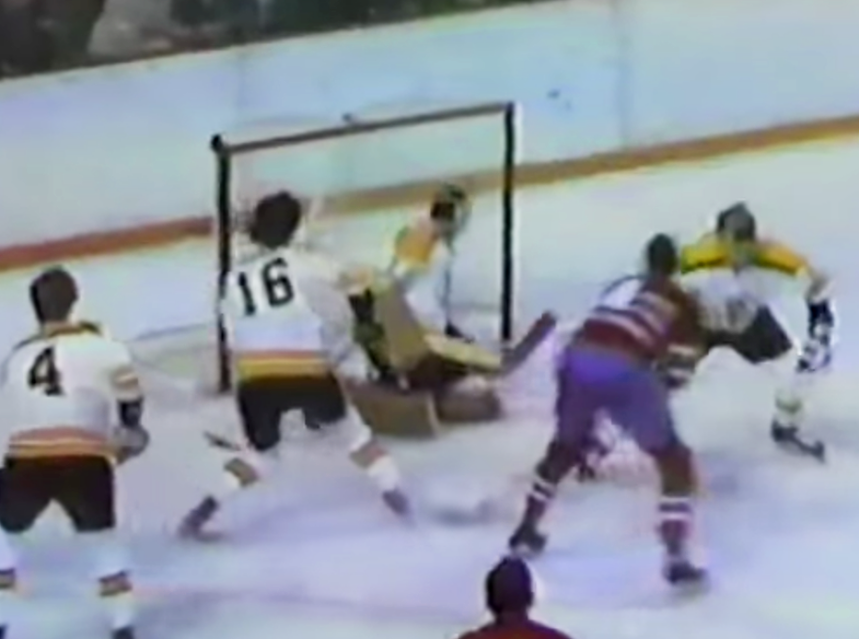 1971: A Hockey Story – So far, the story of the 2020-2021 Montreal Canadiens is practically a Cinderella story. A team that was experiencing a great deal of regular season and playoff frustration (and this year’s regular season was no exception), with a combination of seasoned veterans and young up and coming rookies who didn’t start to gel until the playoffs began. So far, the Habs have convincingly defeated the Toronto Maple Leafs and the Winnipeg Jets in their division playoffs, and are now in the semi-finals, waiting for the outcome of the Vegas Golden Knights — Colorado Avalanche playoff series. If this streak continues to its logical conclusion, then the Habs’ 25th Stanley Cup championship will finally become a reality after a 28-year drought.

This scenario almost echoes the fortunes of the Habs of 50 years ago. In 1970-71, they were still  smarting from not making the playoffs in 1969-70, and with legendary team captain Jean Beliveau playing in his final season, he was leading a team filled with hardened veterans who were familiar with winning Stanley Cups (Henri Richard, Jacques Lemaire, Yvan Cournoyer, John Ferguson, etc.) and a bunch of untested rookies (Rejean Houle, Marc Tardif, Phil Roberto, Guy Lapointe and a young goalie who was studying law at McGill University named Ken Dryden).

The Habs made the playoffs by the skin of their teeth and somehow they gelled, too. Bringing back their trademark style of “fire wagon hockey”, the Canadiens did the impossible by eliminating the defending Stanley Cup champion Boston Bruins in the quarter-finals, then faced formidable opponents in the Minnesota North Stars and the Chicago Blackhawks in two hard-fought series to win their 17th Stanley Cup. This win, which helped propel the 1970s dynasty, was regarded by many as probably the Canadiens’ greatest victory, because they entered the playoffs as underdogs with no expectations of going all the way.

Perhaps the highest compliment was paid to the team by former player and coach Toe Blake, who himself helmed the Canadiens to eight Stanley Cups. As he observed the players celebrating their Cinderella story victory, Blake said: “This is the greatest victory since I have been around the Canadiens … No team has ever shown more heart under pressure.”

Michael E. Moore, a Montreal-born hockey journalist who now resides in Ontario, fondly recaptures the excitement and euphoria of the Canadiens’ impossible dream Stanley Cup run 50 years ago in his new book 1971: A Hockey Story.

From the forgettable 1970 season to the Stanley Cup victory parade the following year, Moore has produced an entertaining book that captures every essence and element that makes up a pro sports team’s dream season. And he has accomplished that quite admirably thanks to diligent research, where you can find out such unknown facts such as for their efforts during the playoffs, each Habs player received a brand new TV set instead of a Stanley Cup ring; or that Blackhawks owner Bill Wirtz responded to the blackout of home games during the finals by offering them to be screen via closed circuit television in several venues across the city for $6 a head (including the Bismarck Hotel, which was owned by the Wirtz family, where for a budget-busting $125, you can watch the game on closed-circuit TV, complete with custom and bar service). As well, Moore offers some pop culture tidbits to parallel what was going on with the outside world throughout the insular world of the playoffs (for example, on April 23, 1971, the day before the Canadiens-North Stars semi-finals played its first game in Minnesota, the Rolling Stones’ hit album “Sticky Fingers” was released).

However, what makes this book so fascinating to read, is Moore’s strong ability to recapture the mechanics of the Canadiens’ 1970-71 season both on and off the ice, from Sam Pollock’s GM genius in convincing Jean Beliveau to stay for one more season as a player and the manoeuvers that landed him the needed young players and future draft choices that would cement the 1970s dynasty; to the controversies like Henri Richard’s criticism of coach Al McNeil over benching him during the finals, which unexpectedly was blown out of proportion because of the political overtones that it attracted; to the broadcast quality blow-by-blow, goal-by-goal, play-by-play recreations of every game in the playoffs that practically takes you back in time to when those games were originally played. It would have made the late Danny Gallivan proud.

1971: A Hockey Story is definitely a must-read for Canadiens fans everywhere. For longtime fans (especially those who were old enough to appreciate 1970-71 as it happened), this is a wonderful nostalgia trip, as they explore one famous chapter that became part of the story of the glory days of the Montreal Canadiens. For younger fans who have not yet experienced the excitement of a Stanley Cup championship season, this book is a terrific primer on the anatomy of an underdog Stanley Cup winning team, and how the 2020-2021 Habs’ trail to the Cup have so many parallels of the trail the team took exactly 50 years ago.

Other articles from – totimes.ca – otttimes.ca – mtltimes.ca