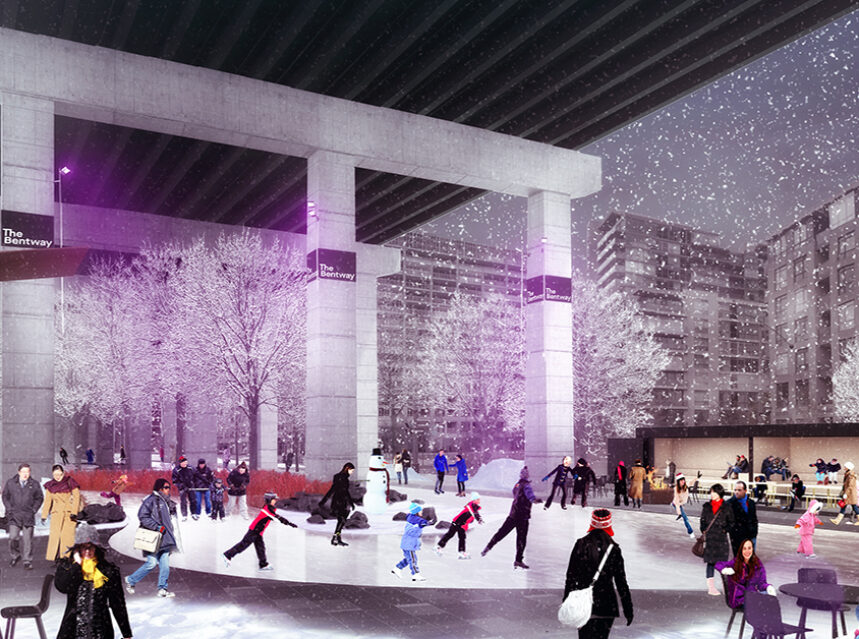 Skate for free at Gardiner Expressway – The Bentway (formerly known as Project: Under Gardiner), a new urban space built under the Gardiner Expressway often compare to New York’s High Line, is finally opening to public after two years of construction.

This new public space will transform the vacant and forgotten area underneath Toronto’s Gardiner Expressway into a new gathering place for our city’s growing population. The official opening party is set to take place on January 6th.

Stretching from Strachan Avenue to Bathurst Street, the 1.75 km trail and series of public spaces that forms “The Bentway” will knit together seven neighbourhoods – Exhibition Place, Liberty Village, Niagara, Fort York Neighbourhood, Bathurst Quay, Wellington Place and CityPlace – and become a gateway to the waterfront, while providing access to important attractions and destinations – from the Budweiser Stage to the Rogers Centre and Harbourfront Centre. This new urban corridor will activate the community with a continuous multi-use trail providing access to year-round activities and events, including gardens, a skate trail, recreational amenities, public markets, public art, special exhibitions, festivals, theatre and musical performances and more.

The Bentway portion that runs between the Fort York Visitor Centre and Bathurst Street includes a skating trail under the Expressway and other activities, including entertainment, live music on week-ends, art installations, food and drink stands.

An admission-free opening party on January 6

On January 6 as of 11 AM, Torontonians are invited to celebrate the opening of the brand-new Bentway Skate Trail.  Skate rentals will be available and admission to the site will be free. On opening day, DJs will be spinning from 11:30am-11pm.

More details about the opening party:

Evening Lantern Tours
Saturday, January 6, 6 p.m., 7 p.m., 8 p.m. and 9 p.m.
See Fort York in a ‘new’ light! Missed one of our daily tours? Join a special lantern tour and catch a glimpse of garrison life after dark. Our interpretive staff will guide you through a selection of Fort York’s War of 1812-era buildings using exclusively 19th century lighting. These FREE tours meet in the Fort York Visitor Centre on the hour from 6 p.m. to 9 p.m. Saturday only- don’t miss out! Spaces are limited.

Mayor’s Skating Party
Sunday, January 7, 1 p.m. to 4 p.m.
The Bentway will host the Mayor’s Skating Party, and Fort York will be open until 6 p.m. to celebrate! With tours throughout the day, there’s plenty of opportunity to explore the history of Toronto’s founding urban landscape – before or after your skate!