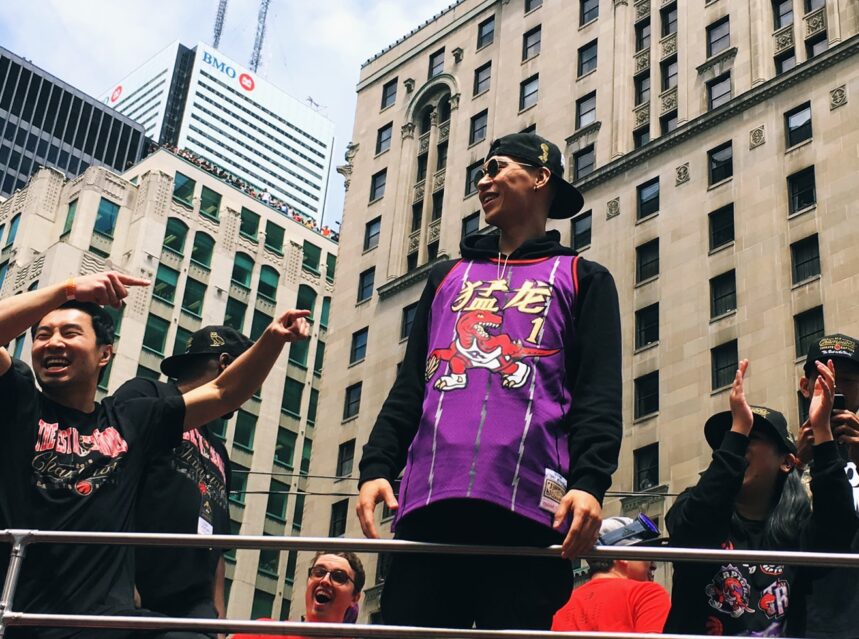 Though founded back in 1995, the NBA’s latest expansion project in Toronto wouldn’t put the Raptors on the map for almost two decades. The franchise languished in Toronto, along with most other pro sports teams that had seen new establishments in the city.

But that didn’t stop fans from showing love and support to their new team. In fact, despite mediocre records, the team managed to land a Vince Carter trade and started setting league records for attendance. By 2000, they’d even made it to the playoffs.

Still, it wouldn’t be until a full overhaul from general manager Bryan Colangelo in 2009 that the team would start to climb toward an inevitable Finals run. Under Masai Ujiri, who replaced Colangelo in 2013, the Raptors began to sign major names like DeMar DeRozan and Kyle Lowry.

And then came the fateful 2018 trade, in which Ujiri managed to nab Kawhi Leonard, Danny Green, and Marc Gasol in a sweep. What began in the mid-90s as a pipe dream became a reality as the stars led the Raptors to their first Eastern Conference Championship, which led to their first NBA Finals Appearance and NBA Championship win over the favored Golden State Warriors.

What followed was a citywide celebration that bled into areas around Ontario. The “We The North” campaign had finally brought a major win not just to Toronto, but to Canada’s only NBA team. Though the team has yet to make another Finals run, the city hasn’t let the hype fade.

One of the most tangible ways fans interact with the league is through betting. While huge numbers of US fans are now jumping on the bandwagon with sportsbooks, NBA fans in Canada have had access to betting lines for years. However, there’s only recently been a new uptick in interest as legal online sports betting grows in Ontario and simplifies the betting process for remote fans.

Whether locals are betting on the Raptors today remains to be seen, as they tread water in the Eastern Conference. Regardless, fans in the city and Ontario are toeing the line as they wait for the next Championship Series appearance. One thing’s for sure: Raptor culture is here to stay.

Approach from the Ground Up

Raptors fans have a reputation for being passionate and, as relative newcomers to the NBA’s list of silverware-holding teams, have something to prove. Superfans like Nav Bhatia have long been a visible part of the team’s culture, but it’s the franchise itself that’s purposefully sought to cultivate an engaging fandom.

The Raptors website gives an explicit promise: “We are empowered. We are determined to learn, to lead, and to love. We are all human. We are the Toronto Raptors.” Some might think it sounds a little too feel-good for a competitive team, while others might wonder what it has to do with basketball.

Regardless, the statement leaves plenty of room for non-sports fans to join the bandwagon. It doesn’t prioritize victory, but a sense of community. As a new franchise, the Raptors craze has been largely about basketball… but it’s also been about the city of Toronto and how other North American cities view it.

A Fandom with Subsets

As mentioned above, the Raptors quickly became an aspect of Toronto life that locals could identify with. In fact, as the home of Canada’s only NBA team, there were basketball fans glomming onto the team from across the country. The phrase “We The North” meant something personal to fans of all stripes.

But it also got granular, as being a Raptors fan brought new groups of people together. Dividing lines ceased as locals hashed out the latest breaking news and trade rumors, then headed to Scotiabank Arena where tickets were sold out.

They formed deep rivalries with the Nets and Knicks. The team even got special OVO-themed jerseys from Drake, and then OVO and the Raptors poured millions in donations back into Toronto via the Welcome Toronto program.

The team was for the city, and vice versa—and this isn’t unique to the Raptors and their overwhelming presence in Toronto. The team is owned by MLSE, Maple Leaf Sports & Entertainment, which also owns the NHL’s Maple Leafs, CFL’s Toronto Argonauts, and the MLS’s Toronto FC.

While some might raise their eyebrows at the conglomeration of the city’s professional sports teams (and arenas), MLSE has created a Toronto-first sporting culture within each of its subsidiaries. The company can funnel resources into each of the city’s teams as needed, which allows for more cooperation between teams.

This ultimately improves the fan experience by creating a centralized entity for branding various teams and sports, as well as allocating funds for community projects. In some cases, there are sports deals related to merchandising and tickets to help cross-promote for various Toronto-based teams.

Pivot your life and business with life coach Sonia Zarbatany