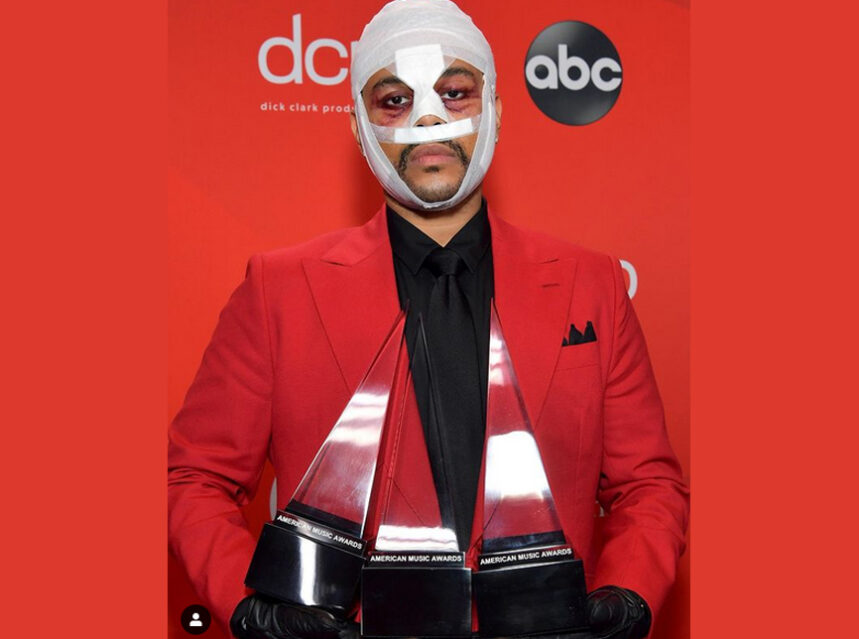 A major eyebrow-raising name missing from the Grammy nominations list announced Tuesday, is none other than megastar, The Weeknd, and he is making his feelings known about the glaring omission.

Considering The Weeknd’s 2020 album release, After Hours was one of the year’s top sellers, with over 1.8 billion streams thus far, while one of its singles (already heard in grocery stores), “Blinding Lights,” has garnered over 882 million streams, it is a head-scratcher to be absent from the list. It wasn’t nominated in any category, including record of the year, song of the year, best pop solo performance or best music video.

Also, The Weeknd, took home three awards just last week at the AMA’s winning favourite male artist – soul/R&B; favourite album – soul/R&B; and favourite song – soul/R&B and performed a medley of “In Your Eyes” and “Save Your Tears” with Kenny G from his Billboard 200-topping album After Hours.

So it comes as no surprise that The Weeknd took to Twitter and Instagram soon after the announcement yesterday to convey his reaction and accuse the governing body of corruption and lacking transparency.

“The Grammys remain corrupt,” he tweeted. “You owe me, my fans and the industry transparency…” said the Toronto singer, who was recently announced as the headliner for the Super Bowl halftimes show in February.

The Weeknd also posted that he and the Grammys were “Collaboratively planning a performance for weeks,” and his status has gone from that “to not being invited?” In my opinion zero nominations = you’re not invited!” said The Weeknd.

In his second tweet (above) the Toronto music artist alludes to the ongoing exchange between his team and The Recording Academy, and how implies how things went from them wanting him to perform at the awards, to him not being invited.

One source told Rolling Stone, and TMZ that there was a a back and forth between The Weeknd team and The Recording Academy surrounding whether he would perform on the Grammys as well as at the Super Bowl. The sources say The Weeknd was given an ultimatum that it’s either one or the other, but eventually it was reportedly agreed upon that he would perform at both events.

In response, Harvey Mason Jr., the Recording Academy’s chair and interim president/CEO, released a statement to media saying, “We understand that The Weeknd is disappointed at not being nominated. I was surprised and can empathize with what he’s feeling. His music this year was excellent…We were thrilled when we found out he would be performing at the upcoming Super Bowl and we would have loved to have him also perform on the Grammy stage the weekend before …To be clear, voting in all categories ended well before The Weeknd’s performance at the Super Bowl was announced, so in no way could it have affected the nomination process.”

Mason Jr. told Billboard that perhaps After Hours fell victim to being moved into a different more hotly contested Best Pop Vocal category. Billboard explains that, “The Weeknd’s camp entered After Hours in the best progressive R&B album category, the new name for best urban contemporary album, where The Weeknd won two of his three Grammys to date. In the Grammy screening process, the album was moved to the best pop vocal album category.”

The Best Pop album category had 186 entries as opposed to the 77 entries The Weeknd’s album would have been up against in the Best Progressive R&B album category.

Meanwhile, pop category nominations are not reviewed by the committee so The Weeknd’s entries for best pop solo performance for “Blinding Lights,” best pop duo/group performance for “In Your Eyes” (featuring Doja Cat) and best pop vocal album for After Hours didn’t get enough member votes.

And not only was The Weeknd not nominated in the music categories, he was also not nominated for his entry of “Blinding Lights” for Best Video, which already won Video of the Year at the 2020 MTV Video Awards. The MTV video award he nominees are decided by MTV producers and executives but the winners are voted on by the general public.

So, how one of the year’s best-selling artists is completely shut of Grammy nominations, is anyone’s guess considering the immense popularity of The Weeknd’s hit single “Blinding Lights” hit album After Hours and MTV award-winning video for Blinding Lights. Some are likening the omission to when Prince’s When Doves Cry received zero Grammy nominations in 1984.

by TO Times staff