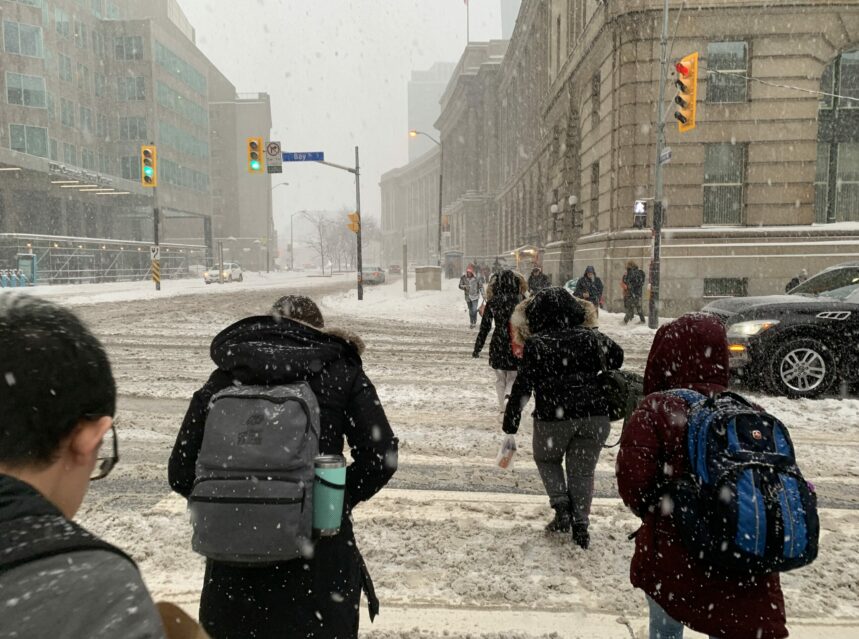 Toronto: Rain turns to up-to-20cm snow – Toronto could be seeing its third messy winter weekend in a row with snow in the forecast for Saturday preceded by rain on Friday. Those travelling and residing east of Toronto will see greater accumulations of snow on Saturday while the amount of heavy snow that will hit the GTA remains uncertain at this point due to unstable temperatures.

The precipitation begins as rain Friday afternoon and continues through Sunday morning with 15-25 mm of rain expected along the shores of Lake Ontario, through to the Golden Horseshoe and Niagara region increasing to 10-20 mm in the southwest. The rain will change to wet snow and possible ice pellets in the northern GTA and cottage country during the pre-dawn hours Saturday through the morning, before switching to just snow in the afternoon.

Environment Canada also confirms Saturday temperatures in the GTA will range from plus 2 to minus 2 celsius with a mix of snow and rain. They say Sunday will be slightly warmer at plus 3 with another low of minus 2 and a 60 percent chance of flurries.

So be sure to leave extra time when travelling as the roads will be messy.

Because of this temperature fluctuation it is important to keep in mind, if temperatures are just a degree colder than expected, then the GTA will see the rain become heavy snow much earlier in the day Saturday.

The heavy wet snow is more likely to stretch across much of eastern Ontario and parts of the northern and eastern GTA. The Weather Network stresses that because the temperatures could teeter from above to below freezing, there will be a wide range in snow totals across the region.

Portions of central and eastern Ontario will see 10-20 cm of wet snow which might cause tree damage and power outages.

The hardest hit area will be Peterborough and points east which could get up to 25 cm of snow through Sunday morning.

“We will see rain, mixing, snow and even the chance for some icy precipitation this weekend,” says Weather Netwerk meteorologist Kelly Sonnenburg. “At this point, the areas for the greatest snowfall look to be focused to parts of eastern Ontario from Peterborough towards Kingston and Ottawa.”

For the Toronto area expect a third messy messy weekend in a row with snowy, slushy and sometimes icy driving conditions. The weather system is unstable, so it is difficult to predict exactly how much of the precipitation will be snow.

Toronto has already seen a more than normal amount of snowfall this January.

“January temperatures are running well above seasonal, but we have also received above normal snowfall,” says Weather Network meteorologist Dr. Doug Gillham. There are indications of a return to more typical winter temperatures beyond Feb. 5, but confidence is low as to whether there will be an extended period of cold weather,” said Gillham.

Freshly waxed Harry and Meghan do the six