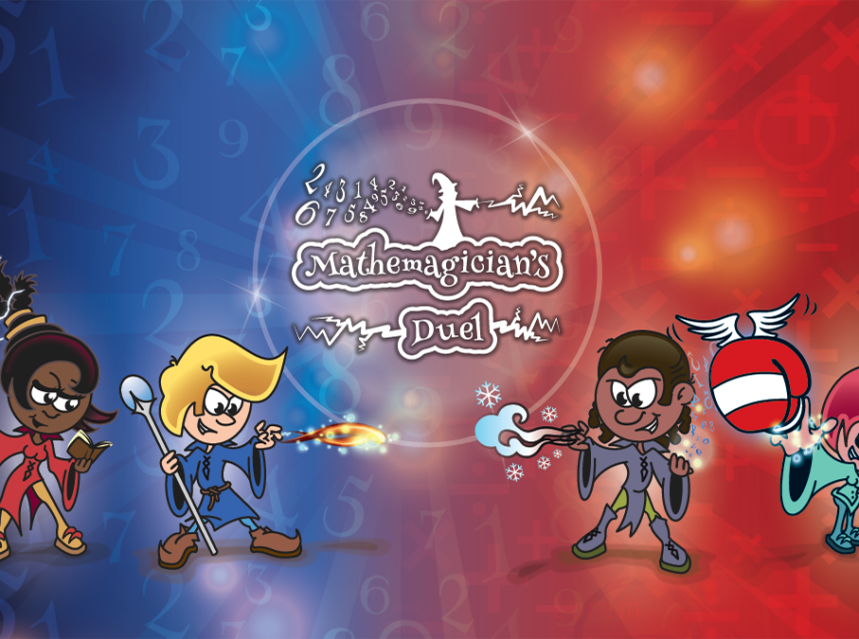 Look out teachers, there’s a new game in town! And unlike that video game that’s distracting your students from their work, this one will have them using math skills without realising they’re doing it. Mathemagician’s Duel, the first release from new GTA business BSGames aims to get young people to engage in practice of math facts in a way that they’ll actually like.

BSGames is a partnership between graphic designer Bill Murphy and Peel school teacher Scott Kelly (The “B” and “S” of BSGames). They launched the business almost a year ago to develop board games and card games, starting with products that promote learning.

“Most games have some learning element, whether it’s adding up points, planning ahead and making strategies, or using social skills to work with others to play,” says Bill. Scott wanted to take it a step further: “Card games such as ‘Magic,’ ‘The Gathering’, ‘Yu-Gi-Oh’, and ‘Pokemon’ are very popular, and I wondered if I could use that duelling-style card game concept, but with a more explicit use of math skills to drive the play.” Thus, Mathemagician’s Duel was born.

Scott came up with the idea for the card game and created the first set on hand-drawn index cards. After a few play-throughs, he made a few more decks of cards by putting the index cards through his printer because, he says, chuckling, “no one could read my handwriting.” Scott then brought these decks of cards to his grade 7 math class, and showed his students how to play.

“The next thing I know, I have students asking to come in at lunch-time to play, and even finishing their work in class early so they could play.” This is when he knew he had something that needed to be shared. Scott contacted his friend Bill and asked him if he could use his graphic design and illustration expertise to make the cards look professional.

“We met while working for a game company and had worked on projects before. I thought this would be fun, but when [Scott] told me how much the kids were playing the game, I became really interested in where we could go with this,” Bill recalls. “We discussed ideas for the concept and design, and went with it.”

So how does the game work?

Players each build an “incanquation”: a string of numbers and operators (plus or minus), so that the value of this incanquation equals the casting value of the spell they wish to cast. When they reach that value, they declare their spell cast, and the opposing mathemagician loses the amount of “magical strength” indicated on the spell card. They need to be sure though, because if they miscalculate, the spell backfires on them! When one player is reduced to 0 or less magical strength, they are unable to continue and the other player wins. The constant calculating and recalculating of and their opponent’s and their own incanquations means repeated mental arithmetic, or as Scott explains it “…the same skills as flash cards or worksheets, but it’s fun so the students will actually want to do it”.

It has been over a year in development, but the work has finally brought a concept to a reality. “There have been changes and tweaks along the way as we got feedback from play-testers at game designer meets like ProtoTO and playing at game cafés like Dicey Business, but it’s all part of the process of making a good game,” say Bill. “But,” Scott adds, “we were always encouraged by the feedback coming from the teachers, some of whom tried to buy our prototypes, they liked it so much! Our next challenge is just getting it out there to people who will benefit from it.”

And what’s next for the local game designers? Now that Mathemagician’s Duel is out and established, they’ll be working on a higher level version which includes multiplication and division, and then a third version with negative integers, so the challenge will grow as the players do.

Mathemagician’s Duel is now available in select stores and through the BSGames website. You can get more information about the game and the story behind BSGames at www.bsgames.ca.