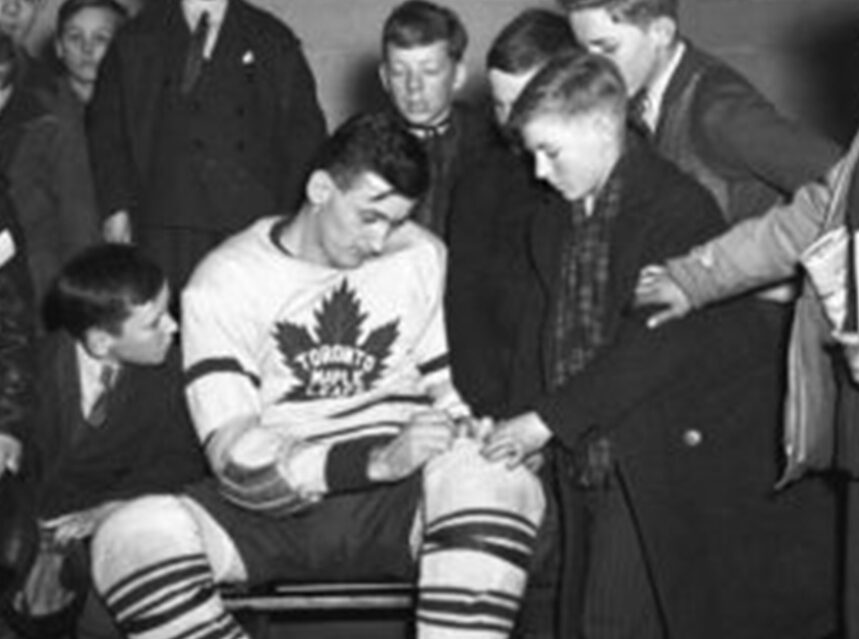 100: A Century of NHL Memories – This season marks the 100th anniversary of the founding of the National Hockey League (NHL), which was formally established at Montreal’s legendary Windsor Hotel; at the time, only four teams made up the league during its inaugural season.

Over the past century, whether you followed the Canadiens, Maroons, Leafs, Rangers, Bruins, Americans, Black Hawks, Oilers, Senators or the Mighty Ducks, hockey fans across Canada and the United States followed the fast-paced excitement of their favourite NHL teams in action, as they made their way game-by-game, goal-by-goal towards its logical conclusion: the winning of the Stanley Cup.

Hockey fans followed their favourite teams either by catching them live at games in their home arena, by reading accounts of games in the newspapers, or tuning in to the team’s local broadcasts on radio or television.

However, the greatest – and not so greatest – moments from the NHL’s past 100 years have been brilliantly recaptured, in a so-called “frozen in time” manner, by photographs that have appeared in books, newspapers, magazines or team game day program books. And the Hockey Hall of Fame in Toronto is the greatest repository of the NHL’s history in photographs, with more than three million snapshots lovingly preserved and stored within its massive archives.

Phil Pritchard, the Hockey Hall of Fame’s main curator, and journalist Jim Hynes had the insurmountable task of sifting through that three million-strong photo archive to choose 130 images for a book that represented what has made the NHL such a dominant sports league since 1917. And they accomplished that task quite admirably with their book 100: A Century of NHL Memories.

The book, which features photos in both black and white and colour, represent many aspects of NHL life on the ice, from the heroes, to the goalies, to the coaches, to the rough stuff, to the unusual moments, to that moment when players get the rare honour of hoisting the Stanley Cup over their heads.

When the reader glances at these chosen photos that make up the book, they can’t resist the tendency to take a closer look at some of the smallest of details that may not dominate the photo in question, but still plays a part in what is being portrayed in this photographic canvas. Case in point, a photo taken at the Montreal Forum before a game between Montreal and Chicago in January of 1959, as the players are standing during the playing of the national anthems. I couldn’t help but notice the uniforms of the Black Hawks, in which the players’ numbers were on their shoulders and the “C” and crossed tomahawks logo was midway on their sleeves (which were switched around by the 1960-61 season).

Other favourite photos in the book include goalie Glen Hall lighting up a cigarette (with a bottle of 7Up by his side) in his team’s locker room following a game against the Canadiens in 1957; the serious looks on the faces of the 1928 Stanley Cup champion New York Rangers during a reception with then-New York Mayor Jimmie Walker; a young Maurice Richard glancing at the taped straight blade of his hockey stick before a game during the 1940s; Frank Mahovlich and Andy Hebenton being mobbed by young autograph-seeking fans following a game at Maple Leaf Gardens as they waited to be called as two of the three stars of the game; Leafs coach Punch Imlach sipping champagne with the Stanley Cup in front of him after his team won it in 1963, with the message “No practice tomorrow” written on the blackboard behind him; and different points-of-view of two of the most famous Stanley-Cup winning goals in NHL history: Bill Barilko in 1951 and Bobby Orr in 1970.

The book is also a visual testament to how the art of photographing hockey games evolved over the past century, from the time when the photographer and a couple of spotlights placed at each goal zone allowed for shots that gave a rather shadowy, spotlight type of photo that focused only on the players; to remote control cameras that allowed more polished colour photos (and included the fans in the stands as background); to cameras concealed in boxes in the back of the goaltender’s net to give a unique perspective of the fast and furious action of today’s NHL.

100: A Century of NHL Memories is a book that is a must-have for any hockey fan past or present. Through the lenses of the game’s many legendary photographers, the book offers a treasure trove of classic images of what has made the NHL one of the oldest and most successful professional sports leagues, and how its greatest players and coaches made hockey a rite of winter for so many generations of fans who enjoyed watching the game, or were inspired to take up the stick and skates and follow their own pro hockey careers.