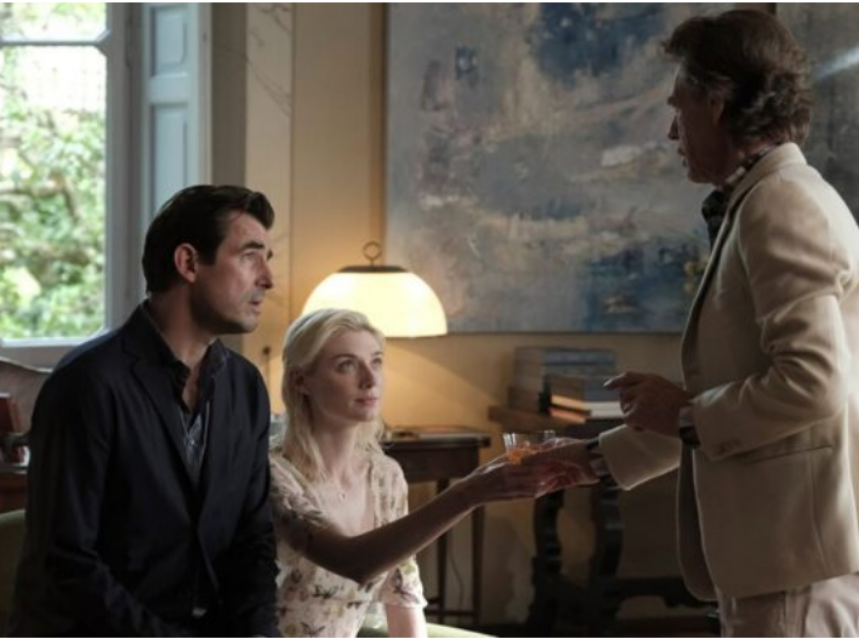 August 8, 2020 — The Burnt Orange Heresy movie review – The film starts with art critic James Figueras (Claes Bang) giving a conference which ends with a sarcastic look at the power of the critic. A point he has already made in one of his books. One of those attending the talk is American tourist Berenice Hollis (Elizabeth Debicki). She is somehow intrigued but also attracted by the critic. Eventually, they start a relationship. The young lady accompanies the critic who has been invited to stay at the Italian villa of a wealthy art collector—Joseph Cassidy, played by no other than Mick Jagger. Cassidy would have a proposal for James that might help him relaunch his somehow declining career. It may also restore James’s finances, which we see are in bad shape, as we could notice for a phone call he receives while driving to the villa. Of course, Cassidy would also get something of high value: a painting by renown, but now recluse artist Jerome Debney (Donald Sutherland).

Although at times some of the dialogues don’t seem much relevant to the story, we see that in the end, things start to come together, except for an important detail that might derail the critic’s plans. James is determined to get what he wants, and all points in the direction of final success. Cassidy also gets what he wanted, but more things need an answer, more than James would actually want. And probably some viewers too: director Giuseppe Capotondi deliberately leaves all in some suspense in this thriller with an open-ending that would certainly delight some viewers. In contrast, it would probably leave others frustrated.

“The Burnt Orange Heresy” is at times disorienting for the viewer, however in the second half of the film, we see the story coming into focus. One of the elements to highlight in this movie is the excellent cinematography by David Ungaro.  He equally delights us with images of the countryside as with ingenious shots like one reflected on a mirror, or the close-up of a fly getting into one of James’s nostrils. Adapted from the novel “Heresy” by Charles Willeford, this is a film recommended for those who may like a psychological thriller that at the same time explores the shady side of art. Note: There are some nudity and sex scenes.

Haegue Yang: Emergence opens Oct. 1 at the AGO

Things to do in Montreal this fall – Food, theatre and fun