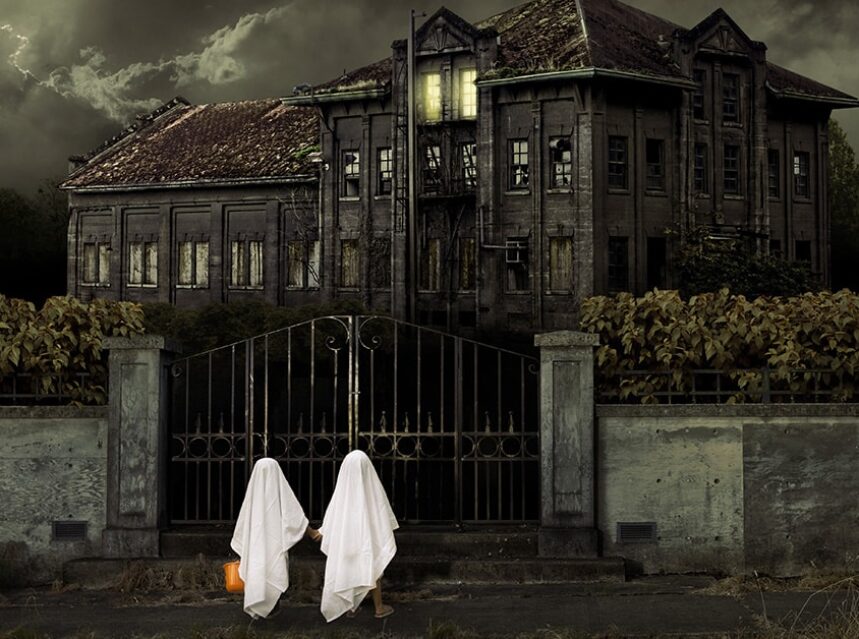 Origins of Halloween and traditions – October 31st approaches; the pumpkins light the streets at night; children are excited to dress up and go trick or treating… but do they know where the ghostly festival of Halloween began?

Halloween is the 2nd largest festival celebrated and in America, over $6 billion dollars are spent every year. It is quite humbling to think that such a festivity began 2000 years ago with the Ancient Celts celebrating Samhain, with bonfires and costumes to startle the ghosts.

On the contrary to Christmas, or even Easter, Halloween is not often a time of year that is linked to religion. However, this has played a big part in its evolution and development. It began as a Pagan religious festival (Samhain) to welcome in the harvest. It was believed by the Celts that this was when the spirits walked amongst humans, and not in a good way. Huge fires were built with animal sacrifices made and costumes worn, to scare off the spirits. They used the ‘special’ fire to light their hearths to keep the ghosts and winter out. Summer was over. Winter and the spirits were here.

Years later, when the Romans conquered the Celtic territory, they kept the Pagan festival of Samhain, but combined it with two of their own celebrations. Feralia – the passing of the dead, and a day to honour the goddess of fruit and trees, Pomona. Perhaps this is where bobbing for apples began, as an apple was her symbol.

Religion continued to play a part in this festival of ghosts, as Christianity began to spread. Samhain became All Saints Day, which was celebrated on 1st November. All Hallows Eve was the name given to the night before, 31st October, which eventually became Halloween. It was a day to remember the saints (hallows) and the faithful who had been lost.

It was in America where the commercialised version of Halloween that we know today began to spread. Parties were had where friends who share stories of the dead, and dance and sing around fires. In the middle of the 19th century, it had become a popular holiday that focussed on community spirit and less on religion. The following century, parents were actively encouraged to take out all superstition, fear and religion, which leaves us with the fun, child friendly activities we celebrate with today.

Halloween is a day that all the family can enjoy. There are no scary ghosts we need to ward off, no evil spirits walking among us, and no sacrificial bonfires. Instead, we have pumpkins to eat and decorate, costumes to wear and yummy treats to bake.

And it is interesting to know how some of these traditions have found their place in this once Pagan and Celtic festival as did many other similar traditions to do with frightening festivals from around the world in a recent study published by Betway Casino.

Carving Pumpkins – or Jack O lanterns as they are traditional known – is based on a fictional character named Stingy Jack. It is said that Jack tried to trap the devil and promise him that he would not go to hell before he let him go. However, when he died, Heaven didn’t want his soul either as he was not a nice person…so his soul was made to wander the earth as a ghost forever. He was given a lump of coal, in a carved-out turnip, to light his way around the Earth. Later, this became a tradition, with people carving frightening faces to scare off Jack and other evil spirits. Nowadays, it isn’t just scary faces that are carved. Creativity and imagination run wild!

Another tradition are the ghostly stories and tales that you tell, to scare your friends and family. Whether it be around a campfire, or snuggled up on a couch, there is always a friendly rivalry to tell the best one of when a ghost was seen. This dates to Samhain and the later All Saints Day when it was believed the ghosts and spirits joined the living for a day.

Is it Halloween if you do not see an array of different costumes across the community and of course, social media? In the 21st century, anything goes! It is no longer merely witches, ghouls and ghosts. It could even be a Disney princess. Wearing costumes has been a part of Halloween from the beginning. The Celts wore scary costumes to frighten off the ghosts. And they even tried to disguise themselves as the ghosts, to confuse the spirits.

Trick or treating is a favourite pastime of Halloween and on 31st October, the streets are filled with children in their fancy dress hoping to fill their pumpkin buckets with sugary treats. It began with food being left out to keep the souls of the spirits happy as they travelled the Earth. Slowly it progressed to sweets and of course, the dreaded tricks and mischievous pranks.

When you see red and green, you think Christmas. When you see Orange, or orange and black, you think Halloween. It is not merely because pumpkins are orange and witches wore black. Black is the colour of death, which 2000 years ago, was what started Samhain. Orange. Orange is the colour that symbolises the Harvest and of course, autumn.