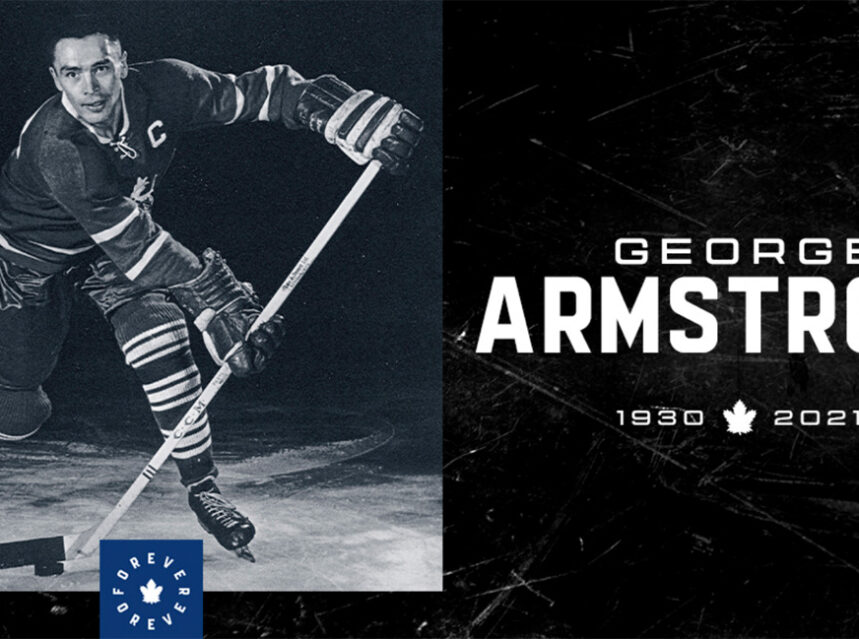 “The Toronto Maple Leafs mourn the passing today of George Armstrong at age 90. As one of the first players of Indigenous descent to play professional hockey, George first signed with the organization in 1946 and was a member of the Maple Leafs family for 75 years. He distinguished himself as a player, captain, coach, assistant general manager, scout, community ambassador and alumnus,” the Maple Leafs said in an official statement.

In the official statement, the Maple Leaf explain the importance of George Armstrong to the storied NHL franchise. “Skating his entire 21-year NHL career with the Maple Leafs – and 12 as their captain – George helped Toronto capture four Stanley Cups. He was named one of the One Hundred Greatest Maple Leafs of all-time, is an Honoured Member of the Hockey Hall of Fame and has had his number retired by the club in addition to being a hallowed member of Legends Row.

“George is part of the very fabric of the Toronto Maple Leaf organization and will be deeply missed,” said Toronto Maple Leafs President & Alternate Governor Brendan Shanahan. “A proud yet humble man, he loved being a Maple Leaf but never sought the spotlight even though no player played more games for Toronto or captained the team longer. Always one to celebrate his teammates rather than himself, George couldn’t even bring himself to deliver his speech the day he was immortalized on Legends Row.”

Armstrong was born in Bowland’s Bay, Ont., to an Irish father and an Iroquois mother, and he developed his hockey skills in Falconbridge near the Sudbury nickel mines where his father worked.

Armstrong, played his entire career — 21 seasons — with the Toronto Maple Leafs including 13 seasons as team captain. In 1,187 games, the Leafs’ #10 scored 296 goals and 417 assists over 21 seasons for the Leafs, including 13 seasons as team captain. The right-winger also contributed 26 goals and 34 assists in 110 playoff games.

Armstrong passed the 20 goal plateau four times during his NHL career but was best known for his leadership and work ethic. With Dave Keon by his side the two forwards became penalty-killing giants.

When retiring in 1971 he had played more seasons, regular season and playoff games and served as captain longer than any player in Leafs’ history.

After retiring in 1971, Armstrong also coached the Toronto Marlboros to two Memorial Cup victories in 1972-73 and 1974-75 before joining the Quebec Nordiques in 1978 as a scout. He then rejoined the Maple Leafs organisation becoming the assistant GM as well as a scout in 1988. Armstrong also took on the role as interim coach for the final 47 games of the 1988-89 season when John Brophy was fired.

The following season, George Armstrong returned to his role as a scout for the Leafs.

Armstrong eventually settled in the Leaside area of Toronto and was inducted into the Leaside Sports Hall of Fame in 2015.

The NHL Alumni also said they are deeply saddened by the loss of George Armstrong and that “When retiring in 1971 he had played more seasons, regular season & playoff games & served as captain longer than any player in Leafs’ history.”

In his own words, the final paragraph from George’s unread speech read: “Hockey is a great game and I love it. I am part of a fading generation that you will never have again. Every one of us is one of a kind, that will never be repeated. To all of my friends and acquaintances, thank you for your advice and direction, that helped make me who I am today … a very, very happy person.”

The Toronto Maple Leafs extend their deepest condolences to George’s wife Betty, their children, grandchildren and the entire Armstrong family.