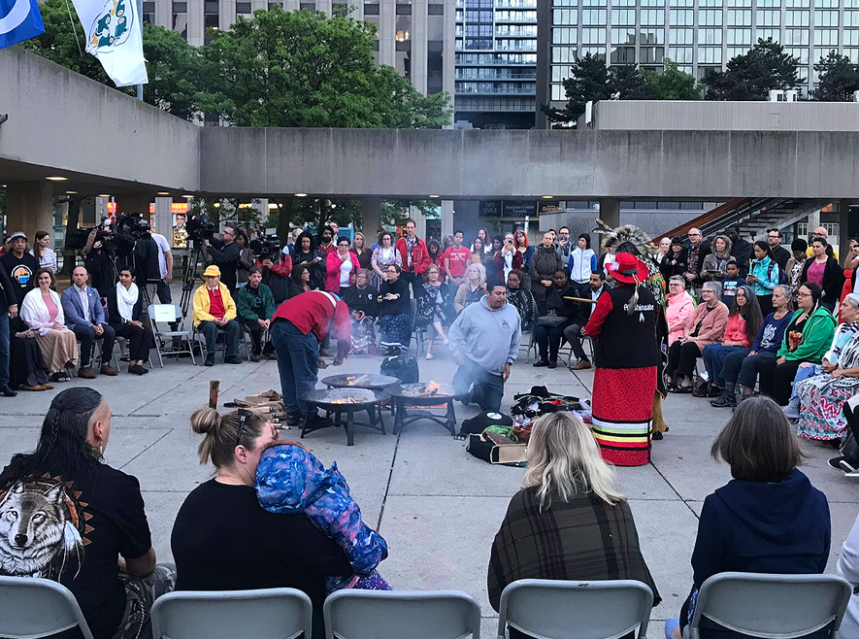 This year, the Sunrise Ceremony was led by Elder Garry Sault of the Mississaugas of the Credit First Nation and featured a traditional Water Ceremony and teachings from Knowledge Keeper Kim Wheatley and traditional drumming by Young Creek Drummers.

“The Mississaugas of the Credit are thankful to be part of this year’s National Indigenous Peoples Day Sunrise Ceremony. This is an important occasion where we can come together as a community to celebrate, give thanks and reflect. I look forward to continuing to walk the path of friendship and healing together with the City, as it continues its journey towards reconciliation.”– Chief R. Stacey Laforme, Mississaugas of the Credit First Nation

“It is an honour to proclaim National Indigenous Peoples Day and celebrate the diverse heritage, cultures and traditions of First Nations, Inuit and Métis Peoples with the return of the annual sunrise ceremony to Nathan Phillips Square. Today, we also reaffirm our commitment to advancing truth, justice and reconciliation, as well as working together with Indigenous community members and leaders to ensure Toronto is a place where Indigenous people can thrive.”– Mayor John Tory

National Indigenous Peoples Day was first proclaimed in 1996 to celebrate the unique heritage, diversity and valued contributions of First Nations, Inuit and Métis Peoples across Tkaronto and all of Turtle Island to help build stronger relationships with Indigenous communities, rooted in mutual respect and understanding. It is also a time to remember the unmarked graves across the country that continue to be recovered and mourn those who never returned home from residential schools, as well as recommit to actively working towards truth, justice and reconciliation in their memory.

The City remains committed to advancing truth, justice and reconciliation and is working closely with Indigenous partners and the Indigenous Affairs Office to implement the City’s first Reconciliation Action Plan.