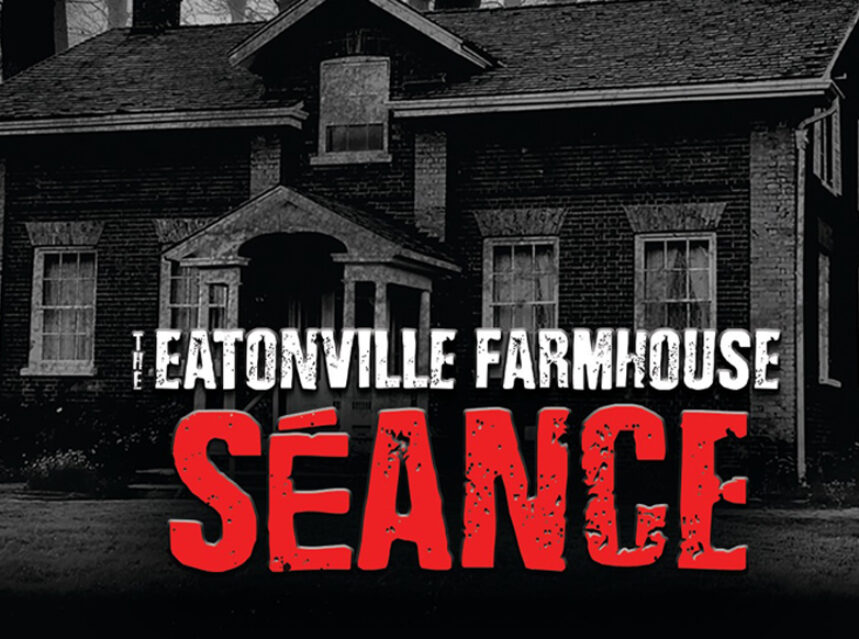 On a “Scary Scale” from 1 to 10, with 10 being almost-peeing-your-pants scared, mentalist Jaymes White says his authentic Victorian Séance is a 10! And Torontonians can experience it first hand when it runs nightly this fall at Eatonville Farmhouse in Etobicoke.

“This is a unique one-of-a-kind event that is like being in your own horror movie!” states James White. “Our seances have been called ‘the scariest gatherings in Canada’. The reviews tell us that people sometimes have trouble sleeping for several nights afterwards or they must sleep with the light on. They start to question their own reality. They don’t know what has happened and don’t believe what they experienced. It opens their mind up to new possibilities.”

It seems many people like to be scared sh—less. White mentions he has plenty of repeat customers year after year and some guests come several times during the month-long nightly séances each year. This year’s Victorian Séance runs nightly from October 1st to November 27th at Eatonville Farmhouse, 450 The West Mall, in Etobicoke. Hailing from Ottawa, White has been holding sold-out séances in Toronto since 2015. This year’s séances will accommodate 13 to 16 guests per night, ages 18 plus, with social distancing and COVID-19 protocols in place.

“We chose the historic Eatonville Farmhouse as this year’s venue as it was suggested by one of our clients and it’s one of the few remaining Victorian era farmhouses, making it a perfect location to hold an authentic Victorian séance,” says White. “This year it’s not so much about the location but about the objects within it. They are part of the Campbell Collection which are known to have a dark past. This includes dolls, jewellery and other objected that are believed to be haunted.”

White owns a personal collection of almost 400 ‘haunted items’ including a stuffed owl that watches over him as he sleeps. His doll, named Andy, was used at last year’s séance. Left in a hallway overnight, the security video captured Andy suddenly moving on its own at 2 a.m. —no strings attached. “It could have been a draft, but one night after we had wrapped up the séance, I swear she turned and looked at me! It was the last night of the séance schedule and the last time I would be using her, and maybe she was acknowledging her part in a job well done.”

The evening begins the group meeting at The Red Cardinal Tavern in Etobicoke (I think I would need a drink before and after this event!). They then take a short walk to the Eatonville Farmhouse. “I start by giving a brief history of the house and then we take a tour,” explains White. “If anyone feels, sees or hears anything, they are asked to share it with the group.”

With many years of sold-out séances in Toronto, White says he has thousands of stories of paranormal encounters and ‘spooky’ occurrences. “During a séance one woman shared how her father had passed away recently and she wanted a sign that her father was okay. She told us that a few days later a white feather had landed on her shoulder out of nowhere, and she took this as a sign that her father was okay. After the séance we pushed our chairs back and—I am not kidding—there on the floor in front of the woman was a white feather! She started crying and then several people in the group started crying. We were all blown away. I’m not even sure how to explain what happened.”

An exercise that is commonly used during the séance is called Spirit Writing. Participants are asked to write down the first thing that comes to their mind, whether it makes sense or not. “People often go into a trance-like state and write something down they don’t even realize they are writing,” explains White. “One night I heard a girl upstairs crying so I went to see what was happening. She said she felt a negative presence in the room and a certain sadness, and then suddenly she felt okay. She told me her dad had passed away that year and she felt her dad was in the room watching over her and protecting her. Later that night when the participants opened their envelopes to share what they had written, one man in the group had written the words “Bear—Mr. Cuddles”. The words meant nothing to him. He said they had just come to him. However, the girl who had been crying upstairs yelled out—’the last thing my father gave me before he died was a stuffed bear named Mr. Cuddles!’ How do you explain this? The chances of this happening are one in 10 million. That story still gives me goose bumps!”

White makes it clear he is not a psychic or a medium. His lifelong fascination with the human mind has given him an understanding of human behaviour. He is a master at manipulation, using hypnotism, the power of suggestion and mind control in his work. He can predict the behaviour of crowds, including audiences.

“As a mentalist, I use science and psychology to predict human behaviour. My background is that I train law enforcement officers on mind reading techniques to be able to read body language and watch for patterns of behaviour to improve their interrogation techniques. I also work with universities and deliver seminars which focus on memory development for students. I do mind-reading shows to show others that knowing how to read people can tremendously help their career in sales, real estate, law enforcement and more. I teach people how to tell is someone is lying or not. It takes practice, but there are millions of clues and patterns if you know what to look for.”

At age 8, Jaymes White realized he had a gift. “I started noticing patterns of behaviour and would notice things about people—how they walked and talked, what kind of watch they wore, and then I would try to profile their personality. I’m not sure if I would call it a gift; it just happened. I was a shy and introverted child, so it wasn’t until I was about 18 that I began to perform, doing shows at charity events.”

When it comes to his string of sold-out seances, White says every night is different. “Every group dynamic is different depending on the energy they bring into it,” he says. “This séance is not really about people coming to Eatonville to connect with their loved ones, because why would they be in this house? It’s about connecting with objects within the house and being open to what unfolds.”

The website adds: “This soul-shaking psychological experience is not intended for the weak or faint of heart. Whyte adds: “This is the smallest Séance group size we have ever offered so it will be our most interactive and exclusive experience to date.”

Tickets are $66.66 (yes you saw that right bwwwhahahaha) per person, available at www.jaymeswhite.com/seance/