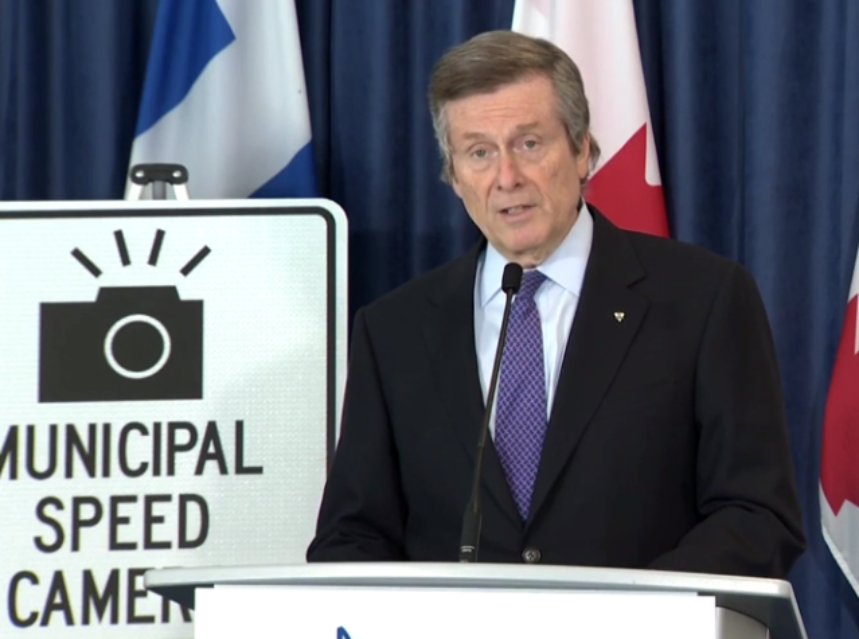 TORONTO, ON., August 2, 2020 — The City’s 50 Automated Speed Enforcement (ASE) cameras issued a total of 7,645 tickets between July 6 and 20, 2020, the first two weeks following the start of issuing tickets. While two cameras issued a total of 299 erroneous tickets between Monday, July 6 and Wednesday, July 15 due to errors in programming on the side of the City’s ASE vendor.

The City of Toronto says that during the first two weeks of implementation the highest speed detected was 89 km/h on Renforth Drive near Lafferty Street (Ward 2 – Etobicoke Centre) where the posted speed limit is 40 km/h.

The ASE camera on Renforth Drive issued the highest fine at $718. It also issued the most tickets at 890, representing 12 per cent of all tickets.

According to the data, which takes approximately 10 days to process and report, the number of repeat offenders during the first two weeks following the start of issuing tickets was 591. The most frequent repeat offender received a total of eight tickets for speeding at Trehorne Drive near Duffield Road (Ward 2 – Etobicoke Centre).

The total payable fine amount includes a set fine, which is determined by Schedule D under the Provincial Offences Act, a victim fine surcharge and applicable court costs. Offenders are only fined – demerit points will not be applied.

The Automated Speed Enforcement program aims to increase road safety, reduce speeding and raise public awareness about the need to slow down and obey posted speed limits. The 50 cameras are installed city-wide on local, collector and arterial roads in Community Safety Zones near schools. Each ward has two ASE cameras that will capture and record images of vehicles travelling in excess of the posted speed limit. Signage is installed in advance of all ASE locations so that motorists are aware of their presence.

To ensure full transparency, the City is making the public aware of one issue that was identified and has been immediately corrected.

On Thursday, July 23, the City learned that two cameras issued a total of 299 erroneous tickets between Monday, July 6 and Wednesday, July 15 due to errors in programming on the side of the City’s ASE vendor (the erroneous tickets are not part of the total 7,645 tickets issued during the first two weeks of ticketing).

The camera on Derrydown Road (Ward 7 – Humber River-Black Creek) issued 277 erroneous tickets after it was programmed to monitor for a speed limit of 30 km/h in a 40 km/h zone. This is a result of the vendor mistakenly programming for an incorrect speed limit, without the knowledge of the City. The camera on Elkhorn Drive (Ward 17 – Don Valley North) issued 22 erroneous tickets after it was programmed to indicate it was monitoring for the wrong direction of travel. Similarly, this was done by the vendor without the City’s knowledge.

City staff and the vendor responded immediately by conducting a thorough investigation to ensure that no other ASE camera was issuing erroneous tickets.

Recipients of the 299 erroneous tickets will receive a notice in the mail advising them that the City will be cancelling these tickets as they were issued in error and that no action will be required on their part. Residents who paid an erroneous ticket will receive a refund, or their payment will be returned. To inquire about payment refunds or returns, residents can send an email to poacourt@toronto.ca.

Following the receipt of an incident report from the vendor, staff have implemented several corrective measures to prevent such programming errors from reoccurring. Provincial Offences Officers were also provided with additional training.

More information about the program and a map of all locations is available at toronto.ca/ASE.

Haegue Yang: Emergence opens Oct. 1 at the AGO

Things to do in Montreal this fall – Food, theatre and fun