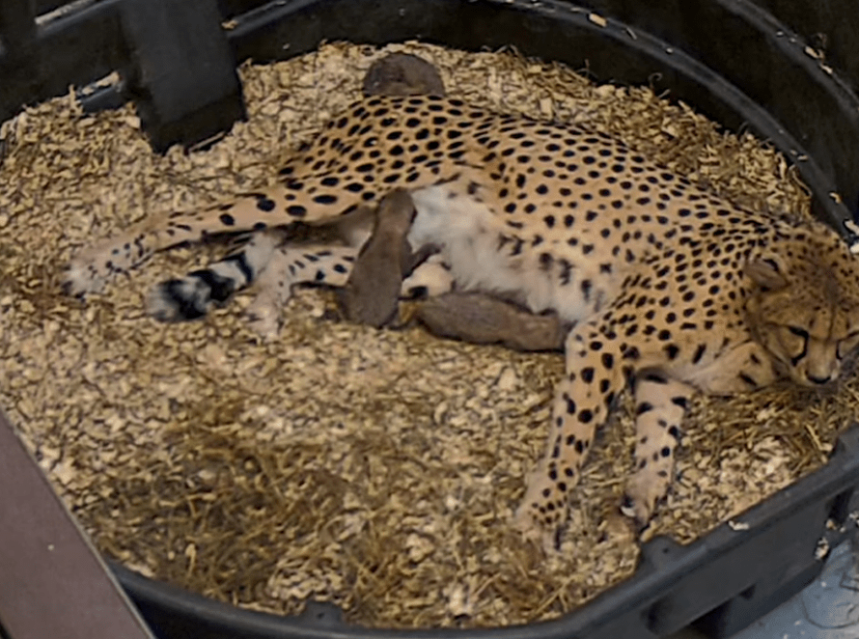 TORONTO, ON, Friday, January 28, 2022: Your Toronto Zoo has just shared some exciting news about the arrival of three adorable cheetah cubs born Monday January 24! Emarah, a 4.5-year-old female cheetah and first-time mom, gave birth in the early hours of the morning after a 92-day pregnancy.

A zoo spokesperson says, in preparation for cubs, the Wildlife Care team set up a maternity den for Emarah, selecting a quiet space in the cheetah house and furnishing it with a large nestbox lined with a thick layer of bedding.

“Emarah began exhibiting signs of labour on Sunday, including restlessness and lack of appetite. The team monitored the labour using video cameras in her habitat to ensure her privacy. She gave birth to her first cub just after 3:30 am, followed by a further three cubs over the next few hours. Unfortunately, one of the cubs did not survive, but the remaining cubs appear to be doing well and have been observed nursing and wriggling around close to their mother,” says zoo spokesperson.

Earlier this week Toronto Zoo announced that they we will be re-opening February 10, 2022!

When cheetah cubs are born, their eyes are closed, and it will be about a week before they begin to open them to have a look around.

The zoo has cameras set up so they can monitor at a distance.

“During this time we minimize disturbances to give mother and cubs time to bond. The cameras allow the team to monitor Emarah and her new family as she navigates her maternal duties for the first time, and we are pleased to say she is doing very well – a real natural mom!”

The zoo spokesperson Amy Naylor says Emarah “has been very attentive and has been seen grooming and nursing the cubs, both of which of which are excellent signs for a first-time mother. She also has been comfortable enough to start leaving the den to feed and to stretch her legs.”

Naylor says Unless there is cause for concern, it will be a few weeks before the vets will do their first full quick check on the cubs. Until they are fully vaccinated and the weather warms up, the new family will remain cozy in their indoor habitat; once they are several months old, we will introduce them to the outdoor habitats, including the main cheetah exhibit where guests will be able to visit them.

Emarah was part of the last cheetah litter born at the Toronto Zoo. While her brothers and sister have moved to other accredited zoos as part of the Species Survival Plan (SSP) Program through the Association of Zoos and Aquariums (AZA), Emarah remained in Toronto . Emarah and her new family are important as her genes are not widespread in Cheetah populations in accredited Zoos. The SSP makes recommendations to best manage the cheetahs in our care. These cubs represent that next step in terms of preserving these important genes to ensure they are protected for the future.

While the zoo was closed in support of provincial public health measures they took the opportunity to work on some exciting new elements here at the Zoo including the installation of a new network that will include site wide WIFI; completing washroom renovations at the Africa pavilion; and providing a vaccine booster clinic onsite. We will continue to provide a vaccine booster clinic onsite during our regular Zoo hours, making it even more convenient for Members and Zoo guests to get their 3rd doses.

The extended closure and extending the closure enables the zoo to complete these projects. Guests also can look forward to access to free WIFI in the coming months and a Zoo App and supporting experiences in the months ahead.

Nayor says, “We will be implementing a 50% capacity limit in our indoor spaces, as well as a mandatory mask policy indoors and in outdoor areas where guests are in close proximity to particularly high-risk animals. Please have your QR code proof of double vaccination with you to show our guest relations team upon arrival.